Sorry I didn’t get to the other two races last weekend. Dallas and OKC Rock’s Day 2. I sucked the whole weekend. But, they were both great races.

Friday night in Dallas was crazy hard. There were 80 starters and less than 30 guys left in the front group after 2 laps. That is 2 laps. It was nuts. I lasted about 20 minutes. I was never good. Done at the 4th corner, 1st lap. I can’t say I’ve ever experienced that before. I did get to catch up with some old friends from Topeka that live in Dallas, Rod and Charlene Lake. They rode with us back in the day and have been moving around following her job with AT&T. They are the same as before. I never realized it much, but most people I know that grew up in Kansas stay pretty normal no matter where they end up. It’s nice.

The Sunday race in Oklahoma City went badly for our team. Especially after Brian had won the day before. The end result was that we all missed a 10 rider break. That has virtually never happened to us before. But, that is how it goes sometimes. I was riding like shit. Brian was going good, but had a mental fart. Bill was there and got popped. Chris was in my boat. I ended up 15th and Chris was 18th. It was good money all the way down to 20th, so we salvaged something. But, everyone was so hot that the remaining places weren’t that highly contested.

We hit some incredible rain driving back on Sunday night. So heavy, that we had to stop in Wichita for a couple hours. We ate pizza and drank beer. Why not? It ended up raining over 11 inches North of Oklahoma City. That is almost a foot.

I’m driving out to Colorado at 7 am tomorrow. I need to do something to get out of this allergy/whatever funk. I had a cortisone injection in my shoulder this week, so missed Nature Valley. I wouldn’t have been in control of my own destiny, so it is probably for the best. But, I hate it anyways. I’m going to stop in Salina, Kansas and get a blood test. I should probably get one on the way home and see how the altitude affected it.

So, up to the mountains. I’m taking 3 bikes-road bike, 29’r and regular MTB bike. I think I’ll try to ride some of the Breckenridge 100 laps while my shoulder is all doped up. 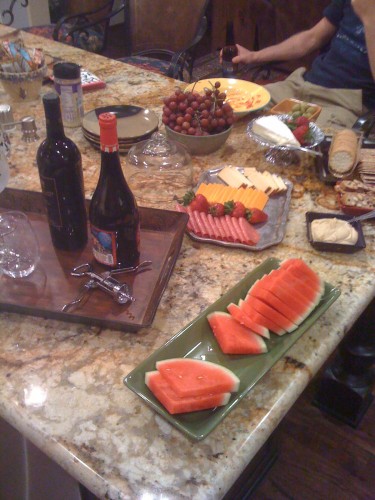 How about this spread to come back to at midnight after a hot criterium? 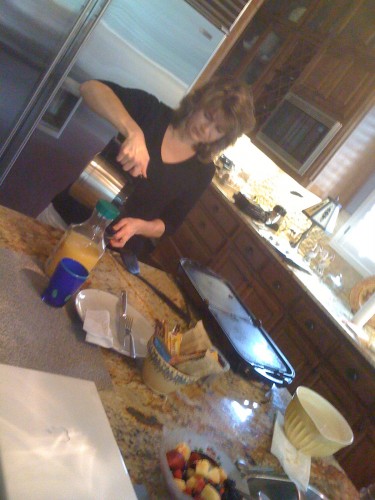 Charlene making us breakfast from 9 am to noon. Chocolate Chip pancakes, fresh fruit and great coffee. I was full from the night before. 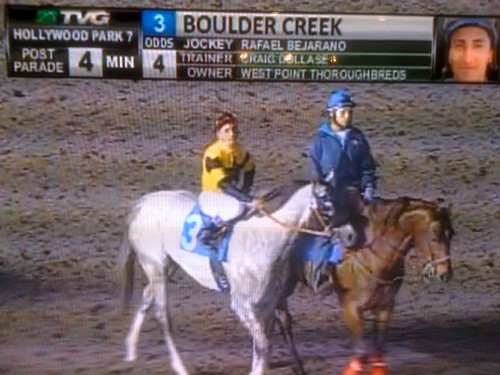 We got to watch Rod and Charlene's horse race at Hollywood Park at midnight after the criterium. They are partial owners of Boulder Creek. Rod says they maybe own one hoff. 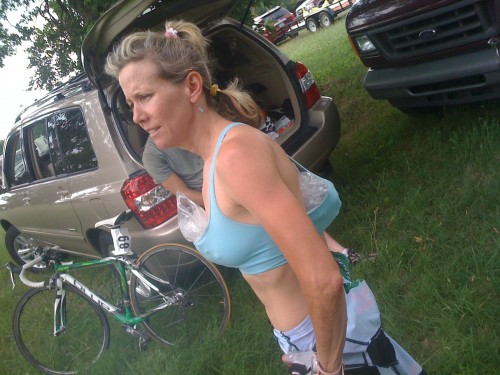 Catherine's idea to keep cool before the criterium on Sunday. I had to take the picture. 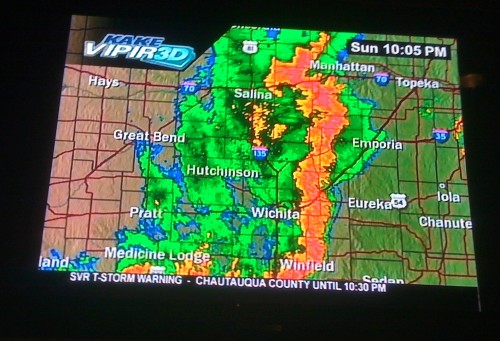 Photo of the radar at the pizza restaurant in Wichita. Ugly.