One of the strangest parts of the sport of bicycle racing is the fact that the strongest rider doesn’t necessarily win the race. I love this aspect. It keeps everyone on their toes. It adds strategy. Tactics. I’ve ridden both these races lots and lots of times. It was easy to identify the most likely outcome.

I didn’t ride in the morning with all the guys. I had hardly recovered at all from Snake Alley the day before. We had moved up to Quad Cities and were staying with Jeff Bradley once again. (There was going to be a lot of meat consumed the next two days for sure.) Driving to Muscatine, just leaving Davenport, we saw a guy with his spare wheels in bags, riding to the race. It is 30 miles. I thought we should ask him if he wanted us to take his wheels. It turned out to be Eric Marcotte, 3rd from Snake Alley the day before. He’d won or finished 2nd in Muscatine the previous two years. He said, “hey, give me a ride!” Dead battery issue with his ride. He paniced and decided to ride. With his spare wheels. We had room.

Muscatine’s course is a mile loop in Weed Park. It has a longish climb and the finish is tricky with nearly a U-turn 100 meters from the finish. It was hot again of course. I held to my statement of not warming up. I rode from the car to the start line and sat in the shade. It didn’t work that great because I felt bad right from the start. I got better, but not better enough to actively participate in the race. Well, that isn’t quite true. I was good enough to get to the front when my team mate, Brian Jensen got into the winning move. And good enough to stay there until the end of the race. But, not without some major efforts. There were originally 10 guys in the break. It got down to 7 through attrition and Chris Uberti, Panther, making, according to him, a “bonehead move” around a corner. He glanced back coming out of a corner and drifted into the curb and high sided. He was thrilled to find out there were no free laps at this race. Brian attacked up the climb going into the bell lap. It turns out none other than Eric Marcotte was glued to his wheel. Brian missed judged the effort and Eric ended up winning solo. Brian was caught by Adam Bergman, Texas Road House, and Chad Burdzilauskas, Kenda Pro Team, so he ended up 4th. He was having a good day riding, so that was fine. I’d rather be riding great and finish fourth than be riding bad and finish 2nd. 1st is a different deal.

I ended up 4th in the field sprint. Emile Abraham, AreoCat, did his best to make sure that no one was going to get by him to contest the sprint with his team mate, Andrew Crater. This would be the first of two times that occurred in the next two days.

Quad Cities is a flat 3/4 mile criterium with 8 corners. Kind of a figure 8. It was going to be a field sprint. Almost for sure. There was no wind and it wasn’t hot enough to weaken the field. Lots of small moves got off the front. The most dangerous was when Paul Martin, Panther and Eric Marcotte took off 5 or so laps to go. I couldn’t figure out why Eric would make such a move when he, in theory, has the fastest sprint of anyone in the race. He’s won the race twice before. But, he did make the move and it didn’t work out. They were caught in the last 1/2 lap. Texas Road House had two guys at the front pulling, with 3 guys from AeorCat behind them. I was too far back in 15th or so with a 1/2 lap to go and ended up at the very front at the wrong time. In retrospect, I should just jumped from here. I ended up being in the wind the whole way to the finish anyway. But, I decided to ease up and try to slot back in. Crater was getting a leadout from Juan Pablo Dotti. Emile was on Crater. I ended up drifting back to around 6th, but by then I realized I needed to be in the lead so, jumped again. Coming by Emile, I had my 2nd encounter in two days. He was “protecting” Crater’s wheel once again. It wasn’t anything dangerous, just bothersome and effective. I got to Crater’s wheel on the 2nd to last corner, but wasn’t at the correct angle. I ended up behind Chad Burdzilauskas for the final corner. I was going under him when he hit his pedal in the corner. He didn’t come close to falling, but it was enough for me to grab a handfull of brake and I ended up scrubbing so much speed I ended up 6th. I lost 3 places in 75 meters. I was not going to win so it didn’t really matter. I’ve won the field sprint for 3rd the last two years, so I had it in the back of my mind that maybe I could win the race. I am not going well enough to overcome tactical mistakes.

So, Tulsa Tough NRC starts on Friday night at 9:15 pm. Two night time criteriums and then a hard race on the river with a pretty big climb. It is supposed to be over a 100 degrees all three days. Should be fun as usual. 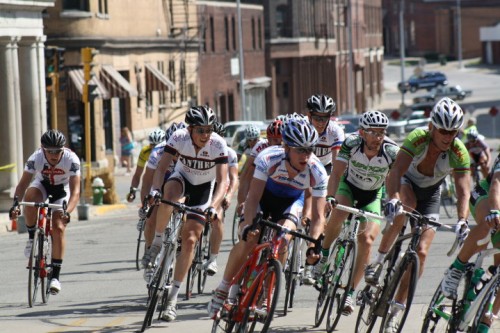 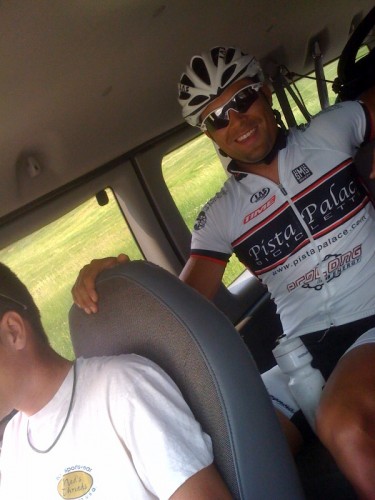 Eric, all smiles, in air conditioning. 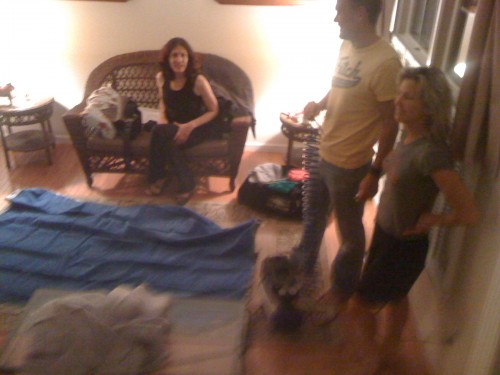 Jeff and his air compressor setting up Monique's sleeping spot.

One thought on “Musacatine and Quad Cities Criteriums”