The race went way better than I thought it would go and way worse than I would be happy with. Skipping the Friday road race was the key. I really didn’t even warm up. I rode 5 or 6 laps of the course a couple hours before the race and called it good. I knew from those laps that it was going to be a struggle. It was pretty hot and miserable. Tail wind up the climb which made it all that more hot.

There were 120 starters in the PRO 1-2 field. The race is only 20 laps of a .9 mile course. But, that is more than enough. It is very hard. I got called up, which helps a ton. I rode the first 3 or 4 laps in the top three up the hill, just to stay out of trouble. I had told Brian that I thought I would only be good for 5 or 6 laps and then it was up to him. He didn’t want to ride hard too early. I have won the race a couple times. Brian has finished 2nd 3 times. He wanted to win. And that was my only priority.

The next couple laps it went pretty hard and some Ukrainian National Champion from Amore Vita Pro Cycling Team, took off. I knew he would be the unknown rider to worry about. Paul Martin, Panther, recognized this too and went. I wasn’t even close to good enough to think about trying to bridge. Brian, in retrospect, probably waited too long to go. He made it 80% up to the front two, but never connected. Panther had a couple guys at the front slowing down the field of now only 20 guys. Brian rode 3 or 4 laps off the front before getting caught.

So, we kept going around as the Ukrainian guy and Paul rode away. Our group would split up and then get reconnected over and over again. Brad Huff, Jelly Belly, might of rode the most consistent race of anyone. He was never in the front split, but was always there. Bryce Mead, Adam Bergman and Pat Lemieux from Texas Road House kept trying to get our group going, but it was a lost cause. Everyone was overheated and had held up the white surrender flag.

Brian got away in small groups a few times the last 10 laps. With about 5 to go, I got a little twisted on the 2nd switchback entering the Snake. I got up against the stone curb and had to unclip. I’ve ridden this race close to 15 times and have never had that happen, even though it isn’t that of a uncommon sight. I tried to remount cyclo-x style, but couldn’t get moving. Most the guys that have problems just run the hill. (Paul Martin had to do this very thing towards the end of the race.) So, by the time I got clipped back in, I was off the back of the pitiful field. I had to chase just one lap, but that was enough to toast me for the last 3 laps. I was pretty okay up until then.

Two guys bridged up to Paul, when he was having the fore mentioned problems, so we were left going for 5th. I went up the hill the last time close to the front, but kind of had a shifting problem and mental brain fart the last couple corners and ended up 8th. It didn’t really matter. If you would of told me before the race I was going to finish 8th I would of told you there is no way. But, afterwards, 2nd seems doable. But, that didn’t really matter either. Races like the Snake Alley are races you want to win. Like Chequamengon. 1st is the only acceptable place.

Amanda Miller came home to win the women’s race for the 2nd time. She just got back from France this week, so it wasn’t a gimme. It’s always nice winning in front of your friends and family. Congratulations to her.

I have to say that I’m not too big on this Ukrainian guy coming to cherry pick the races here. Roberto Gaggiolli set it up. I like Roberto. I’ve been getting beat up by him the last 3 decades. But, there has always been too much suspense floating around his name. Then and now. So, when some guy, that doesn’t speak English, that I’ve never heard of, comes and spanks everyone at a regional race that pays $2,000 to win, I have to call foul. Even if there isn’t a foul to be called. I guess that is how it is nowadays.

Racing in Muscatine Iowa at 4pm. Gonna be around 90 and humid. I’m just getting out of the car, getting my number and clipping in when the gun goes off. I’ll warm up the first 20 minutes of the race. 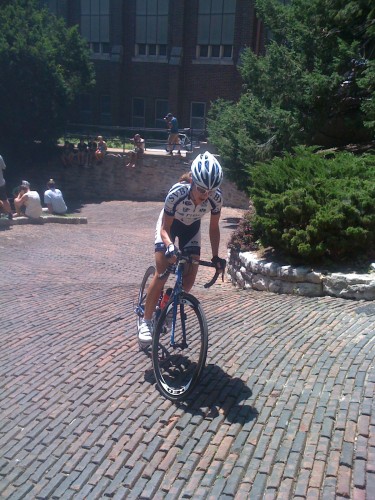 Amana rode the whole race solo. Here she is towards the top of the climb.

Here are some Giro photos from the final day courtesy of Trudi. 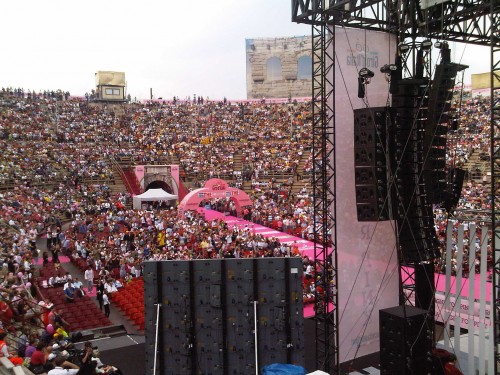 Inside the arena for the TT finish. 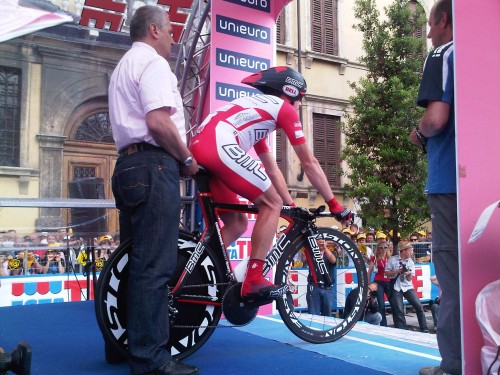 Cadel at the start. 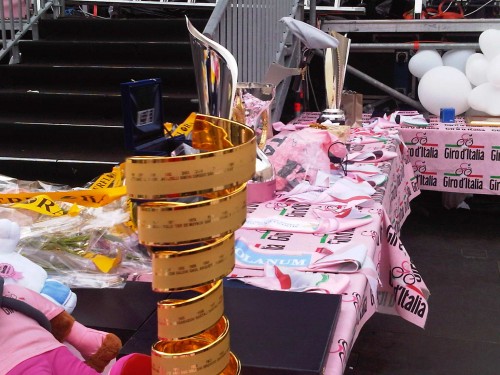