I received the email below from Dewey Dickey last week. I almost cried after reading it. Anyway, I asked Dewey if he wanted to write something. He is obviously a bit overwhelmed. Second guessing his decisions, as all of us would. You guys can judge if you want. I’m just sad. I am going to miss having him at the races.

Steve,
Just wanted to let you know I’m suspended again for 2 years. USADA showed up at my house late last night and I refused the test. My TUE’s have not been approved yet this year so I refused. I would have been positive anyway. I had them in place from ’06-’08. In ’09 I reapplied with nothing being different but they kept asking for more info. I finally gave up. This winter I started the process again. They asked for more info and my doc faxed it in. Hadn’t heard anything as of yet, so figured it was still in the process of being either approved or denied.

I’m going to miss not being able to race with you and Brian anymore. I’ve always respected the hard ass way you race. Don’t be to hard on me on your blog.

On the 11th on May at 9:30pm USADA showed up at my house and asked for a drug test. I refused to give a sample. I think they wanted blood too, but not sure. The reason I refused the test was because at that time I would have returned a positive test. After my health issues from ’04-’05 I had to start taking 4 medications, 3 of which would be considered banned substances. When I returned to racing I applied for a TUE and was granted one straight away. The TUE’s were good for 3 years. They expired in May of ’09 and I reapplied sometime that late winter/early spring. They now were asking for all sorts of additional documents and information from my doctor. I can’t quite remember, but I think they asked for a 3rd set of documents and at that time I said forget it. So this year I applied and once again they kept asking for more. I didn’t understand this as nothing has changed with my health and it never will change, at least not for the better. Anyway, I talked to my doc’s assistant and she got together the documents they were asking for and faxed them in. I received an email confirmation that they had received them and I would hear from them in about 3 weeks. I think that was around the 9th of April. I knew it was taking sometime, but just figured they were still in the process of getting them approved. So, when they showed, I knew I didn’t have them and was really dumbfounded that they would do something like that, knowing I didn’t have them and knowing it would be a problem for me. So, I had to make a quick decision, I thought it would be best to refuse the test knowing I wouldn’t pass anyway. Maybe that was a bad choice, but it’s to late now and I’m looking at a 2 year suspension.

Oh yeah, I just got an email confirming my TUE’s have been approved for another 3 years. GO figure. SO that’s what happened. I have some decisions to make on regards to my next step. I’ve tried calling the ombudsman and also USADA but haven’t been able to get through to anyone yet. That’s all for now. 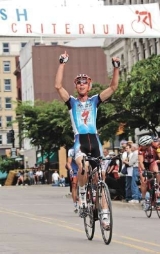 Dewey winning Snake Alley in 2008. Brian and I in the background.