I wrote a post a while back about how Kansas was ranked 1st in the country for best roads. Not in Topeka. Our city roads took a beating this winter. We were riding out 37th street today and it was a mine field of potholes. I got a call after the ride from Bill saying that Bob Lock had crashed leaving my house on 29th street and they took him to the emergency room in an ambulance. He was descending towards a stoplight at the bottom of a hill and caught a parallel seam with his front wheel and got instantly thrown on his side.

So, I went down to the hospital to check to see if he needed anything. Turns out he didn’t have his phone, so he had no numbers. Weird how that is now. Anyway, it turns out he broke his hip. Pretty bad. Like bad enough that the super hyper ortho doctor didn’t feel confident enough to operate on him and is sending him to Kansas City to KU Medical to have them do it.

Bob was super calm all night. And, he said, not in hardly any pain. It was impressive. They gave him a sandwich to eat at midnight. The last supper before anesthesia. I’m crossing my fingers for the prognosis after the operation tomorrow. It is amazing how fast things can change up on you. 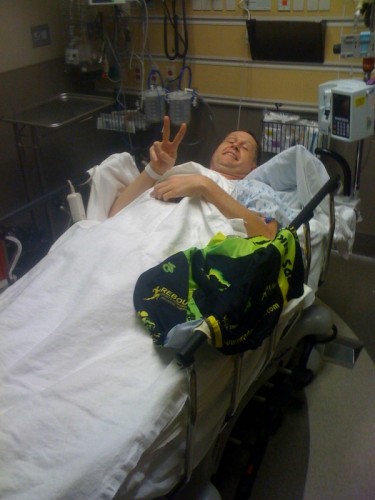 Bob -all smiles tonight. Must of been the Demerol.