I was talking to Floyd Landis during Joe Martin about how strange bike racing life is. (You know you have to do something during a 4 hour tempo session.) I was thinking how it is kind of happenstance where you end up in life. Or what race you are racing. Here we were racing a 4 day stage race in Northwestern Arkansas. That is while the Giro is going on in Italy. Obviously, they are completely different races. But, maybe not so much as you think.

Floyd was one drug test from winning the Tour de France. Do you think he would be racing Joe Martin if that had gone the other way? I think not. The Tour of Gila is just another stage race. That is until Lance decided to use it for training. Then it becomes world news.

I was glad to see that 3 guys out of the top 5 at the Giro prologue were riders that came from “my” background. By that I mean, riders I raced with or riders that competed in the US.

I’ve known Cadel since he was a junior. He raced MTB for years before switching to the road. Greg Henderson raced in the US on Healthnet for a long time. Plus, every year in New Zealand in the winter. And then there is Brent Bookwalter. I first saw him at a MTB race, Ore to Shore, in the UP of Michigan. Then he disappeared off my radar. I think he was in college and then went to Europe for the U23 MTB team. There he got transformed into a road rider. I’m not really sure if that is how it went, but he has a bright future ahead in road racing for sure.

Anyway, my point is that is doesn’t really matter where you start in this sport. And, other than the money and fame, it doesn’t matter where you are in this sport. It is all just bike racing. Look at Cyclingnews.com. There are 100’s of races going on all over the world during the Giro. The Giro just happens to be the one race that gets the most media attention. That in turn, attracts better riders. But, it doesn’t mean that the race you’re at isn’t important.

And, there is always the possibility that, eventually, you could be on the podium in a Grand Tour. Or that you might of won a Grand Tour, or been on the podium, and then be racing a local race in Arkansas or New Mexico. And that local race might be harder to win than a much more prestigious race somewhere else in the world.

When I ran this by Floyd, he started reciting the lyrics to the Talking Head song, Once In a Lifetime. “You may find yourself behind the wheel of a large automobile…You may ask yourself, well, how did I get here?” That seemed to sum it up pretty well. I guess if you look at what he’s been through the last few years, he obviously would get it. 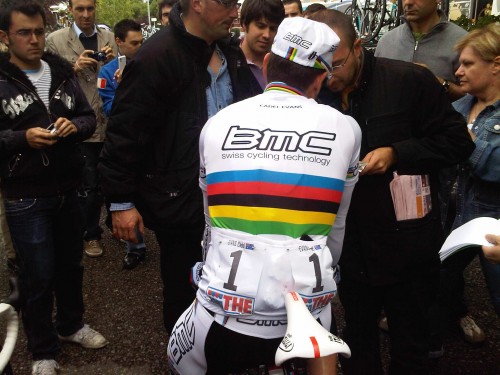 Cadel leaving the BMC bus at the start of the Giro Stage today. 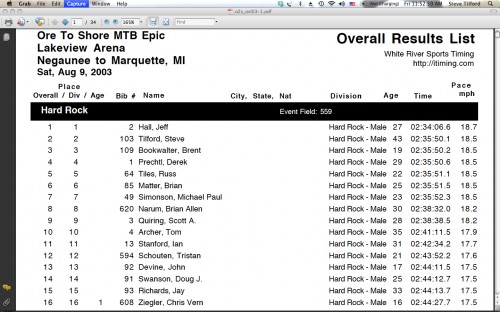 One thought on “It’s just another race…..”