Like I said below, I sucked. I knew I sucked. At least there were 55 guys behind me. Still, pitiful. But, I’m not riding that badly. At least I hope not. We’ll see in the next couple days I guess. Or maybe not. Kind of depends how the racing goes. Andrew Talansky went real fast. There is a pretty high chance that the race tomorrow might be interesting. I think that the Cal-Giant guys only have 5 guys on their team here. Including him. I’m pretty sure that isn’t enough to contain the field on this 110 mile stage tomorrow. It is only supposed to be in the upper 60’s, but the wind isn’t going to be calm. Maybe the 5 years of field sprinting on Dickson St. is over. Hopefully. The finish is pretty hard tomorrow. A left, right combination and then uphill for a km to the finish. There are usually pretty good time gaps inserted even though it’s a field sprint.

I got the video camera delivered to the hotel tonight. I’m charging it right now on my computer, but I’m not sure I’m going to have it figured out for the stage tomorrow. I couldn’t find a 16gb micrsd card that would do the whole 4 hours on HD. So, I’m going to use a 8gb card and turn it on and off. Hopefully by the criterium on Sunday I’ll have it figured out.

It’s good to see that Ben Day seems to have recovered nicely from his tapeworm experience. Finishing 2nd, it is a pretty good progression from his Gila ride. I guess we’re lucky it’s not next week already. If he improves the next three days as he has the last three days, it could be ugly by the weekend. 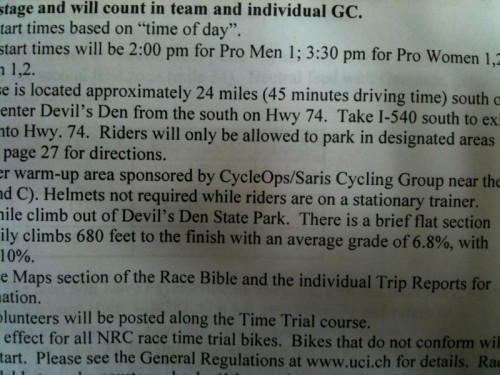 Check out the statement after C. in the race bible about not having to wear helmets while riding trainers. Wow - Brain surgery. 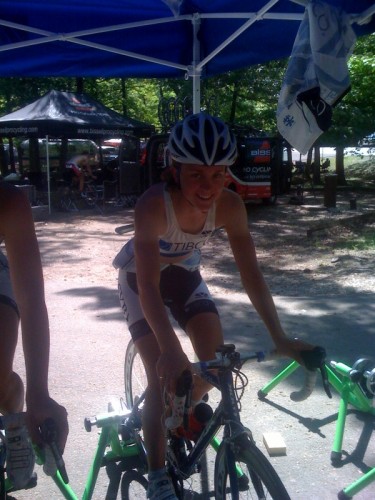 I told Amanda (Miller) this. She had her helmet hanging on her bars. She decided that maybe it would be better not to take any chances and put it on.

The photo below is of Jeff Bradley riding a trainer in Arkansas. I would have bet a million dollars that photo would never exist. 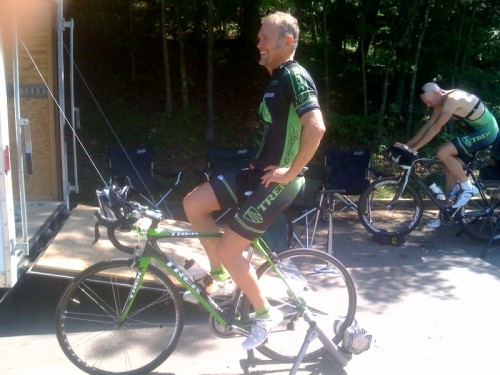 Here is Jeff on a trainer at nearly 90 degrees before the 1-2 race. Jeff came out of stage race retirement here at Joe Martin in 2010. The last stage race Jeff rode was the 1987 Tour de France. Pretty similar events.