Milano-San Remo is such a beautiful race to watch. 300 km mainly on the Italian coast. The scenery is awesome. But, after watching the finish on Saturday morning live, I was startled that my first reaction was “that’s it, it’s over?” The riders are on their bikes for nearly 7 hours and then it’s instantly done. Oscar Freire was whisked away to interviews and everyone else is ignored. It is not a glamorous sport when the conditions are harsh. Even when the conditions are perfect, it sometimes isn’t that glamorous. One guy wins and everyone packs it up for another day. But, in cycling, the other days come often. As soon as the next day. Sometimes you have to wait a year, but they come. Tom Boonen will get another shot at MSR.

KU was upset Saturday by UNI. The difference between cycling and basketball is that the finality of it seems more final. The team will not get another chance. KU basketball will get another chance, of course, but those individual players won’t. At least they won’t as a part of the same team make up. If your team isn’t the NCAA National Champion, then it lost a game in the tournament. And it is over for them. Forever. Even if they are just freshmen, that opportunity is gone. I feel bad for them, at such a young age, to experience such disappointment. The expectations are so high that it magnifies the disappointment.

Let’s all remember, if you are just a fan or actually competing, that sport is just sport. 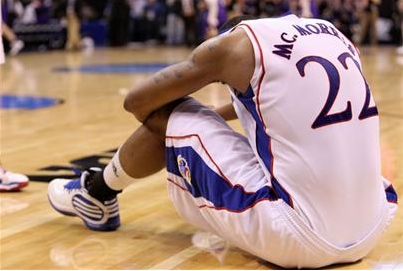