I’ve noticed that the officiating is done more and more by officials that have never raced bicycles. “In the old days”, most of the officials were bike racers themselves or had raced bicycles. Or, better yet, we had Event Services, where Brian Drebber and Gypsy (Fred Patton) pretty much ran the whole show. Now it seems there are professional officials, people who don’t even ride bicycles let alone race them. People making money on the weekends by officiating. With that said, you’d think officiating would become more professional then, too. But, it hasn’t. It kind of amazes me that at many NRC races, there are many officials at the event that make more money than the PRO rider that wins the race. That seems just wrong.

Anyway, I’m kind of tired of officials trying to enforce rules that don’t matter. A case in point is a situation that occurred last weekend in Arkansas. I had the unfortunate luck to be parked right next to the pre-race officials meeting. I overheard one of the officials talking about crinkled numbers to the promoter. Then, the other officials started talking about how to apply the $25 fine to the riders, etc. It was a big deal. They were trying to figure out the best way to police all the separate fields. The promoter told them that was between them and USAC.

I could not help myself and just had to interrupt and ask them exactly what it was they were talking about. I told them I had already crinkled my number and that I’d done it thousands of times. I couldn’t believe there was actually a rule against a crinkled number.

One official pulled out his rulebook and showed me the following rule, which he had already underlined and highlighted sometime earlier-

(b) Riders shall place their numbers as prescribed by the officials and in such a way that they are visible when the rider is in a racing position. When shoulder numbers are provided for cyclocross, they are worn on the upper arm to be visible from the front. Hip numbers shall be attached securely at least at the four corners with pins and no accessory or hair may obstruct a clear view of the number (riders with misplaced, obscured or unreadable numbers will not be placed). If shoulder or frame numbers are provided, they too shall be placed as prescribed. Numbers may not be folded, trimmed, crumpled, or otherwise defaced. [Replacement of the numbers at riders’ expense if noted before the start, otherwise warning or relegation.]

If that is what they are using for an explanation, it is just wrong. Maybe, in theory, I’ve raced more bicycle races than just about anyone around. At least, more bicycle races using the current/modern tyvek numbers. And almost for sure, I’ve raced more night time criteriums than just about anyone else alive. And, I can’t recall one time that my crumpled number had anything to do with me not being scored. It is just not an issue.

I hate subjective rules. I looked at Catherine’s number just after she had pinned it on. Then she went to the bathroom, peeled down her skinsuit and put it back on. The number was pretty crumpled. Crumpled enough that an official could call her on it.

Number pinning is a pain in the ass. Especially doing it yourself. Think of the normal Cat. 5 guy that pins his number. He pins his number on, most likely upside down, and then his kid crawls all over his jersey. Or, he is so nervous, he sticks the jersey back into his bag and gets a different jersey out and then remembers his number is pinned on the first jersey. By then, the number is illegal. It is nearly impossible not to have a crumpled number.

So, these officials are trying to enforce a rule that doesn’t have anything to do with what is actually going on in cycling. I don’t know how many riders went back into registration and got new numbers once the rumor got going that the officials were planning on fining riders $25 on the line. A lot. And they were making riders change their numbers on the line if they were crumpled.

We, as bike racers, don’t need the added nervousness/hassle before the start of a race. We create enough of that on our own. The sport is supposed to be fun for the weekend warriors. I can understand certain rules applying to the PRO-1 race only. But, this isn’t one of them.

The best official at a bike race is one that you don’t ever know was present. A race went perfectly if there was no interaction between the riders and the officials. Let’s try to make that a more commonplace occurrence. 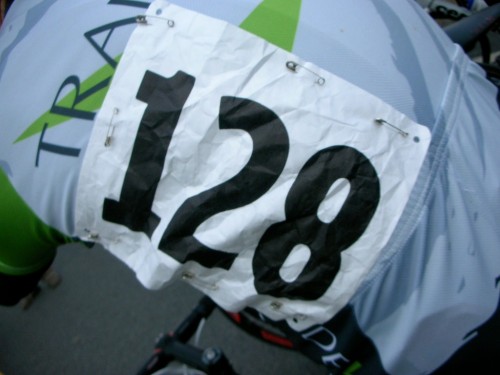