Well, that is over. I wasn’t really looking forward to racing 80+ miles in moderately cold weather. But, I needed to.

Hell’s Kitchen Road Race is 4 laps of a 20.3 mile course down in Hogeye, Arkansas (suburb of Fayetteville). It is adjacent to the Hogeye Circuit Race at the Joe Martin NRC. But, it is a much harder course than Joe Martin. There is only one climb, okay, one climb and another small one. But, the climb is pretty hard. Pretty steep. Long enough. I think around 40 guys started the Pro 1-2 race. Enough to make it frustrating and not enough to hide out in. It was in the lower 40’s at the start and didn’t warm up too much all day. Kind of windy, but that didn’t factor too much into the race.

3 of us from Tradewind Energy came down from Kansas. So, it was going to be impossible to control the race. The best defense is offense in that case. We cruised most of the first lap. The whole field stopped to relieve themselves pretty early. I overheard a few guys saying how cool it was and that they’ve “never done that before”. I was thinking, “wow”, I’ve stopped to pee during races hundreds of times. Anyway, nothing got going until the 2nd time up the climb at around 30 miles.

The climb is said to be 2 miles long, but I’d guess it is a little over half that long. It is only steep for a few hundred meters towards the top. Going over the top the 2nd lap, I put in a little test dig. 3 guys came with me, Joseph Schmalz, Mercy, Chris Uberti, Panther and Alex Battles-Wood, Team Hotel San Jose. I didn’t realize that over half the field had been shelled lower on the hill. So, 4 of us went over the top and thru the feed zone together. I was more interested in what was going on behind us. Brian Jensen (Tradewind teammate) jumped out of the field solo and caught on pretty quickly. That was good enough for us. So, we started working together and rotating pretty quickly. I thought we were going alright and distancing ourselves from the remaining field. About 10 miles later, I checked and there were 10 guys or so less than 30 seconds back. Bill was sitting on I presumed.

Bill made a super move on a small hill and bridged up to us solo. Brian punched it so hard that I was hurting pretty seriously. I assumed Bill nearly got dropped. But that was enough to destroy the mentality of anyone left chasing. There is nothing more demoralizing in bike racing than organizing a chase with the end result being the result that happened here. Now we had 3 out of 6 riders with 30 miles to go.

So, all of us keep rotating for the next hour. I thought it was great everyone was pulling hard. It’s early season and we all needed the training. I knew it would be best if our guys all stayed together over the climb until 6 miles to go. By then it was down to the 3 of us plus Joseph Schmalz and Chris Uberti. Alex Battles-Wood, didn’t make it up the climb with us the previous lap. Bill had been taking more than his share of the work and lost contact on the steep pitch towards the top. When he caught back on over the top he immediately attacked. Chris chased with Brian on him. Joseph chased them with me sitting on. When it came back together, I got away 5 miles out. It is mostly downhill to the finish. I didn’t have to ride very hard after I got away. I had a pretty big gap.

The finish was out in the boonies and was on a small hill. I was a little surprised when I looked back with 500 meters to go that Brian and Chris weren’t that far behind. They had nearly been out of sight a mile earlier, but I wasn’t pedaling too hard for the majority of that mile. Brian had been sitting on Chris and came around him to finish 2nd only a few seconds behind me. Brian said that Chris was going really good at the end. Joseph was alone in 4th and Bill finished 5th.

I felt pretty good at the end. It’s always nice to repeat win a race. And regional races where I’m kind of marked are never easy. But, with 3 out of 3 guys on our team in the break, it was pretty much a sure thing. I could of gone another lap or two if I had to. But, I didn’t really want to. That was plenty far for March.

On the way home, the AC compressor in my van seized up and we were mildly stranded for an hour. I had another serpentine belt, but the clutch pulley was red hot and not moving. I put the new belt on after it cooled and we limped home the last 100 miles. Upon stopping in my driveway, the 2nd belt melted through and broke. Car work time tomorrow I guess.

Somehow I got some stomach flu type thing last night and am still under the weather. I’m not sure if it was something I ate or just one of those things, but I’m not moving very fast today. Gonna go for a ride with the gang now. Daylight savings time and all. 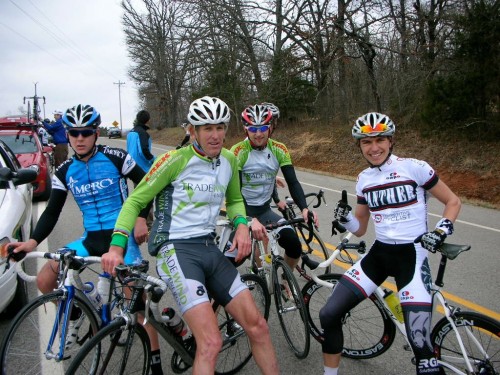 The break after the finish. Joseph, me, Brian, and Chris (Bill obscured).

Here’s a short video from youtube of the Cat. 3 finish and PRO 1-2 finish at Hell’s Kitchen. 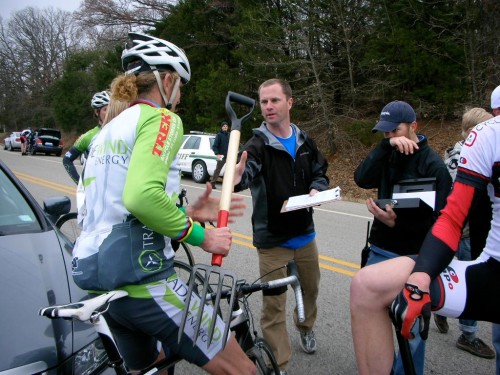 The race is super organized. We were nearly still on our bikes when they were giving out prizes. I love these Devil's pitchfork trophies. 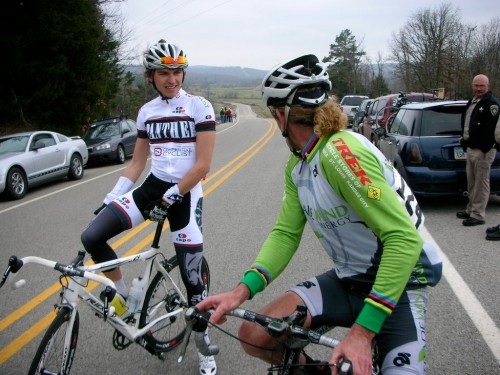