I just finished reading Joe Parkin’s book, A Dog in a Hat. I had been meaning to read it for a while now, but somehow never did. It was interesting to me because Joe and I have experienced many of the same things in bicycle racing.

I first met Joe in Belgium. I’m not sure what year. It must of been 1988. I rode many of the same races as Joe writes about in the book. I like that the most interesting things to Joe are observations that only he witnessed. That is a lot of what drives me in the sport. They might not have anything to do with the result. It is a oddity that catches one’s eye. New territory.

I rode the World Professional Road Championships in Ronse in 1988. I have no recollection of Joe Parkin in the race. (I agree with Joe that the crash at the end of that race was tragic. For both Steve Bauer and Claude Criquilion). I rode dozens of kermis races in Belgium. I don’t remember if Joe was ever in one that I rode.

I raced Philly when Joe was riding for Tulip when Zanoli won. I don’t remember Joe there.

Joe and I raced together on Bikes by Kyle in West Virginia thru Philadelphia one year. I didn’t know Joe too well before then. I knew that he loved setting tempo. Scott Monniger got into the leaders jersey and Coor’s Light was short on riders. Engleman had gotten sick and a couple other guys had quit. Len Pettyjohn came to us to “ask” for some help. I really didn’t have anything else going and didn’t mind being a mercenary. But, I wasn’t looking forward to the work. It was work. Joe on the other hand would have done it for free. He was itching to ride at the front in the wind all day. The excitement in his voice. I couldn’t comprehend it. But I appreciated it. To each his own.

I never experienced the drug aspect of the sport Joe writes about. Except from the “getting beaten up on end”. I was cognizant of it, but it wasn’t part of my bike racing sphere. I didn’t care. That was just the start of EPO era and the crazy oxygen enhancing drugs. Amphetamines didn’t make you twice are good. They might make you think your twice as good, I suppose, but it didn’t make a huge enough difference to make it fruitless for a guy like me.

Joe raced MTB internationally for a few years when I was on Specialized. But, his heart wasn’t into it. His heart was in racing on the road in Belgium and it is eloquently stated in this book. You should read it if you looking for a few small glimpses of the life experiences of a guy that lived the hard life.

Tonight was my last night in Austin for awhile. We went out to Chewy’s with Maureen. Chewy’s is one of Lance’s favorite restaurants in town, I guess. It is pretty good Mexican. Someplace you shouldn’t miss if you happen through. So, back to snowy Kansas tomorrow. It is nearly Spring, so it won’t be snowy too much longer. Just windy. 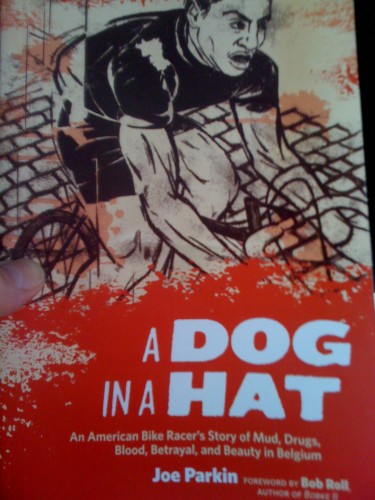 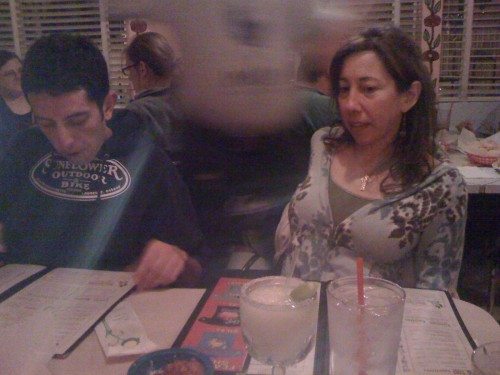 After camping out at her house for the better part of a month, Maureen still buys dinner. 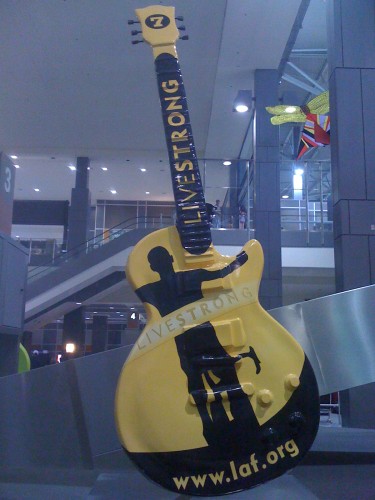 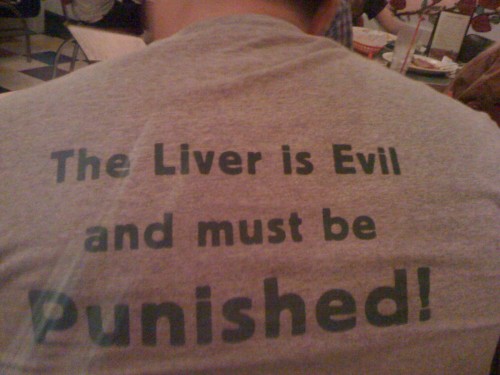 Back of a T-shirt of the guy sitting behind us at Chewey's.