It has been pretty cruddy weather here even though it hasn’t snowed in a week. The temperatures are never getting out of the 30’s and it is nearly 100% humidity, so it feels really cold. I have a hard time riding more than 2 hours when it is so wet. I’m getting wet from the spray off the roads and from sweating in thermal clothing. You can’t win. I’ve been pretty unmotivated. Yesterday, Bill and I went to a work gathering downtown for a group I had never heard of – The Topeka Community Area Cycle Project. They are a bunch trying to promote cycling in the Topeka area. Not racing, but commuting and recreation. They got a space donated. It is next to the Territorial State Capitol. The building is pretty old. Ornate. Tin ceiling etc. A building I can relate to. They were just doing general cleaning. They could use a guy like me, full time, to help them, construction-wise. I’m going to try to help out as much as I can, but it’s going to be a long process I think. It should be interesting.

I was driving by a blood bank today. I stopped and donated. I’m not sure why. I haven’t donated blood in a long time. I guess I didn’t have any reason not to was the reason. I figure it never hurts getting rid of some old blood to make room for some new. I can’t really see giving up any during the season, so I thought this was a good time. Maybe it was this Haiti thing in the back of my mind. I don’t know. The whole time I was giving blood, the lady that stuck me was preaching about how America needs to look after America and not after all these other people/countries. Exactly opposite of my views.

It is weird how many wealthy people seem to care so much more for poorer people only when the poor are down and out after they are walloped by a natural disaster. I raced the Tour of the Dominican Republic along time ago. Lots of good memories from that race. They are actually bad memories that my mind has twisted into good memories. It is funny how time does that. Anyway, the Dominican Republic is the rich side of the island and Haiti is the poor side. Let me tell you, Haiti has to be really, really poor if the Dominican Republic was the wealthy side. That island could have used our help for the last two decades. It takes a huge natural disaster for use to realize how jacked they are. It seems wrong.

I was walking by a liquor store today and saw the photo below in a display. I’m trying to figure how that is going to sell any more beer. The bike is a POS Mt. Bike. Not that Lance doesn’t ride MTB bikes, but that isn’t what he’s known for. Maybe there isn’t a shitty enough Trek for them to have on display at all liquor stores throughout the country. Lance’s name isn’t even on the display. I wonder if he’d be recognizable enough if they didn’t have a bike there too? It would just be a guy doing a weird pushup on a medicine ball. I never understood advertising. That’s kind of strange, since a lot of a cyclist money is derived from that very thing. 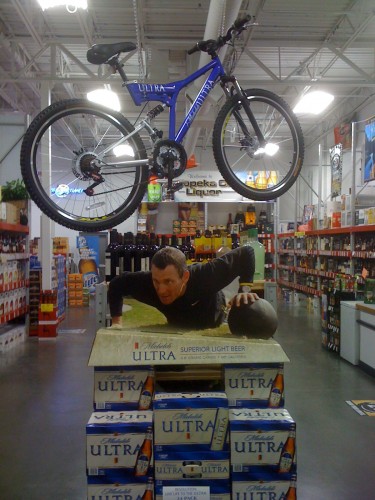 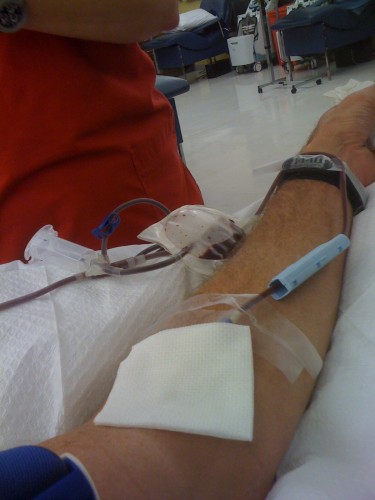 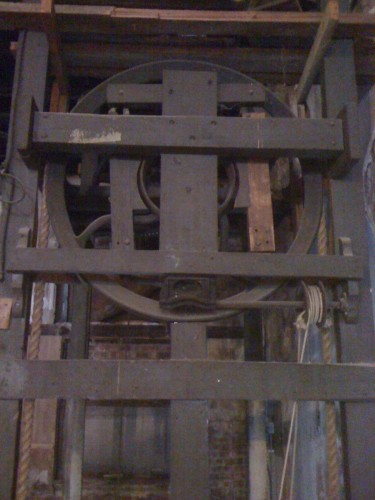 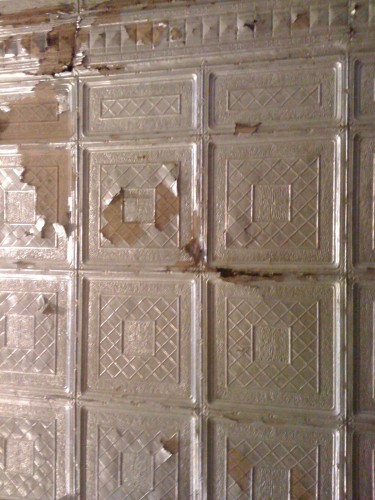