I woke up at 6am to 6 inches of new snow. If you are not familiar with nordic skiing, that isn’t good for the home team. The new snow crystals have sharp edges that really slow down the conditions. Plus, even if they groom the snow fast, it doesn’t have enough time to set up hard, so it is much harder. I didn’t really care. I didn’t even wax my skis. Actually, I don’t think I’ve ever waxed my new Salomon skis.

I know this is blasphemy to a real skier. I understand that having a bunch of wax on skis is important. My problem is that I’ve had the pleasure to ski on really good skis that have been waxed 100’s of times. And those skis are dramatically faster than any skis I’ve ever owned, or ever will own, unless of course, I get some of the used race skis from these guys. It’s just training, so I don’t really care. It’s like riding ‘cross tires on the road. Not a big deal. But, if I’m going to race, I’m just going to go to some of the guys I know up here and get their 3rd fastest skis! Those skis will be 30 seconds a km faster than anything I can do to my skis.

So, 40 or so of us showed up at the Fish Hatchery for a 8 am start. The ski is from Hayward up to the Telemark resort. Eat lunch and then ski back. A little of 90 kilometers total. The only time restraint is daylight. It gets pretty dark by 5 pm. The trail was really soft and not groomed for the first couple km. Then we ran into Chris Campbell on the big groomer and it was much better. Most of the guys have stashed clothing at OO (halfway) and dry clothes at Telemark. I do it self contained. Just some money for lunch. I don’t carry water. I hate having a water bottle in my pocket riding bikes. It is just as bad skiing.

Anyway, nothing special to report the whole day other than I fell about a 1/4 the way up and hurt my back pretty good. I was putting my iPhone back in my pocket on a fast downhill after I had taken some photos and right when I got it into my pocket my skis came out from under me. I landed flat on my back with my phone not laying flat, but perpendicular. By that I mean the narrow side jammed into my lower back when I hit the ground. It totally racked my back. And my thumb. I got up pretty quickly and tried to catch up. The rest of the day, which was 5 more hours of skiing, I was completely seized up. I ate a huge handful of anti-inflammatory pills at lunch. It did nothing but burn a huge whole in my gut. I skied virtually the whole way poling only on my left side. That was when I was poling. I tried to use my poles as little as possible. Whatever. I was kind of worried that I was going to screw up my back long term, but it seems like only muscle injuries, so I’m not stressed.

The best fun of the whole day was a little competition I had going with Lynn Cecil (previous Birkie women’s winner). She started trash talking the night before at dinner. It started again in the morning. But, she chickened out and used her classic skis at the start. But, that was a very bad choice. She had skate skis at OO. On the way back everyone was pretty much on their own. I was skiing with most of the cyclists on the way back. Catherine had started at the North end and was skiing back down. She didn’t want to stop at OO and get all cold and sweaty. My back was tweaked enough that the speed Catherine was going was pretty good for me. About 5km from the end there is a big hill appropriately named Bitch Hill. During the Birkie, there are some dressed up “bitches” at the top. Exaggerated makeup and huge breasts. But, most people aren’t looking up to enjoy the theatrics.

Anyway, I was about half way up Bitch Hill and Tom Schuler shouted to us. Drew Holbrook, Lynn and the gang were there. I was nursing Catherine along, She was pretty much out of juice. When your form leaves you skiing, it isn’t pretty. When our pitiful form leaves us it is out right ugly. I figured we had about a minute lead with 4 km to go. We got over the top and got going pretty good. Catherine is always up for a challenge and got a 2nd wind. She started skiing faster than she had all day.

Drew made a huge effort, but came up short. We cruised into the warming hut victorious. At the Sawmill afterwards, Lynn asked why we didn’t wait up and ski together. She acted like she had forgotten all the, now hollow, challenges. She knew. She was done.

My back is completely seized now. I can’t move. Today is a down day, except for some snow shoeing. The snow is fresh and deep so it is going to take a concerted effort by the group to get a trail constructed. Hopefully, a ton of skiing the next week is in order. My choice of ski is Cable to Hayward. 40km point to point. I’m not much into the out and back thing in cycling or skiing. Plus, it’s always nice to get into the “city” pretty often. 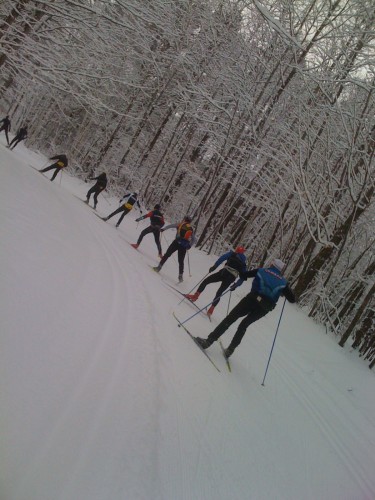 Skiing really is a beautiful motion and the scenery is always great. 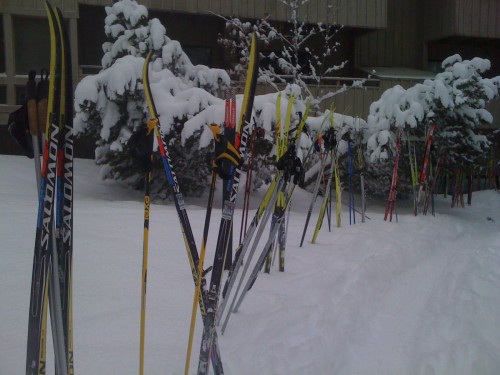 I knew it was going to be a long wait to order lunch when all these skis were at Telemark. Many took the big short cut obviously. 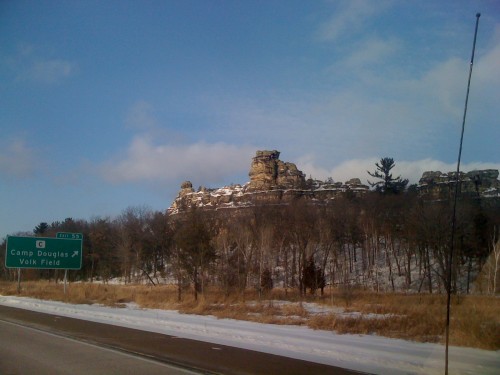 This is my favorite part of the drive from Chicago to Cable, the Wisconsin Dells. Great scenery, ugly human contribution.