First, I need to state that I despise riding indoors. I avoid it at nearly any cost. That being stated, I have ridden indoors a couple times this year. Back when I was roofing. No light available and no energy to get bundled up. Riding indoors isn’t the same as riding outside. Not even close. I ride the ergometer because I can stand and ride off my seat some to train. This makes it closer to riding outside. I hate watching people lock their gazillion dollar carbon frames into a stationary trainer. Sometimes all winter. Sometimes just warming up for a race. This is not good for your race bike. If you feel the need for this, go out and get a cheap aluminum or steel frame and use it for this purpose.

I have tried about every indoor trainer available on the market. When I was an intermediate (young junior) I started out on rollers. I didn’t have the money for Al Kreitler rollers, even though they were made in Kansas, so I had some Italian brand. I raced roller races every winter for years. From there it was a “squirrel cage trainer”. Nothing good there. When I rode for Schwinn they gave me a Velodyne. It was the first trainer that electronically controlled the resistance. You could put different chips into it to ride different race courses. I sold it to Andy Hampsten for a grand or so. He took it to Europe I think. I had ridden it maybe 4 times. I figured at that rate, I could buy 4 plane tickets to San Diego and train at 75 degrees. During this time, I bought a Tunturi erogometer. Even with everything new out there, I still ride the 25+ year old Tunturi ergometer. I got it at the bike show in the 80’s when Interbike was still in Long Beach. At the time, it was the cheap version of a Monark ergometer. We rode the Monark ergometers at the Olympic Training Center mainly because of Eddie B. Notice, because. Everyone hated ergometer tests. But, Eddie put a huge emphasis on them. One winter he picked a trip to South America exclusively from the results of riding indoors. I eventually became a expert at the tests (and fooling them).

I became an ergometer expert mainly because I spent a whole winter in Grand Forks, North Dakota, at the Human Nutrition Lab. The weather dictated that I ride indoors from November on. Plus, I was doing max and sub maximal VO2 tests weekly. That was over 32 V02 tests, plus all the training. Sometimes 2 or 3 times a day. Can you imagine, riding indoors 3 different times in one day. I must of been crazy.

When I got to the lab, I rode up to 5kp on the V02 test. The Sports Medicine DR. there, Hank, was kind of an ass. Maybe not really an ass, but a know it all about sports science, or so he believed. He would update me on my respiratory quotient and other important numbers in the middle of the test. Vocally predicting when I was going to fatigue. I hated it and decided to prove him wrong.

Riding a max V02 test is very hard mentally. There is no end. Except when you are done. It would be like climbing a hill that gets steeper and steeper and has no top. And, you know there isn’t a top. Anyway, I decided that I was going to ride 30 seconds further every week. That was going to be my ending point. When I did the test, I knew where the “finish” was. So, by the end of the 3 month period I rode nearly 6 minutes longer for the V02 max test than I did when I first arrived. Plus, the resistance was increased every 2 minutes, so I rode all the way thru 7kp, the hardest resistance on the Monark ergometer. It was an enormous amount of power difference.

I did this to prove Hank wrong. The last week in the lab, when I was doing my last test, I asked Hank why I had improved so dramatically on the V02 test. I thought I had him, but no. He already had an answer. It was because my fitness had improved. I didn’t even try to argue. I had flown directly to Grand Forks, N.D. from a stage race in Arkansas. Before that was the Coor’s Classic in Colorado ( nearly 2 weeks long). I was much fitter for bicycle riding when I arrived in September than at Christmas. I hadn’t ridden outside more than a handful of times in two months. But, I was an expert at suffering at ergometer testing. I realized after the process was over was that I had no idea how far or hard I could go riding indoors. It wasn’t the same as suffering outside. So many different feeling to overcome. It took months of riding indoors, day after day to become familiar with the sensations. I had made the mistake early on to try to compare my sensations of riding outside to riding inside. It is a completely different beast.

The day after Christmas I flew to the USOTC (United States Olympic Training Center) to start the season. The time in the lab had finally paid off. The first thing we did was ergometer testing. I aced the test. I had the highest power to weight ratio of any rider there. By far. This got me onto Eddie’s radar screen. It might have been part of the reason I made the spring trip to Europe on the National Team that year. I never have thought of that. But, to this day, I still believe that riding indoors should be considered cross-training and not bike riding. Sorry if you disagree. 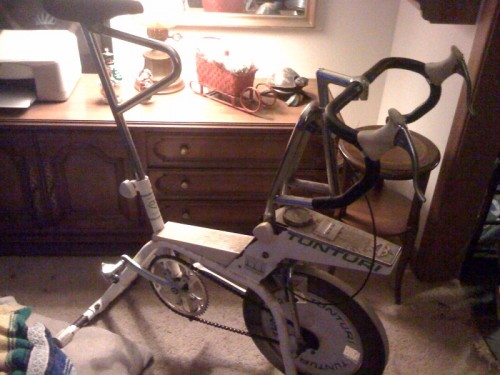