And it was. Actually, to be honest, now two days later, it could have been more epic. But, the course could hold an enormous amount of water, so there wasn’t a ton of walking, etc.

This race is what MTB racing is all about. Riding singletrack in the middle of nowhere. Alone. It is 56+miles. With around 40 miles of that true singletrack. More than that. Technical, fun, absorbing singletrack. The Ozarks of southern Missouri aren’t as massive as Arkansas, but it is definitely hilly. Always. I don’t know how much climbing there is in the event, but it’s lots.

The race caught my eye last year because of the prize money. I entered, but was sick and didn’t go. I did follow the results. Chris Plogh won and Brad Huff was second. Brad flatted 3 times or so. He’d just finished a long stage race in China or somewhere, so he had an enormous amount of form. I was itching to see what it was like.

The race starts in a super nice camp site, canoe rental resort named Bass’ River Resort. It climbs out on a gravel road for the first 3 miles. From then, it’s technical singletrack for hours. There is a 5 mile gravel road “rest” in the middle and then back to singletrack until the last 6 miles of road that takes you back to the resort.

It had rained so much, the streams and rivers were all flooded. That made it a problem just 1/4 mile into the race. Over waist deep water. Scott and Ryan, race directors extraordinaire, came up with a solution. They hauled a 5th wheel flat bed trailer into the stream and then piled some wood pallets to step off. And this was nothing compared to the rest of the day. Just a distant memory. I have so many memories from this event, I can’t even start to tell you them all. It seemed all a blur sometimes during the race, but now it is starting to come back in bits and pieces.

Here’s how it went from my perspective. I hit the trailer in the lead. No problems here. Immediately it starts up a good gravel climb. It got down to 5 of us on the climb. Bill was there. Also, Eric Pirtle from St. Louis. He is a Giant Bicycle rep now, but is a very good MTB racer and rides on the road as well. He was riding a full suspension bike with 5 inches of travel front and back. And he knows these trails well. Shows you how rough they are.

Eric and I did a little sprint for the first Berryman singletrack. He led and I was 2nd. He was going a pretty comfortable pace. Actually, really comfortable. Easy up the climbs and then bombing the descents. I was definitely not handling my bike very well the first 2 hours. Not going down or up. There are 4 check points on the course where you have to pick up colored zip ties. Right before the first check point there is a pretty technical descent. Eric was bombing the descent and got a small gap on me. Coming around a sharp corner, I heard him fall, but wasn’t looking up to see what happened. He was laying off the side of the trail and said that he thought he broke his back. I knew there was a photographer a couple hundred meters back, but then looked down and saw that the road was below. Ryan was down at the bridge and we told him about Eric. It took them an hour to get him out. (He had a bad concussion and severely bruised about everything connected to his waist, but he’s going to be okay.)

Coming out of the camp it comes onto a road. This was the only complaint of the day. There wasn’t any course marking there. I rode the wrong way for awhile, then turned around. Finally, Dwayne Goscinski, Gary Fisher 29er Crew, came and led me back to the singletrack. He told me it climbed for a while and to go on. I started out riding pretty conservative. Not far into this trail, I had my first of many flats. I hit a stone climbing and latex was spraying out of the top of my rear tire. I had a ton of corn meal, etc. in the latex and shook it for a bit and it sealed. I put more air in and got going. Not more than a mile later it went flat for good.

So, long story short, I had a horrible repair. I couldn’t get the washer off the valve stem, so I couldn’t remove the valve stem to put in a tube. It took forever. 7 or 8 guys passed me by the time I got the air in. I caught Bill pretty quick, but he was going bad. I wasn’t going good at this point either. I got to the 22 mile check point and I was 5:30 minutes back in 3rd. That seemed okay to me. The next loop was 16 miles and back to the same check point. I got going better good here, but pinched the rear tire again. This was a pretty quick change other that trying to find all the stuff in my muddy pockets. No one passed me. When I got back to Trudi at the checkpoint, I was nearly 7 minutes back. I thought, “shit, 7 minutes in 19 miles. That’s not happening.”

But, I finally got going. Really going. I had been really mediocre the whole time up until then. But, descending out of the Berryman Campsite, I felt good. I was riding my big ring exclusively. It is so cool having power on singletrack. You float over all the rocks that seem so menacing at a slower pace. I caught Dwayne again and he told me the leader was 3 minutes up. I didn’t believe him. That was impossible. I’d only gone 3 miles. But, a couple miles later, Ryan, the promoter, was on a road and said that I was less than a minute back. I knew then I was going to catch back up. So, 7 or 8 miles out, there was the last mucky section. Deep, new cut trail. Muddy. And he was there going nowhere. I thought, “man, did I get lucky here.” And then, pisssssss, another rear flat. I was going 5 mph in 6 inch mud. Crazy. I just laughed.

This repair wasn’t horrible either. Other than trying to figure out what CO2 cartridge had air. I got it on the 3rd try BTW. Then it took forever to stick all the used tubes and shit back in my pockets. Dwayne had passed me again, but I caught him pretty quickly once when I got going. From here it was just 6 miles back on gravel. One river/stream crossing left. I was riding pretty good for the first couple miles and then started feeling weird. Bonky. I thought, man, it’s only 15 minutes back to the finish, just ride. But, no. I was going downhill quick. At this point I thought that I had no chance of catching the leader. But, I had two baby Snicker’s bars in my pocket that I wanted badly. The problem was that I had so much stuff with flat tubes, etc. in pockets and my hands were so muddy, that I was having a hard time locating them. Finally, success.

There were a couple small climbs on the road and I couldn’t see anyone in front or behind me. Coming down into the river, the flatbed was gone. I was scoping out a way across and on the other side I thought I saw a guy in a yellow jersey. I thought, “the leader is wearing a yellow jersey.” So, I hit the water fast. Jumped off. It was mid thigh. When I got to the other side, it is river rock for 50 meters or so. No one was there. I thought it was just a spectator. I got onto the paved road, 500 meters from the finish and there is a small hill. There he was, 100 meters ahead, going really slow. I shifted into my 11 and started sprinting. I was coming at him fast. He looked back right before the top. That was very, very good for him. He saw me and took off. He crested the hill with 30 meters or so on me and it was just a short downhill to the finish.

So, I ended up 2nd. Somewhere between 3 and 13 seconds back. The guy that won was Jon Schotter from Columbia. We both beat the course record by 3 minutes. 4:39:34. Under extremely worse conditions. He got an extra $400 for that. Jon said he completely blew. That is an probably an understatement. Sometime there he stopped and filled a bottle in the running water. Pretty desperate. I took something like 10 minutes out of him in the last 19 miles. I can think of 500 times during the race I could have saved that time. Just trying to stick those Snickers wrappers back in my pocket 2 miles out was the difference. But, it doesn’t matter. He won. I’m sure he had a bunch of things going too. I’ve never had so many times during one race of nearly coming back and then not. The finish was perfect. Better than perfect. He rode a great race and it would of been a shame if I would have passed him in the last 100 meters.

My riding time on my odometer was 4:25:50. That means I was not moving for around 14 minutes. Not surprising to me. I couldn’t have been worse changing tubes. At least the first one. Bill ended up coming back at the end and finished a respectable 6th. Pretty good $$$. Catherine Walberg ended up winning the women’s race by nearly a half hour. The amazing thing is that she lost nearly 45 minutes to the leading man in the first 38 miles and ended up losing on 5 minutes in the last 19 miles. I guess she didn’t slow down. She was pretty timid on the descents the two days prior, so I think she finally got comfortable letting it go. That speeds everything up obviously.

My overall experience from the weekend was great. I’d never raced a MTB that long. I’d do it again in a second. The day was nuts. I went from comfortably winning, to losing by a mile, to almost winning again, to losing and then losing by a smidgen. It was pretty great. I had forgotten how much I like to go fast on gnarly rock. It is amazing that the bikes can even function under those conditions. And it was a pleasure to run into some new people. Mainly, Scott and Ryan. They have so much enthusiasm for the area and the sport in general, it is super contagious. It is a completely difference environment from the road. It was raining at the finish when they were handing out the checks. No one was in a rush. They had a full trailer of Mueller Beer flowing. I don’t have any regrets at all. It was a new life experience. Isn’t that what you’re trying to do in life. I’ll be back next year a little better prepared. How about you Brad Huff? 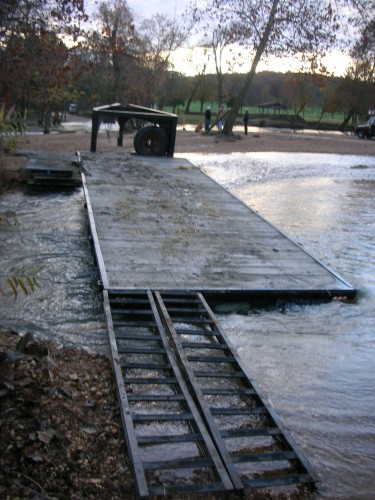 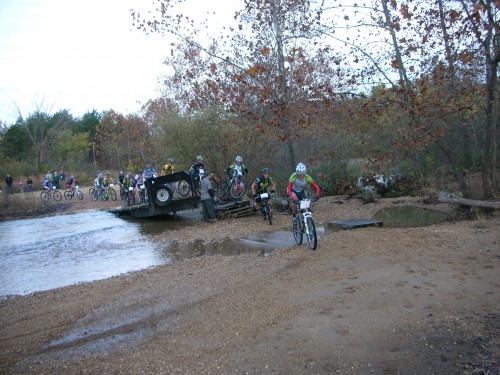 First off the pallets to the river rock. 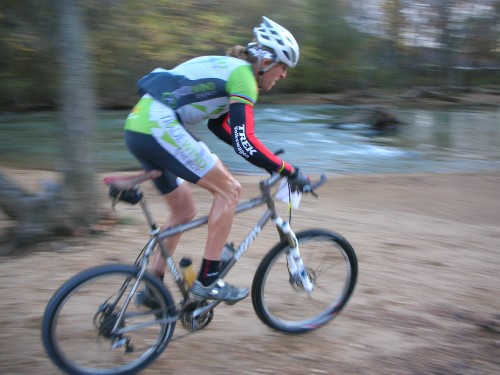 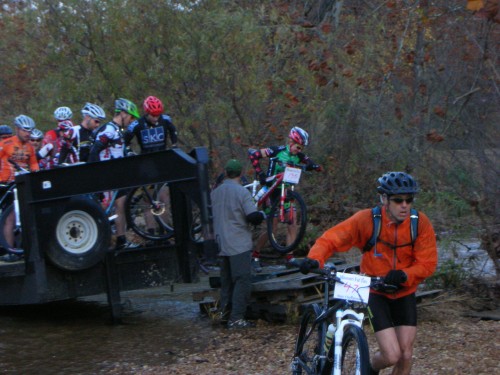 Catherine coming off the trailer. 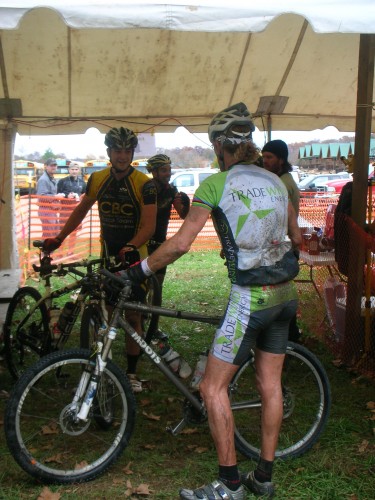 At the finish in the tent talking to a little shell shocked Jon Schottler. 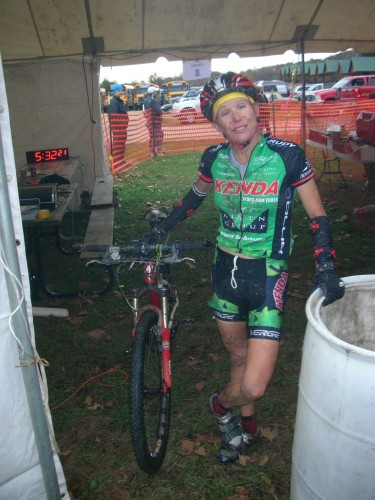 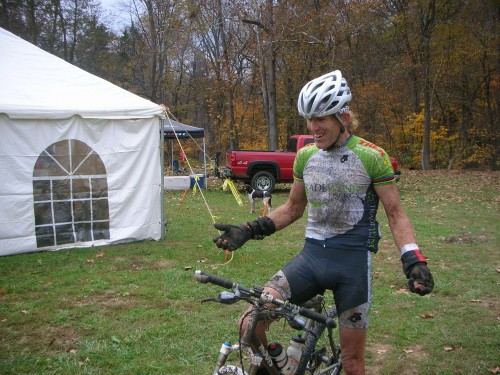 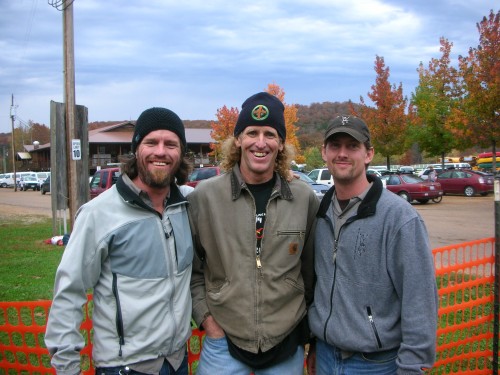 Scott, me and Ryan after the awards. Pretty good guys.

5 thoughts on “BTEPIC – That stands for Berryman Trail EPIC”