Today was awesome. I am rarely stunned from scenery, but this is one of those rare cases. I spend most of the day on my bike, climbing the Haleakala Volcano. The top 4000 ft. is a National Park. The lower sections is privately held, with homes, sugar cane fields, etc. I met Donnie Arnoult and his crew at Maui Cyclery. They were leading a private tour up the climb. He supplies the bikes, the sag vehicle (only up to the park entrance at 6500 ft.) and anything else that someone might need to get up to the top of this crazy long climb. 36 miles. 10023 feet elevation change. That works out to be about 5.3 % grade the whole way. But, some of it is nearly flat, so that means there are some pretty steep pitches.

Ryder Hesjedal has the unofficial/unofficial record taken from Jonathan Vaughters of 2:32:51. Here’s a link to the garmin site with the statistics.

Anyway, the day had to be among the top ten rides I’ve ever done. There is really only up to go. Up and up. For a long time. It is amazing the different weather patterns and temperatures that occur. I was told at the start to expect about a 3 degree drop in temperature every 1000ft. I knew that in the back of my head, but didn’t really expect it for some reason. Donnie has done the climb over 300 times. I figure that is nearly 600 miles vertical. 600 miles up. That is into outer space. I wonder who on the planet has the record for the most lifetime, vertical climbing on a bike and how much?

It got pretty breezy the last hour or so. We’d shelled everyone else. I wasn’t sure that was the best thing for a ride leader to be doing, but he seemed okay with it. And as it turned out, it was fine.

Anyway, it was dry at the top. Out of the 300 times Donnie has been to the top, he said the weather was in the top 5 of being the best. It was great, I guess. Cold and windy, but dry. There is an observatory at the top. A big crater/depression that the New York City can fit in on the other side. And you can see forever if there aren’t any clouds in the way.

Only one paying client made it to the top that day. Two ride leaders. And me and Trudi. She had started just to go for a ride, but I knew that she wasn’t going to turn around once she started up. And she didn’t.

It got pretty cold after a while up there. I took a few photos and headed down. I was wondering what it was going to be like descending for over an hour. The road is near perfect. Smooth asphalt. Banked switchbacks. Perfect. I thought I was going to have to wait up for Donnie. Little did I know. The guy knows the descent like the back of his hand. And can descend like a banshee.

I can normally descend with about anyone on a road bike, but I had a little issue with speed wobble about 3 miles down. I haven’t experienced speed wobble on a bike in a very long time. I didn’t bring my own bike to Hawaii, but was riding a very good “borrowed” bike. At first I thought that my steering column had broken. Or my frame. But, when I pulled my brakes and the wobble got much more extreme, I knew the problem. I stopped anyway and checked the bike over. From then on, I wasn’t that confident in my equipment. I don’t even know what causes speed wobble. Frame geometry? Fork rake? Whatever. But, it scared the shit out of me for a few seconds. That being said, it was still a blast. More than a blast. Coasting 50 + mph for long stretches and then flying around banked switchbacks and accelerating by up to 50 in a matter of seconds. For an hour.

We got back down to the 85 degree normal temperatures. It was nice to be warm again. If you ever have a chance to come to Maui, you should make it a priority to ride up and down this thing. It is something you won’t forget. 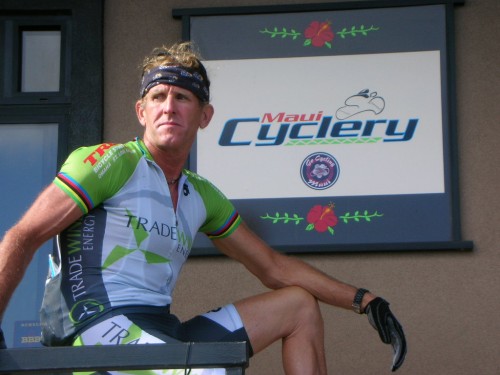 Start at the shop. 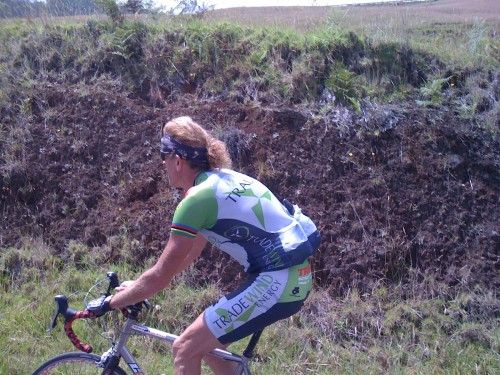 Climbing at the start when there was still vegetation. 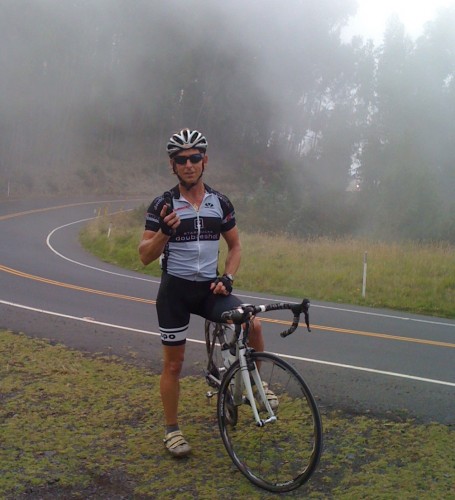 Donnie was only on his phone about half the day. 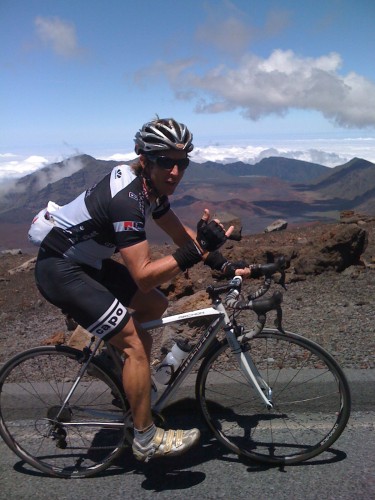 Andy Hampsten calls Donnie Arnoult the Mayor of Maui. I'd say the King of Haleakala would be more appropriate. 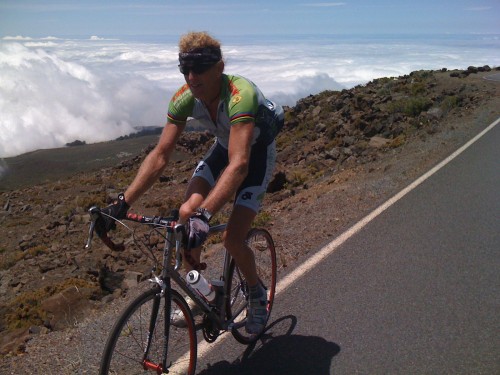 Climbing above the clouds. 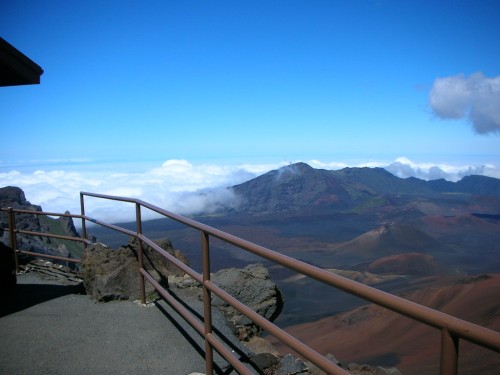 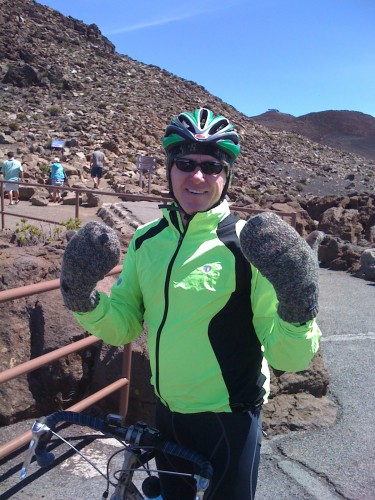 Dressed for riding in Hawaii in July!