I’ve been racing bikes for a long time and rarely have I been more surprised about my performance than this past weekend.  I have been riding pretty well.  No complaints.  Friday night I just plain melted.  Saturday was a little cooler, so I had some hope.  Then, it started raining mid-race.  I thought, perfect.  Cooler.  Rain.  I’m good.  Nothing was further from the truth.  I suffered more than the day before.  If it wasn’t for the corners where I was gaining a lot,  I would have been shelled.  Chris Hall rode a great race and lapped the field with 3 others.  But, it wasn’t to be.  Scott Monninger got into the field with two corners to go and came by on Dan Schamtz’s wheel to win.  Chris was 2nd and Jeff Hartman third.

Sunday it was only in the upper 80’s and less humid.  The course was barely a minute around.  Half up and half down.  Three of the corners were tricky.  Fun course.  Good race.    I had little motivation.  I felt spent from the previous two days.  It is weird.  Doesn’t it seem that when you are winning races and putting out a ton of energy, the sport should be painful?  And, when you’re riding bad and not winning, it would be less painful.  But, it is exactly the opposite.   It just doesn’t seem right.

Things got going quickly.  The overall was pretty much done.  Scott had won.  Our team plan was to win the race and try to move Chris Hall up to 2nd in GC.  Brian attacked a couple times and won a prime.  I won the next one.  I was mildly surprised again that I wasn’t as bad as I had anticipated.  Eventually, a fairly big group of 9 was away.  Brian had missed the move and was chasing alone.  We waited a couple of laps and he got on.  We went around and lapped the field pretty quickly, it being only a minute a lap.  Then it got pretty mixed up.  Lots of attacks.  It was a little hard keeping track of who was where.  Eventually, Chris Hall, Matt Ankeney and Jeff Hartman got away and were coming around again.  Matt jumped into the field first with just a little over a lap to go.  Chris and Jeff got into the field a bit later.  We kind of screwed up and didn’t get Chris up to the front in time to catch Matt.  Chris finished 2nd and 2nd overall.  They had pretty cool chip timing at all three races.  Chris rode the fastest lap of the race, by any rider, on the final lap and only lost by a couple bike lengths.  That was impressive. The rest of the team has to take responsibility for him not winning.  He rode great.

I have to say that no matter how much I was suffering, the Tour of Kansas City was a great weekend.  All three courses were excellent.  All had verticle gain and technical corners.  Just what a good criterium demands.  The results were out nearly as we were crossing the line.  As a rider, you can’t ask for much more.  After the race,  we went to eat at the Flying Sauer.  I saw it on Stefan Roth’s website.  The largest beer selection of anywhere I’ve ever been in the world.  Unbelievable.

So now, I’m trying to decide if I’m sick or just have really bad allergies.  I was riding much better on Sunday.  So, I have that narrowed down to either the humidity or the heat.  I need to do a couple more race day experiments to narrow that down to one.  But, this was my first race weekend in hot humid conditions the whole season, so hopefully next time, I won’t have the adverse reactions.   It’s only 3 days until the Tour of Lawrence.  You can still enter.  It should be an awesome weekend. 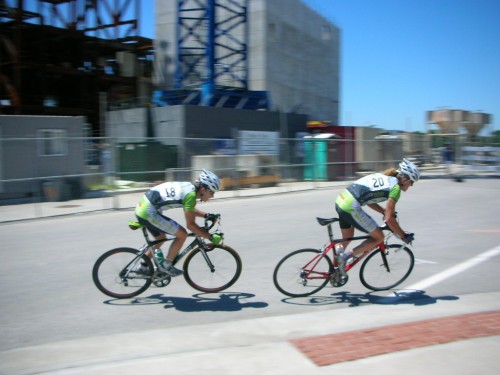 Attacking or getting dropped? 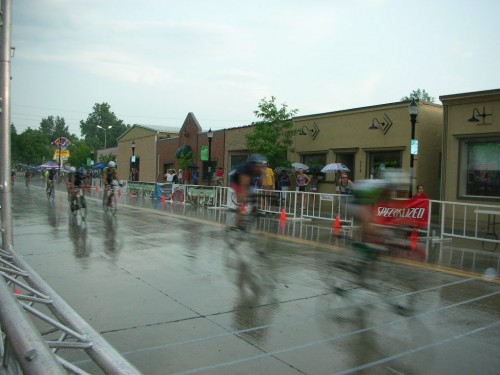 Barely a blurr in the rain. I felt like the picture. 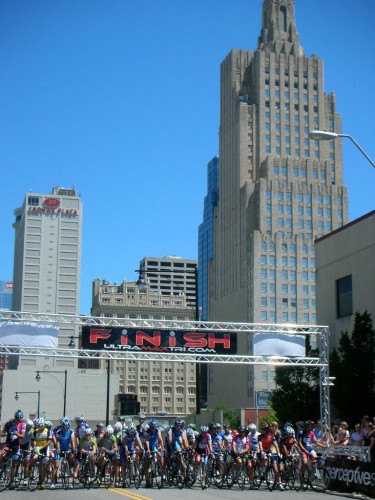 Dramatic backdrop on Sunday at the Power & Light Distric in KC. 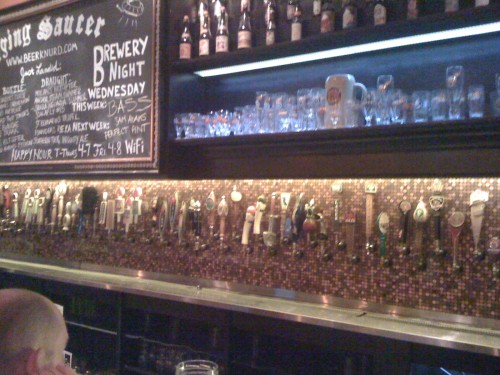 The Flying Sauer. 50 beers on taps. Hundreds more in the bottle.