Drove the million miles up to Davisburg,Michigan for the first cross races of the season. It is always a reality check. Cyclo-X is really a hard sport. Especially the first couple. Jeff and Robert, the promoters for these UCI races have promoting down. They treat the riders super nice and everything is perfect from registration to course prep.

This is a two day race. There were only around 40 guys in each race, but a fair amount of pretty good riders. Johnathan Page. A trio of Swiss guys. Canadian National Cross Champion, etc.

I was supposed to be on all new equipment, but it was not to be. I ended up putting my Eriksen back together again on Thursday. It’s a perfect cyclo-x bike, so I have no complaints. I only brought one bike because I’m flying to Las Vegas today and have my road bike there already.

But, I did have some problem equipmentwise. Saturday I was having problems with my chain staying on. It came off double digit times. Last season, same setup it never came off once. Go figure.

It was really hot, mid 80’s. I got a good start and was in a small group of 3. On the 2nd lap, my chain popped off for the first time. Page attacked. I got frustrated. Whatever. I ended up 6th. I was mildly lucky getting that place. I took myself out of the mix fumbling around with my bike. I should of been in the hunt for 3rd. Page won easily. He was in a league of his own. Then Swiss guy. Canadian.

Sunday, it was much cooler. Lower 70’s. Much more enjoyable. I got a good start again. Page got away on the first lap. I’d put on a front derailluer and shortened my chain a link. I was riding in a group that was going for 3-6th. I washed out my rear wheel on a off camber section and was separated from a group of 3. Then I noticed my rear tire was low. I rode nearly a lap on virtually no pressure. I hadn’t put my wheels into the pit, so didn’t know where they were. Dumb mistake. Anyway, I got to the pit, found my wheels after a while and got going sans rear brake. My spare wheels didn’t have the same width rim was my race wheels. Dumb mistake two. I took me awhile to figure out have to ride the course with only a front brake. I’d already been passed by one guy and was caught by the group going for 8th through 10th. I though, “shit, I’m going to get only 1 measly UCI point.” Anyway, I got going prettty good on the last two laps, dropped the group and caught back up to the guy that passed me when I was in the pit. So, I had to sprint. I totally smeared the guy by about 3 inches. Maybe less. 6th again. Pretty lucky again I guess.

Catherine Walberg, who is riding for Trek now with a few other midwest ringers, got 3rd both days. Something like 24 UCI points. Pretty good. She wasn’t near her best, so that is a encouraging sign for the rest of the season.

So, I can’t complain too much. I was riding alright. I’m at Midway airport waiting to fly to Las Vegas. Racing the Vegas Cross Wednesday night, USA Criterium Finals Thursday night, then fly back to the Midwest for the UCI Cross races in Madison this weekend. That is 6 races in 9 days. With 5 being cyclo-x races. Right. Doesn’t sound that smart to me either. Guess you don’t know until you do it.

Jonathan Page and I at a Q & A thing at the Kinetics Bicycle Shop after Saturdays race. Pretty relaxed. 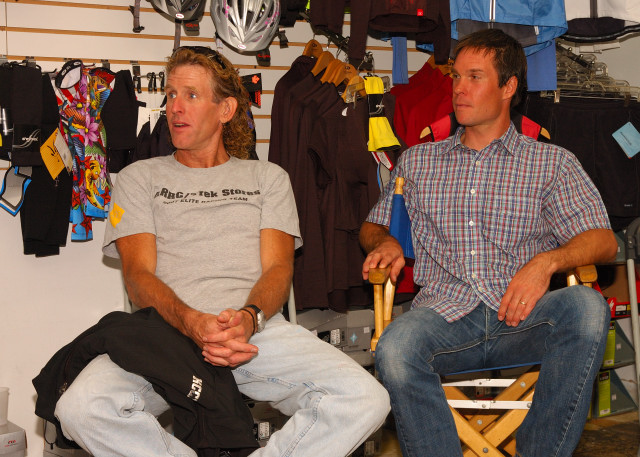 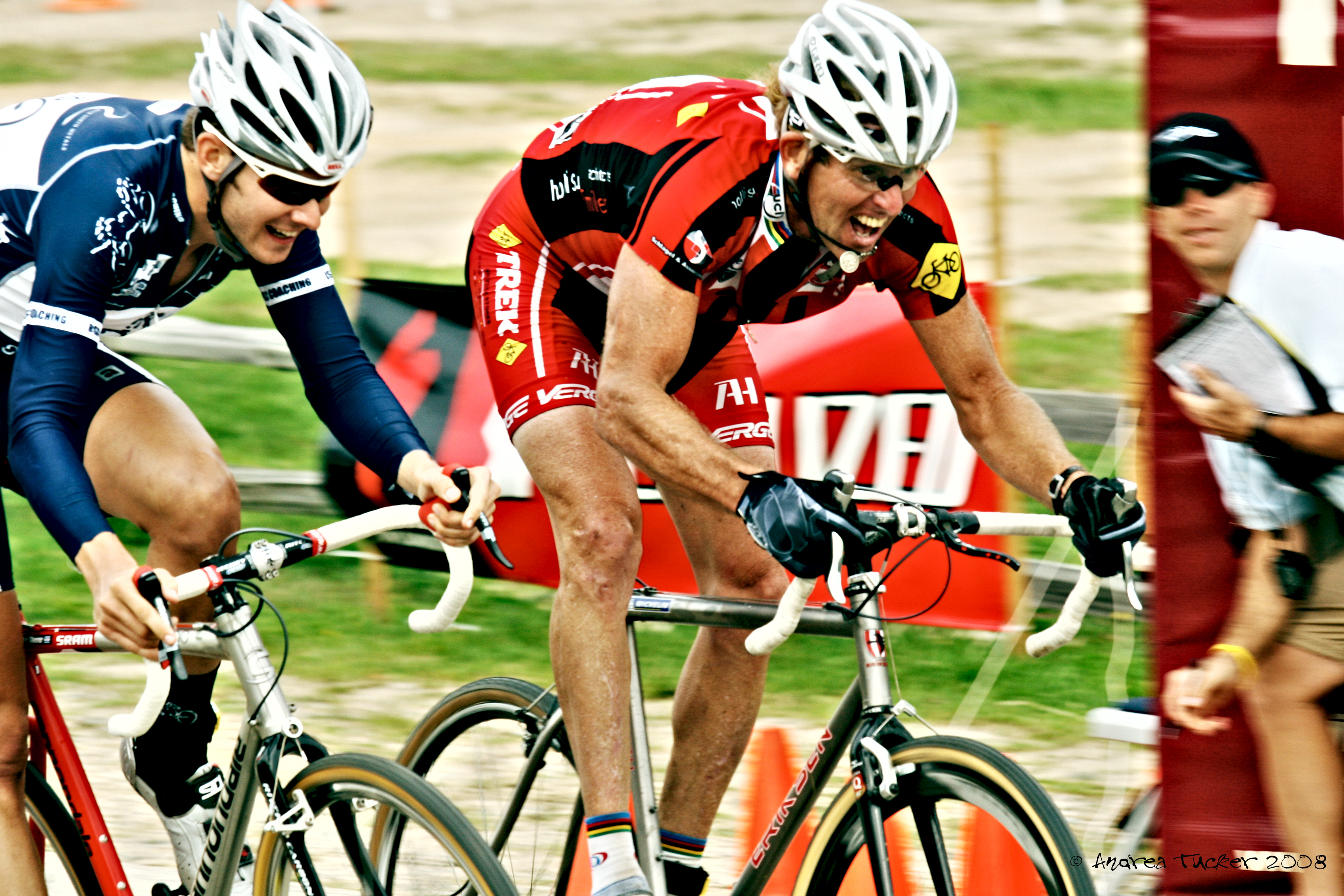