The Primavera races are held on virtually the same 6 mile course both Saturday and Sunday. Only Sunday, they cut a mile or so off the top of the climb and do more laps. I’m not sure which course was the harder of the two days. The race promoter reminded me that I had raced the race back in 1984. He actually brought pictures of the Tour of Texas, from the day. There were a lot of pictures our women’s team, Raleigh, especially, Marianne Bergland. She was and still is, beautiful. Anyway, I’d done tons of miles last week and was planning on JRA (just riding around).

I pretty much did that on Saturday. The race keep splitting up for no apparent reason. It seems like a lot of the riders down here like to initiate moves and get into breaks. Then it’s over. They forget the next step, that is, pulling. I finally bridged up to a group of 10 or so guys. I have to admit that I was one of those guys that wasn’t driving the break. There were too many guys with different abilities and a bunch of guys sitting on. Small groups of 2 -6 guys kept connecting from behind. Eventually the break should of been termed “the field”. There must of been nearly 30 riders there at one time. After 60 or so miles, things started going abit fast up the hill and people started getting shelled. It got down to 10 or 12 of us. Stefan Rothe from the Mercy Team punched it pretty hard a couple times, but it always came back together. I felt pretty good, but not one of the guys in the break was going to let me ride away. It’s not that I was “marked”, but I was “marked”. Finally, Matt Ankeny from Mercy went up the road. He got out of sight pretty easily. There was just one lap to go. I figured I could get away from everyone but Stefan. I told him I was going and that when I got up to Matt I’d pull and make sure I didn’t drop him. I got clear pretty easily and caught Matt on the climb. I was here for training and felt in a generous mood, so I pulled hard the rest of the lap and Matt won.

Sunday was a repeat, almost. The wind was blowing 25 mph, but from the wrong direction to make it hard. Tailwind up the first half of the climb. Lots of small breaks up the road. Finally, with an hour to go in the race, Stefan went to the front and rode away from the field. Steven Wheeler was already away. Alex Boyd and Brian Sheedy were in between. I was way back in the field when we got to the climb. I jumped with the tailwind and made pretty good progress up to Alex and Brian. They were kind of bogged down, so I went the rest of the way up to the front two. I convinced Stefan to wait for Alex and Brian, figuring that just 3 guys wasn’t enough. And it is always good to have a San Jose guy with you in the break, down here in Texas. We kind of rotated the next 4 laps, with Stefan, Alex and I doing the majority of the work.

Finally with two laps to go Stefan attacked on the back side of the course and the other three got shelled. I felt pretty good still, but was starting to get the twinges of cramps. (Probably from one or more of the following reasons-not enough liquid, undertrained muscles, electrolyte imbalance, moon out of phase, etc. I’ve had an on and off cramping problem for awhile now. I think it is something that is experienced by a lot of us, but no one gets them for the same reason, and everyone but me, has a solution.)Anyway, Stefan “talked” to me at my weakest moment and I was forced into being generous again. I thought if he attacked hard, I was going to cramp up. Anyway, he’d won the race the year before so it was important to him. And he is local, and was riding super strong, so it wasn’t a bad thing. But, getting 2nd two days in a row on the same course isn’t something that sits that well with me. Really kind of irks me a bit.

But, I did come down here to train while the weather is still nasty in Kansas. And it has been really hard training. Actually, I’d have to classify Sunday as pretty hard racing. And we’re still here. Gonna stay a few more days and watch the weather up North. And, get the local guys to take us on some more of those killer Texas Hill Country rides. 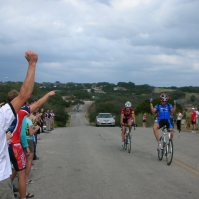