I was still thinking over going to the NRC race in Winghaven yesterday. But, it was way too late after the race finish in Grafton to head down there. It was supposed to be in the upper 90’s and humid in St. Louis. The rest of my TradeWind Energy team was racing there. Ben Raby was there driving the Sram car behind the lead group, and was calling, giving me minute by minute updates. Brian Jensen got away early, going for the KOM, most laps led prize. He was away virtually the whole race and by the time it came to crunch time there were only 6 riders left that catch him. He got away again with Andrew Bajadali, Kelly Benefits, at the end and finish 2nd in the race and won the KOM. Pretty phenomenal result. Off the front all day in the heat and getting away again at the end. He was cramping during the race. I would of been seized the way it’s been going recently.

Anyway, here, another dusk criterium finished. This one was in Manitowoc, a small town an hour North of Milwaukee on Lake Michigan. It had a very pretty downtown. The course was a little over a km. Four left corners. Flat. Almost like a track race.

The course being what it was, the race was going to finish in a field sprint. It was apparent early on that I was going to be marked by a million guys from the teams with a rider in overall contention. So most of the race I just hung out half way back in the field and chilled. The race was going pretty quickly. It wasn’t hard, but towards the end when I was messing with my odometer, I had a 29.6 mph average. That was mainly because there was little to no breaking at any corner.

Nothing much to say until the last lap. It got going pretty good. I was near the front. On the back stretch, Adam Bergman and a Rio Grande guy got into a serious head butting contest. It wasn’t just for an instance. It was nearly half the back stretch. The finish line was 150 meters after the last corner, just the way I prefer it. I had planned to jump from the next to last corner, but got jammed up a little and missed the window of opportunity. Adam Bergman got the jump with Frank Pipp right there. I was drag racing a guy from the Panther team and ended up going way too wide through the corner and was never connected to the front two. I managed to hold on for 3rd.

I kept getting called up for all these podium presentations. Leaving the podium for the last time, I slipped on the aluminum steps and twisted my knee and scuffed up my shin. Bike racing is a dangerous sport.

No race today. I’m trying to decide whether to go home and get ready to race in Kansas City Friday, Saturday and Sunday, or hang here for a few more days. I’ve raced 9 out of the last 12 days starting with Nature Valley. It’s not like I’m going to get much fitter. The temperatures the next couple days in Kansas are supposed to be over 100. And probably pretty humid. It’s already humid here in Wisconsin, but yesterday it was hardly 70. We only really have 6 riders on our team. Splitting up the weekend and finishing on two podiums in different National caliber races is a pretty good result. Not sure that will happen that often on a seasonal basis. 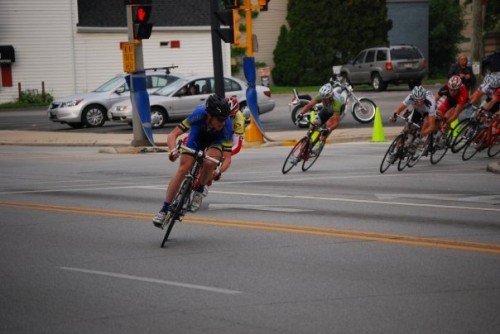 Way back out of the last corner. 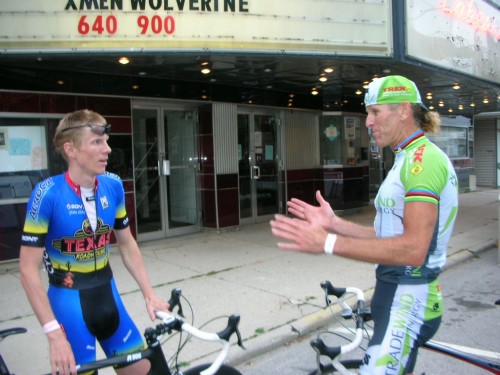 Adam & I rehashing the sprint. 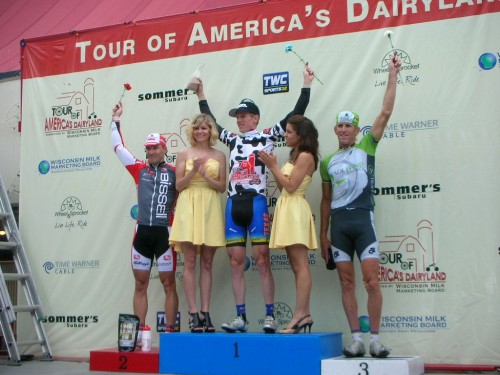 Podium for the day. Frank Pipp, Adam Bergman, and me. 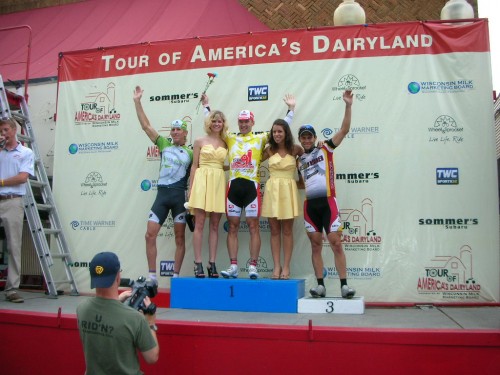 Another podium shot. GC this time. (It's not like I have a bunch of different photos to choose from.) Me, Frank Pipp, & Chad Hartley.