I’ll be the first to admit that I’ve rolled a ton of stop signs.  When I first started riding, it wasn’t even an issue.   People that drove cars didn’t blink an eye if a cyclist rolled a stop sign.  It was to be expected.  But, that was a long, long time ago.

Somewhere, through the time, drivers started getting up in arms about cyclists.   It isn’t only rolling stop signs, but nearly everything, just riding.  I wonder why that happened?  More cyclists, or people having less time?  Whatever the reason, even if you are the most responsible cyclist, concerning laws, you will feel the wrath of drivers occasionally.

Cycling laws interest me.  Each state and their perceptions of what is important enough to restrict cyclists from doing.

Here in Kansas, we have a two-abreast law, which makes it legal to ride side by side.  Plus we have the 3 foot passing rule.  These two laws make it nearly impossible to pass a couple cyclists without crossing the centerline, which is how it should be.   Nearly the only way to pass a cyclist when there is oncoming traffic is for the car to cross over the centerline.  The 3 foot law makes that pretty much mandatory.

We, in Kansas have a Dead Red Law too. which allows bicyclists, and motorcycles, to legally proceed through red lights in Kansas when it is safe to do so.   It is a good law for cyclists.

I saw an article that in California, a couple politicians introduced a bill that would allow cyclist to roll stop signs.  Treat them as yield signs.   This would make a huge difference riding nearly anywhere in the state.  When I’m riding in Southern California, you could go through 100’s of stop signs on any given ride.  I think the state of Idaho has this law already.

Plus, like the creators of the legislation understand, it is safer for the bicyclist.  We all know how to get across an intersection after stopping, but you have to think of a person that hardly ever rides that has trouble locating their pedals while starting, thus looking down and not paying enough attention to the cross traffic.   Going slowly across a busy street isn’t the wisest way to cross that street.

I have no idea whether this will become law.  I’d bet not, but what do I know?  I’m way more interested in alleviating the animosity between cyclists and drivers.  I don’t really get why it even exists.  You’d think that a driver would think it is great that someone is out riding a bike.  For commuting, recreation, or actually training.   People are fickle. 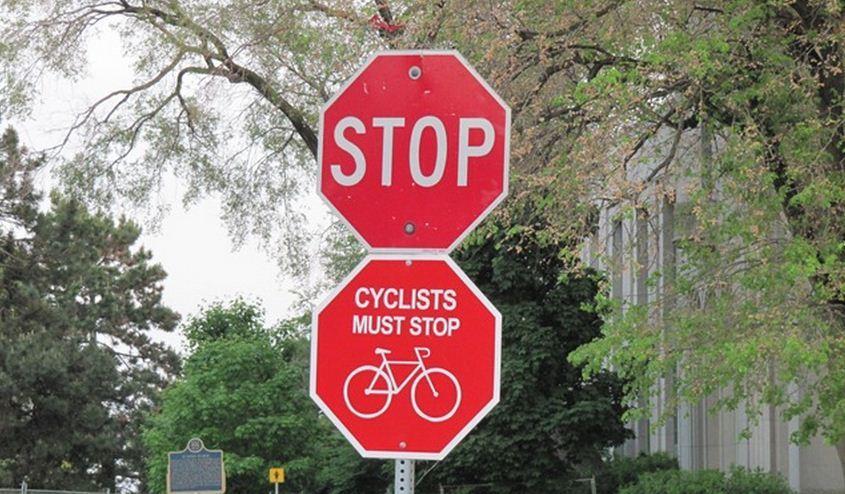 Think all the money they would save putting up special signs for bicyclists.