Disc brakes are back in the headlines.  The UCI decided to allow their use again this year. Marcel Kittel and Tom Boonen were two of the most prominent riders using them so far.  Then Kittle got caught up in a crash with Owain Doull, Team Sky, and Doull claimed he was sliced, at least his shoe was sliced, by Kittel’s disc rotor.  I think he was wrong.

SInce then, the CPA has called for them to be disallowed.  And lots of websites have done experimental videos showing if a disc rotor can cut things.  Velonews did a couple videos that showed, if someone is powering the wheel, then it could possible cut through a cycling shoe.

The only problem with that experiment is that when someone has their cycling shoe up against someone’s brake rotor, no one is pedaling that bike.  That bike is most likely going to hit the ground very soon, riderless.  And the time they held the pig’s skin and shoes against the rotor was so much longer than a person could ever be touching a brake disc in a crash scenario.

Think how many crashes, mass pile ups have been at the start of MTB races since discs have been used.  I’ve never heard of anyone getting sliced by a rotor.  Add cross races too, now that disc brakes are becoming commonplace.  I’ve never seen someone in MTB or cross cut by a disc rotor.

I’m not big on the disc brake switch.  It is a huge change and makes exchanging equipment, especially on the road, very difficult.  When the manufacturers get their shit together and make the calipers more adjustable, maybe make the pads retract further, then the wheels might be interchanged much quicker.   Until then, maybe they are only good for individual racers where riders have their own equipment, in pits, available.

If you gave me a choice between touching a rotating brake rotor or having a guy run into me with a chainring, I’d take the rotor everytime.  I’ve been hit by chainless chainrings and those things are very dangerous.  An exposed chainring is so much more dangerous than a brake disc connected to a hub.   I very much doubt the CPA is lobbying to get rid of those.

***Okay, I just went out to my garage and spun a MTB rear wheel up to speed.  I could stop it very easily with my thumb.  I do realize that hand skin is tougher than other skin on a human’s body.  I’d think if a leg or arm came in contact with a rotor, from the top, where it would cut you, then the same leg or arm would make contact with the spokes of the wheel too, so it would not only be the rotor stopping the wheel. 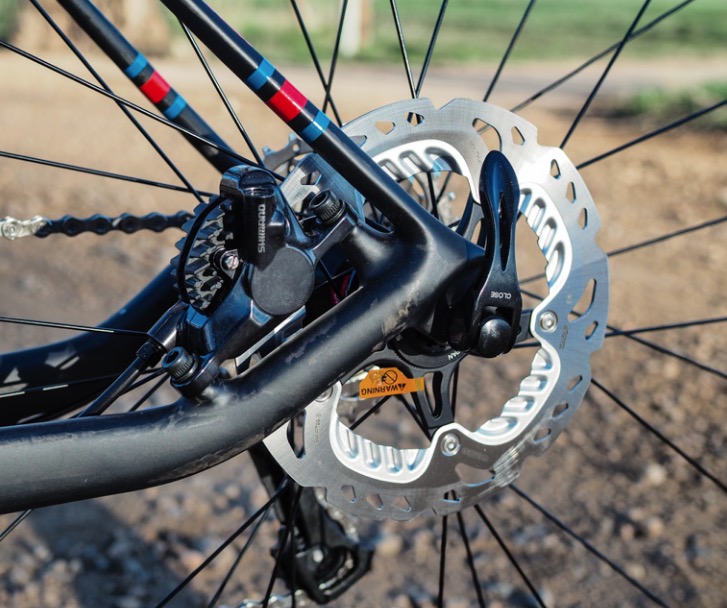