Mike Crum, of all people, left a comment yesterday about what I thought about the Omloop Het Nieuwsblad situation where the lead group of riders rode on the sidewalk instead of the cobbles, after the UCI had explicitly explained that riders were going to be disqualified for doing so.  Here is a link to the Cyclingnews article.

I actually hadn’t read anything about it and thought it is an interesting topic, with more than one side.

I’m a little on the fence about this.  There are rules, I guess, that prohibit riders from not riding on the road.  But, like Greg Van Avermaet said, the rule is nearly impossible to enforce.  They didn’t enforce it once again, so the next time it will most likely go the same.

I am sort of surprised hearing about this.  I have raced in Belgium a bunch and have always ridden the smoothest line, even if that means in the dirt next to the cobbles. But, things change.

I guess if they really want to enforce the rule then they need to physically block the “alternate lines” initially.  Because, obviously, the riders are going to ride on the smoothest choice if there is one.

And they need to enforce the rule.  And in this case, enforcing that rule would have kicked at least the first 4 riders out of the race.  Maybe even many of the guys finishing directly behind them.  And that wouldn’t have pleased the organization one bit.  Like Cyclingnews wrote, the break was a “dream podium” for the organizers.  And sometimes the organizers override the officials.  Many times.

I had a similar experience, not exactly but close.  And I was relegated in placings.  ‘

It was at the Coor’s Angels Cup in Los Angeles .I had won the Coor’s Devil’s Cup and this was the sister race.  It was a tight criterium, miss and out format.

Huge Walton, my team mate, was off the front.  I think he might have been with Thurlow Rogers, but don’t quote me on that.  Anyway, I was in the field, sprinting each lap, trying not to get pulled.

When there were maybe 15-20 riders left, I was at the back on the finish stretch.  I sprinted up the gutter and flew past the field, as they sat up after the sprint.  I just kept going.   They kept pulling the field and I was just riding around by myself. Eventually the race was over.  I think I finished 3rd, but that might be wrong too.  Probably 4th or 5th.

Anyway, we were all stoked, with Huge winning the race and getting all the primes.  We went back to the hotel to change and come back to awards.  When we got back, the results had changed and I was something like 19th.

I asked someone who said I had been pulled because the official had deemed I have left the road. He ruled something like going below the blue line on the track, thus, left the road to passed the peloton.

The course had barriers and there were thousands of spectators.  We called the official and I asked how I could leave the road?  I told him that most everyone that is sane would consider the road to be from one curb to the other curb.  Everything between was fair.  He disagreed and said he ruling would stand.

Anyway, we had already won the race and it was all good.  Of course, I was pissed, thinking I had been cheated, but now it is just a funny memory.

Back to the original topic.

If i would have been in that break, I would have ridden exactly like the break did. Those guys have ridden those roads 100’s of times and probably have never ridden on the cobbles.  The line they were riding is the historic line I’d guess.   I assume they knew that they weren’t going to be DQ’d or they wouldn’t have done it.  It was probably a risk/reward deal, them knowing that the risk was minimal.

Does that make it right, well, sort of.  They won the race and didn’t suffer any penalty from breaking the rules.  And there were lots of other guys doing exactly the same thing.

I honestly think the rule sucks and part of the beauty of these races is the skill to negotiate the course, no matter where that might be. 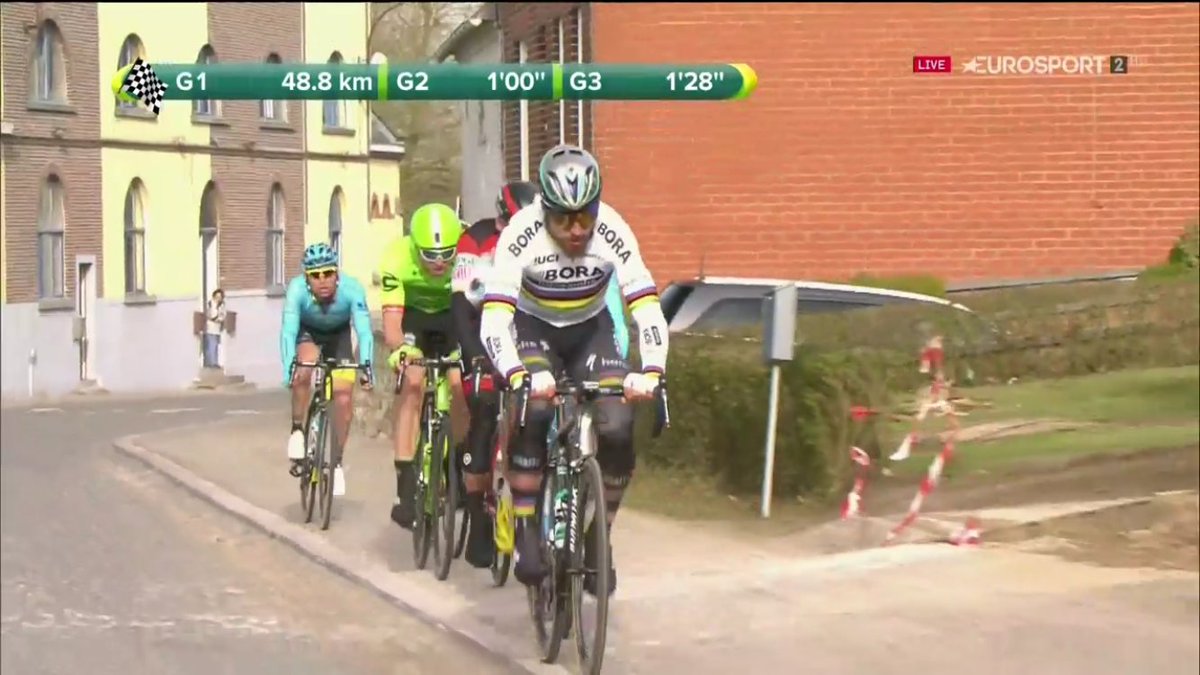 Caught in the act.