Bill and I, plus a few others spread out over a few days, have been riding back and forth to Lawrence on gravel.  It is one of my favorite rides, super scenic and pretty hard.  It is a nice ride to do if it is windy out, since there is some shelter, in places.

Anyway, the gravel here is really good right now.  Mostly it is nearly pavement.  Super smooth pavement.  But on the RIver Road, they have dumped a new load of gravel on a long section by the railroad tracks.  New gravel is always slow and much harder to negotiate.

On Sunday, when we were riding over to Lawrence, the fast line was really off the road, where the grader had driven, but there was no gravel.  It looked a little loose, but it was pretty hard and way easier.

It got me thinking about how important it is to ride the right line when there are choices.  Of course, riding gravel, there are always better lines.  At least where there is a lot of loose gravel.

LIke I said above, much of the gravel in Eastern Kansas right now is hard as rock and you could ride a road bike on it without worrying too much about flatting.  But when you get to the new, loose stuff, that is a different story.

It goes the same with cobbles.  I’ve raced a fair amount over in Belgium, on the road.   Not much when I was an amateur, but later on after I turned Pro.  I hadn’t ridden much on cobbles until I went over to Europe with the Wheaties/Schwinn team.  We were based in Germany, because a couple guys on the team were from there, but we drove to Switzerland and Belgium to race.

One race I remember vividly was one that the 7-11 team was at.  We hadn’t seen many of the guys were knew, but Davis and his whole team were at the start in Brussels.  The race was pretty important, so nearly all the best teams were racing.  It was longish, 250 km, with lots of cobble sections.

Before the start I ran into Phil Anderson, who had ridden Coor’s Classic on my Levis team and I knew pretty well.  He’d been racing in Belgium for a long time and knew pretty much all the cobble sections well.  Plus, I knew Carlo Bomans.  I raced with him at the Tour of Chili and he was riding for Mapei now.   So, both of them told me to stay close because positioning before the cobbles was key.

It was sort of early in the race, maybe 1/2 way and we’d already ridden some cobbles.  I’m not really that good on cobbles.  I don’t have a ton of power on my seat and standing really isn’t an option.  So I have to try pretty hard.

I was riding pretty far back in the field, maybe half way back, next to Davis Phinney.  And it started going pretty fast.  It was obvious that we were getting near a cobble section.  Davis said something like, this is so stupid that we go so hard to the cobbles when it all gets back together anyway.

I looked up and saw Phil riding near the front, and he was so good at positioning, so I went to the side of the peloton and put in a huge effort to get to the front.  I looked up and the lead motorcycle, which was a couple hundred meters ahead, did a little left right jog.  I could tell the cobbles started there.

It was a sprint, but I got to the jog in the top 3.  It was a long cobble section, super narrow and rough.  There was a crown on the middle of the road and next to the crown were two pretty rough wheel indentations that had misplaced cobbles.  Pretty unrideable.

I was hardly holding the wheel ahead of me.  The I looked to the left and next to the cobbles, there was a dirt path and was smooth.  There was hardly anyone standing on it.  I jumped across the wheel dips and got onto the dirt.  It was so much easier.  But this is where I made a mistake.

Instead of just killing it, I used the smooth dirt to rest.  Pretty soon another rider, that was ahead of me, moved over, then another and finally I was 5 or 6 guys back on the dirt and the guys on the cobbles were going way faster.

So I moved back onto the cobbles, got stuck a little in the rough part and finally got onto the crown.  I was shot.  I moved back to the dirt, right when the front of the remaining field finished the cobble section and hit the smooth road.

I looked back and there was no one behind me.  No riders and no cars.  I was kind of dropped, but maybe only 10 bike lengths off the back.  I made a huge effort and barely got to the back of the group.  Your bike feels like it is in molasses when you get to the smooth road, after riding on the cobbles and I had been redlined for the past 3 kilometers.

There were maybe 20 riders in the front group.  I sat on a little, then started rotating.  We rode the next 2 hours petty smooth.  I kept looking back and didn’t see anyone.  Finally, right when we were approaching the finish circuits, I saw a big group coming up.

It was probably twice as big as the front group.  Davis was in the group and they had been drilling it ever since they got dropped.  I could tell Davis was hurt and couldn’t help myself but repeating his little line before we hit the cobbles.  Something about how stupid it was going so hard to get into position for that cobble section.

Anyway, it was a field sprint and I did alright.  And the only reason I had any energy left at all was because there was a dirt path next to the cobble sections.  If I would have had to ride on the rocks the whole way, I would have been in the 2nd group, going way harder than I did for way too long of a time.

I used this technique the rest of the time in Europe.  Many times, even climbing, there is an alternate line which is easier.  It is just key getting to that line first, so you can ride at the front. 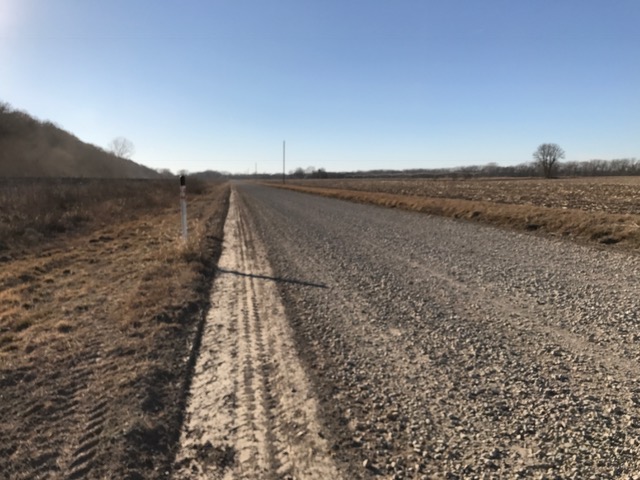 The gravel near the railroad track. The dirt on the left was the line here.

12 thoughts on “Picking the Right Line”