I’ve always liked to race a bunch.  I’m not sure why.  Maybe training becomes mundane or something, but that isn’t it.  I guess I figure that if I’m riding enough, why not test myself through races.  Races are never the same.  Races nearly always create a small life experience. Plus racing has been the only way for me to get to a higher level of form, which is always sort of a goal.

So I’ve raced a lot.  I might be the first guy to really race year round.  Cross Nationals used to be towards the end of December and the first road races would be the end of January or early February, so there wasn’t much time for an off season.  Not that I wanted one.  I like the lifestyle and routine.

That was back when the European pros used to take a few months off over the winter and then try to ride a little before heading to Sicily to race into shape.  And by racing into shape I mean riding long races really slow.  No one showed up in shape, they just rode into form.

We’d used Tour of Texas for the same thing.  I remember heading down to Texas one year with maybe 400 miles on my legs.  I was in no shape to race.  I think that was the first year of “the new” 7-11 team.  Those guys had been down there riding big miles for a few weeks.

They were pretty much in race shape and the rest of us were in off-season form.  It was ugly.  The first road race I got into a break with 5 guys from 7-11, me and Thurlow Rogers.  I was dying in a sidewind, hardly able to pull, but knowing if I didn’t they would just gutter ride me off the back.  There was a final corner, maybe 5 miles from the finish, and then it was going to be strong tailwind.

I had that corner as a goal.  Just make it to the tailwind, where I could rest.  We turned the corner and probably less than a mile later I was dropped, riding by myself. The thing with strong tailwind is that you don’t get much relief from drafting.  And I needed relief.  I couldn’t believe I was dropped in tailwind, but I was young and naive then.

The best thing about Tour of Texas is that Richard Degarmo, the promoter, knew it was a good place to train and the races were set up around the training, sort of.  It sometimes lasted over a month and we’d race on the weekends, sometimes a midweek training criterium, and then train the rest of the week.

After a month in Texas, we’d all be up to race form.  It was really easy to slay riders that didn’t have the ability to flee the weather early season.  It started the season off on a good note.

Now it is way different.  Many, many riders have the ability to flee the weather.  Or they have moved somewhere that has good weather all year round.  Or their teams are doing training camps that allow their riders to get early season form.

I got thinking about this for a couple reasons.  I was riding in Sand Diego with Robin Carpenter, Holowesko/Citadel Cycling Team.   He said that their first race would be at Joe Martin.  That surprised the shit out of me.  We were riding in January and he wasn’t going to be racing until nearly April.  That is pretty late in the season considering guys have been racing since early January.

Plus it got me thinking when I was a junior, I probably didn’t even think of riding outside until the end of February.  That was back when winter was really winter.  For some reason, that is great for riding, horrible for the planet, winter isn’t really winter anymore in Eastern Kansas.  I would first start riding in a down coat, with tennis warm-up bottoms tucked into my socks, so they didn’t catch in my chainrings.

That’s not the case now.  Yesterday it was nearly 70 again.  Today is going to be closer to 50, but still alright.  Early season here the problem is wind.   It can be crazy windy.  That is the cast today.  It is supposed to be blowing over 30 all day.  That isn’t good for lack of form.

We’ve got a gravel ride planned.  That is a way to avoid wind some, since many of the gravel roads, especially east are sheltered some.  Still, it is gonna be ugly.

I was in a race in Iowa, a few years ago, and in a break with my team mate, Bill Stolte and two other guys.  We were going pretty well and after an hour or so, one of the guys asks me if he can sit out a few pulls.  He tells me that it is the first time he has ridden outside that year.   I said to do whatever you need. The other guy says that it is the first time he had ridden in shorts. That amazed me.  It was late April.  Bill and I had already raced at least 10 races, hanging out in Austin for a least a month.  They both were going pretty well, considering.  We did drop them a little while later, but we had better form.

Okay, if you don’t have the ability to ride outside, don’t stress.  Trainers are better and there are races all year round.  Eventually form comes.  Just wait for it.  Don’t let the internet, showing all the results, from throughout the world, freak you out.  Just enjoy. 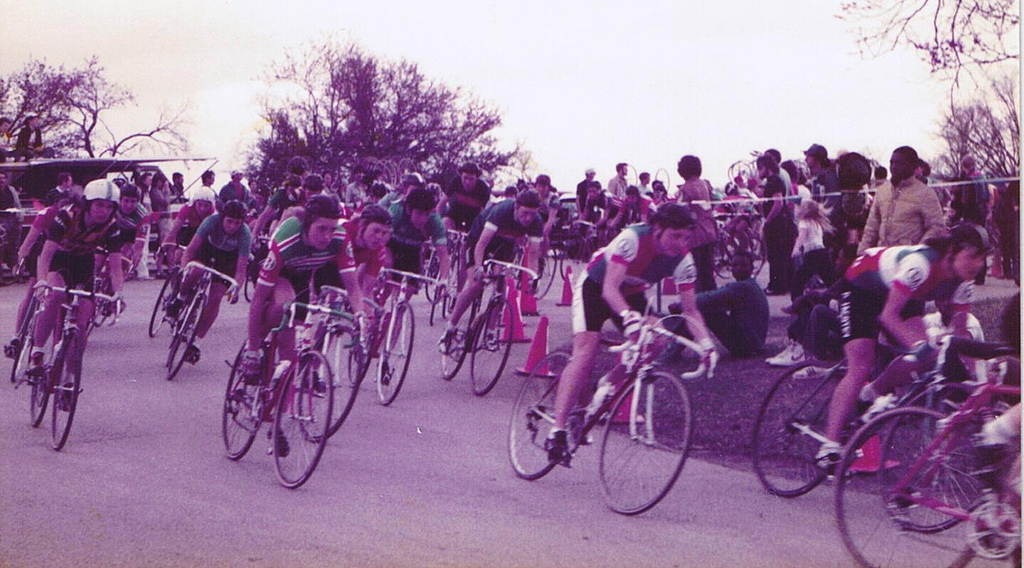 The women’s race at Tour of Texas had the best women from throughout the World.

19 thoughts on “When To Start Racing?”