I’m not big on structured training.  I’ve never really used it, so can’t really knock it, but know I wouldn’t enjoy it.  Does that make sense?  I think if I’m going to go that hard, I might as be in a race.  And that is my normal practice.  Get fit enough to race and then race to get fitter enough to race well.

I’ve done this pretty much my whole bike racing life.  I like riding with guys and training hard.  I guess that is structured somewhat.  I normally train pretty hard, at least compared to other groups I go ride with through the country.  I don’t know if that is a good thing or not because, again, I’ve never done it any other way.

I say all this, but the invention of the Garmin kind of mixes up the equation some.  I like having a Garmin and I like the data saved.  I’ve never really kept a training diary and Strava is now that diary.  Way more information that I would have put down in writing, for sure.  Mileage, time, speed, heart rate, power numbers, etc.  It seems kind of silly when you think about it.

My “new” Garmin isn’t doing that well.  I have a Garmin 1000 and it has always been temperamental.  I had a Garmin 800 before that, but the day the Garmin 1000 showed up, Tucker decided it was time to make the old Garmin his toy and chewed it up.  Bad puppy.

Anyway, I want to send this Garmin back to Garmin to get fixed, but think they have already done that once.  Plus, I don’t really want to be without it while it is being repaired.  My Garmin is getting super hard to charge.  Plus, after it is charged, it doesn’t stay that way very long.  That is just the start of the list.

Sometimes it locks up.  Right now it won’t download data easily.  It won’t sync to my iPhone, so I have to plug it in to try to get the data downloaded.

I have been thinking about getting a newer Garmin.  Then I read this review on the new Garmin 820.    These guys don’t seem to be much happier with the new 820 than I am of the 1000.  The review said only 5 hours of battery life.  That won’t do it for me.

So I’m in a predicament.  Eventually my Garmin will just quit working.  I thought that was right after Christmas, but i came back to life.  Maybe I can nurse it along for another month and when Trudi heads to Europe to work, in March, I can just use her’s and send mine in.  Until then, I guess I’ll just put up with it.  I don’t like it much. 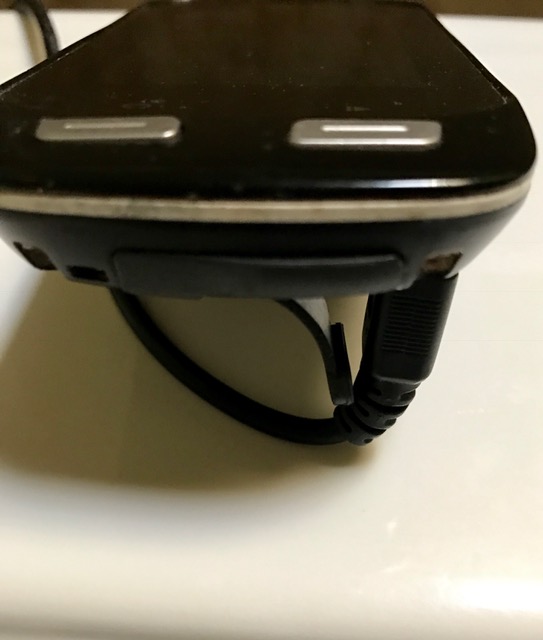 This seems to be the only position where I can get it to recharge.

43 thoughts on “Relying on your Garmin”