The thing that is hard to understand is that the power meter is just a valve cover cap.  Yep, a small thing you screw to the top of you tire inner tube valve.   It is hard to grasp how that could possible measure the power that a rider is putting into their pedals, right?

I don’t get it.  But I’m not smart enough to say that it is impossible.  There are lots of inventions that didn’t seem possible initially that become reality.

According to Arofly’s website, their technology is “a patented air pressure differential technology based on the pitottube design, from the F-117 combat aircraft.”

I have no idea what the pitot tube design is.  I’m going to look it up right after finishing this. Okay, I lied, I looked it up.  And I still don’t know what it is.  It might take a little more time.  I think it is a little complicated.

The power meter, if you pre-order, costs $129.  And, for that price, it comes with a holder for your phone.  That is very fair and, by far, the least expensive power meter on the market today.  So, it will be the smallest, lightest and cheapest.  Appealing.

Like I said above, just because it seems doubtful that this might work, doesn’t mean it won’t.  I remember when Jim Gentes walked up to me at Interbike and showed me a styrofoam prototype helmet. He asked me if I would be interested in wearing one.  I said sure, thinking to myself that there is now way that piece of styrofoam would meet the standards to qualify to be a safe helmet.

Jim made the helmet and that is when Giro helmets was founded.  Pretty incredible for 31 years ago.  Revolutionary advance.

Anyway, it will be interesting to see if this works.  I’d love to get my hands on one.  I hope to be riding outside pretty soon and would be happy to test one and give a real review.  Until then, we’ll just hope. 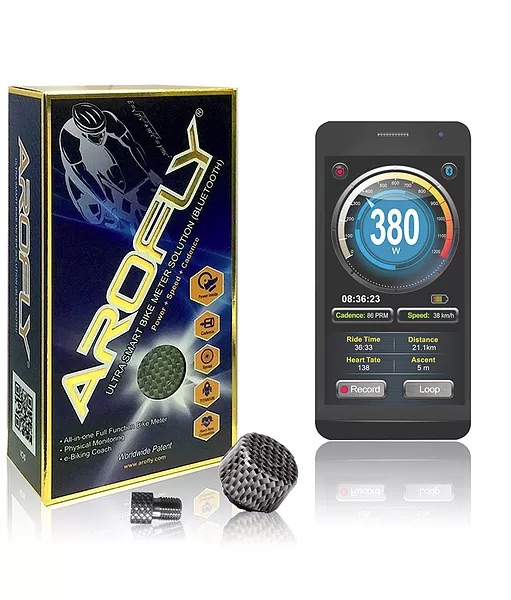 It’s the little woven valve cap below the boxes.