I haven’t been spending very much time on the Internet and I rarely go to Facebook, but yesterday a couple guys posted stuff about Whaling City Criterium, from the past.  I did the race just a couple times, but was lucky enough to win it once.

It was a super race, big prize list and challenging course with a small hill.  Plus it was in a pretty great town, very interesting fishing village-type place.  I truly enjoyed going there.

The year I won was 1985.  That was the year I crashed into a car at the British Milk Race going super fast and had broken myself up pretty good.  But I got healed and I had just finished the Coor’s Classic.  I had been training pretty hard, at altitude, for the  World Road Championships in Italy.  It was on the way, sort of, so I flew from Denver to Boston, raced and then back to Boston to fly to Italy.

I only had two Raleigh teammates there, Greg Demgen and Paul Biskup.  As it turned out, that was enough.  The morning of the race, we woke up to rain.  Like really raining.  Paul, Greg and I went out and warmed up pretty hard.  We were taking the race pretty seriously.

The race started fast.  Early on, I got off the front with Alan McCormick.  I’d raced with Alan for years and knew exactly his capabilities.  Alan and I worked pretty good together.  About 1/2 way through the race, I was leading into a slight off-camber, shallow corner and next thing I know I’m sliding on my side into the curb.  I got up and rode to the pit to take a free lap.

Alan came around fairly soon and I got back in.  We had a set pulling routine, but when we got over to where I fell, I pulled over and asked Alan if he’d pull through the corner.  I was a little skittish.

We lapped nearly the whole field.  At the end, we were in a small group of guys.  I think Alan had a teammate in the group.  The race finished up the hill, then a right corner and a short way to the finish.  Obviously the first guy through the last corner was going to win.

I jumped and was surprised how quick Alan was going,  I was hardly gaining on him.  Just 50 meters before the corner, Alan lost momentum and I came around him just in time to lead through the corner and, thus, win the race.  Greg finished 3rd, so we had two riders on the podium.

Back then, it was good prize money at all these races.  I’m sure we made over a grand each, all three of us. There was also super post-race parties.  I was still focused on the Worlds, so took that night pretty cautiously.  I hung for a while and then walked down to the pier and watched all the fishing boats return.

It was pretty late, well after midnight, and the dock was busy.  It was amazing the different fish that they were unloading off their boats.  I stayed down there at least an hour watching.

I had a rental car and then headed to the Boston airport.  I had a flight to London, then London to Venice.  When I got to the airport, at the ticket counter, it said that stand-by tickets were $100.  My ticket was something closer to $400.  Those were the days that you could get your money back for plane tickets.  When I got up to the counter, I asked the woman if there were stand-by seats available and she said there were tons of open seats and she could give me a seat assignment.  I said sure, so pocketed another $300.  I felt rich.

Anyway, thanks to Mark McCormick for posting the newspaper article.  It great to see his and his brother, Frank, names in the junior results.  I have some more photos that I’ll try to dig out later. 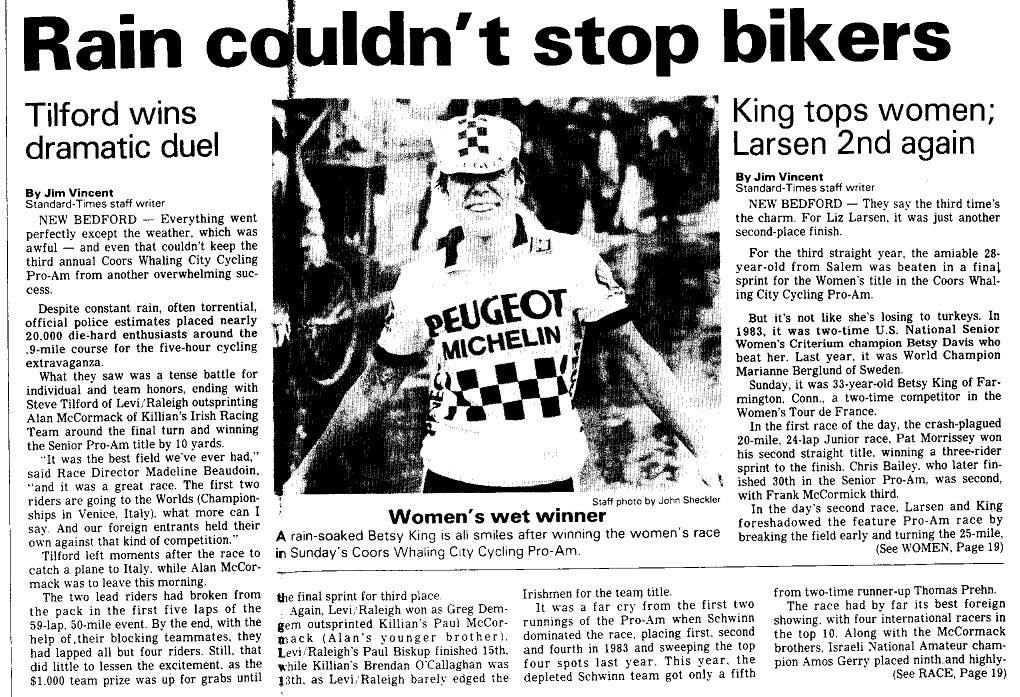 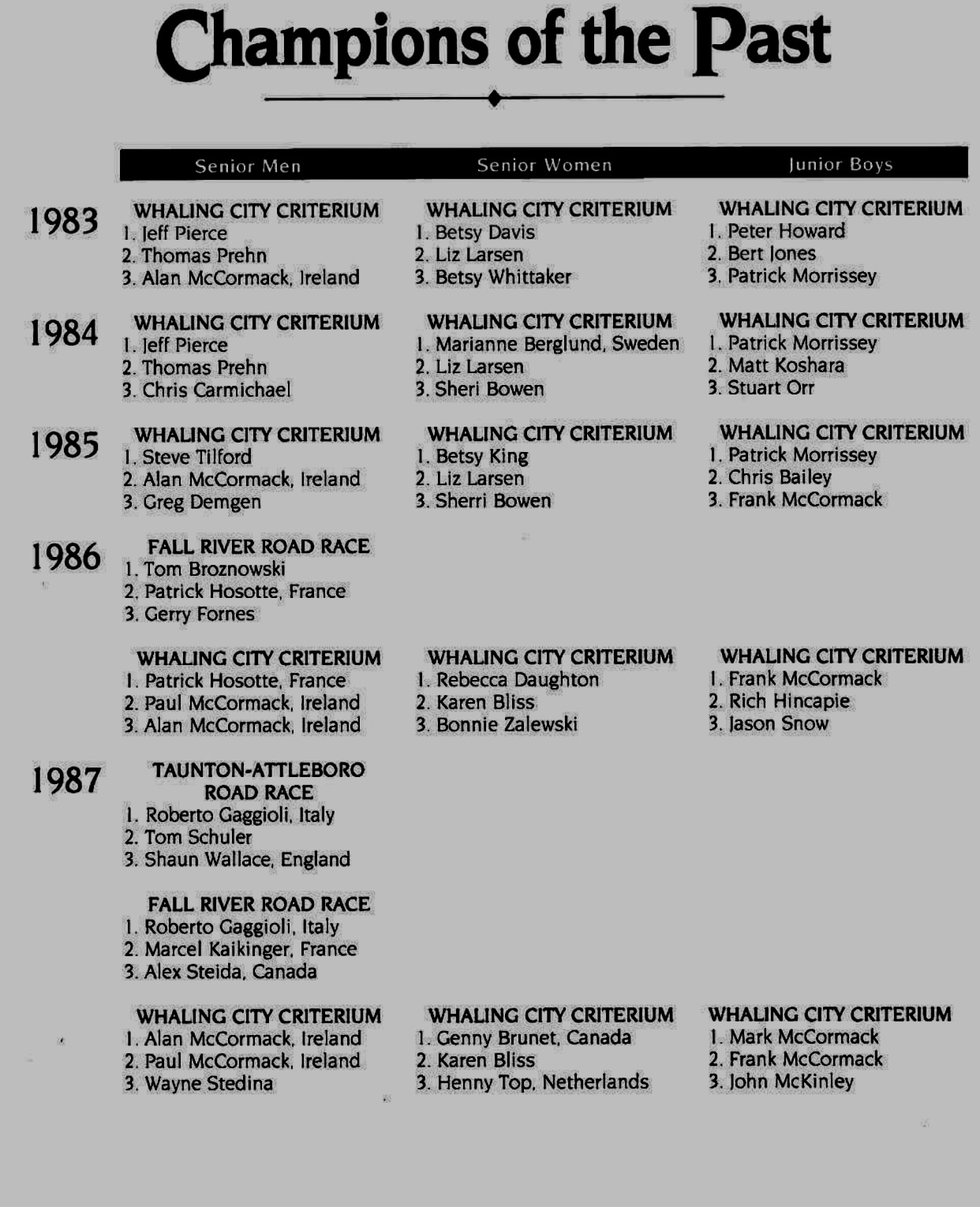 A couple years later,, I felt good and tried my best to stay on Gag, but that didn’t work out so well.  He won road races.  I was riding with Alan then, on the Schwinn team, so Alan finally won the event too.  Wayne Stetina, Mr. Shimano, was 3rd. 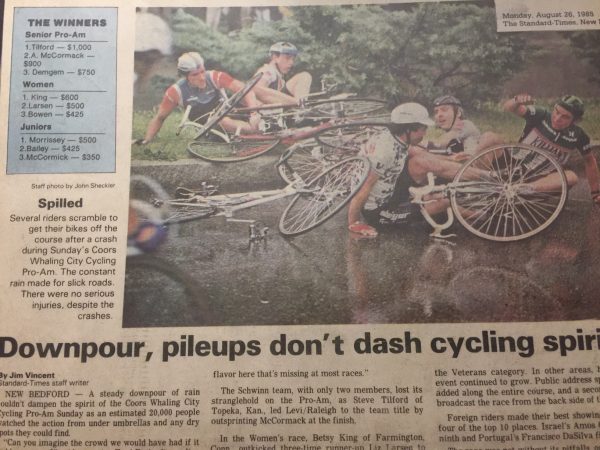 I obviously wasn’t the only rider that fell that day. 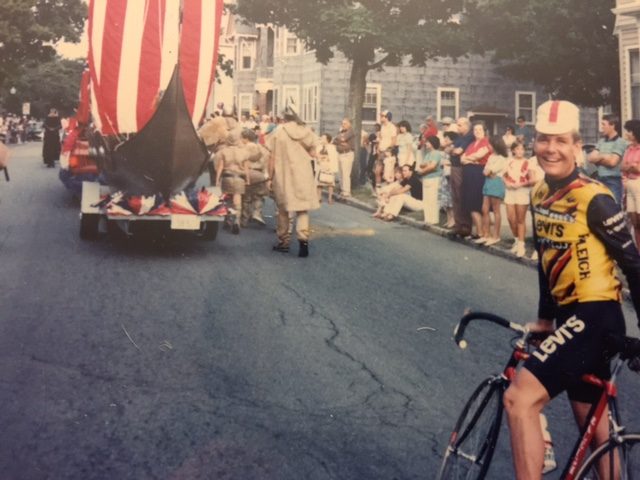 Greg Demgen at the pre-race parade. 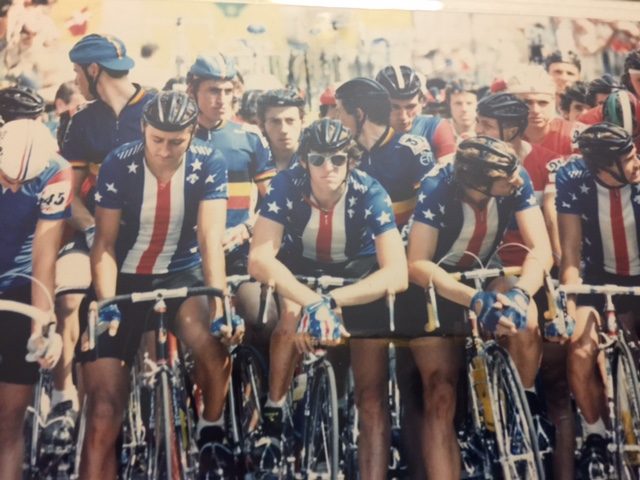 At the road Worlds in Italy. Roy Knickman, me, Thurlow Rogers and Greg Saunders.