This past week I’ve been all over the map.  At least health-wise.  I haven’t connected all the dots, or actually figured it out much at all, what makes things better or worse.  One thing that I have figured out is that if I sleep more, I am less dizzy.  And if I ride the ergometer, I feel better in general.  Less dizzy, less headache, just all around better.

I got the go ahead to ride a little over a week ago at KU Med.  But not really train.  I have to keep my heart rate super low and thus the resistance is low.  The first couple times I rode, I could actually wear a winter hat and not get hot.  That isn’t my historic way that riding inside feels.

Initially, I was keeping my heart rate in the 90’s, so the wattage was under 200.  Yesterday I brought the heart rate up 10, so now it is in the lower 100’s.  It still isn’t much resistance, but it is a lot harder than before.  I am in pitiful shape, maybe not as bad as I think, but i feel generally out of sorts in nearly all aspects of my health, so it feels the same with my fitness.

I’ve spent a fair amount of time, over the years, on ergometers.  It all started back when I first turned senior, or elite, as they say now.  I spent 3 months of one winter up in a government lab in Grand Forks North Dakota, and I had to do VO2 tests twice a week.  The weather in Grand Forks is pretty harsh in December, so I rode inside a ton.  It is amazing how much better you can riding an ergometer when you spend 3 hours a day doing it.

My experience transferred to when I flew directly to the Olympic Training Center in Colorado Springs.  Eddie B. had all the national team guys ride tests to see how fit we were.  I had spent some much time on a Monarch ergometer, that I could kill that test.  My power to weight ratio was dramatically better than any other rider there, which was everyone.  That was only because I’ve been riding one for the past three months.  There is a big difference between training on an ergometer and using that power out of the road in a race.  At least a mass start race.

I have to admit, I am happy that riding makes me feel better.  I still have a headache, but not one that is killing me.  Of course, I am still dizzy, but not like I can’t stay on the trainer because I’m going to fall off.  I think my brain appreciates the small amount of endorphins that I’m giving it.  I think I am so used to them, that I am in withdrawals without them.

Yesterday, I only had 1/2 a Percocet.  I had a quarter one at 4am, then 1/4 at 9am.  Now cold turkey.  I can’t say that I feel that much worse without the opioids than while taking them, which is good.  In general, I’m not big on taking medicine.  Of course, there are times when medicine is critical, but I’ve been reading up on my issues as much as my eyes and head will allow, and I haven’t seen much on any particular medicine actually accelerates healing much, in this case. At least nothing that would bring this whole ordeal up to my speed.  But, as I know, my speed isn’t realistic.

I plan to ride a couple times a day from now on.  The feel good lasts a few hours and I think the riding actually induces more sleep.  I’m not sure which is more important.  I have slept as much as 6 hours straight.   And it is getting easier almost daily.  I think that and the riding as inter related.  I like them both, so even if it isn’t exactly true, I’m going to go with it. 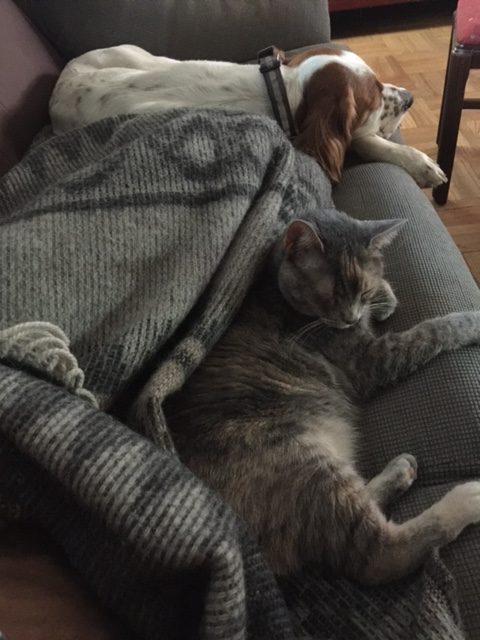 I try to get at least an hour more sleep during the day. I can always count on Tucker, and at least, one cat joins me. 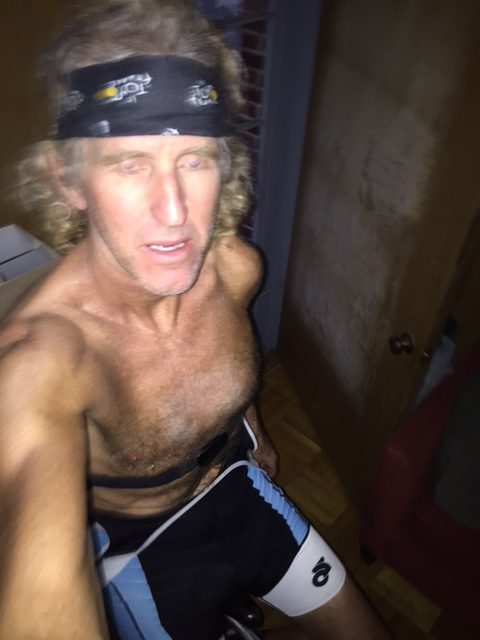 Not the best riding selfie, but this was a few days ago. I’m way more conscience now when I’m riding.