I’ve had a couple bad days this past week.  In general, I thought I was progressing, but when the day heads south, it is hard keeping upbeat thoughts going.

Yesterday, I guess I had a setback.  I hope it was just a setback.  By 7 or 8 last night, I was close to heading back to the emergency room.  The only thing that stopped me was I have already done it once before and knew what the reaction would be.  So I just figured out a way to shut my eyes and rode it out, somewhat.

I did sleep a couple hours last night.  It wasn’t what I’m trying for, but I am happy the night is done.  I feel a tad better this morning, so maybe the sleep is the reason.

So, deep into the night, or early this morning, I started thinking about if what was going on is that just something went badly wrong and if I didn’t get to the hospital, maybe I was just going to pass out and die.  That was a first.  I wasn’t really scared, but was getting close.  I am normally a pretty optimistic type person, so this is really a bet off-track for me.

I’m not feeling sorry for myself.  All cyclists crash, it is part of the deal.  I’ve never thought of this is a reason to quit the sport, or any individual race.  And, I’ve hit my head a number of times too.  This one just happened to be a lot worse.

But, I haven’t thought much about dying in my life.  I’m not sure why because I’ve been hurt, fairly badly, lots of times over my life.  I fell out of a tree and ruptured my spleen when I was 6.  That was a close one.  I was hit by a taxi cab just a couple years later.  And it continued.

I hit a car in the British Milk race going well over 100km/hr.  I was out for a while after that. And broke a lot of bones.

But each of those times, it didn’t cross my mind that I might die.

Both of my parents have died.  They didn’t live healthy lives and I sort of have a hard time understanding how they lived as long as they did.  I have had many friends that have died too. From accidents and illness.    Of course, each time I was very sad.  But I didn’t really relate it to my dying.

Hey, I am over 50 years old.  By all tables, even if I get lucky, I’m close to 2/3’s the whole through my life.  Really, I am surprised that I’ve lived this long.  I don’t have too many regrets.

But this head injury is a different deal.  I’ve been hurt nearly as much as I do now, being broken up in other ways.  But this headache/dizzy spinning deal is pretty hard to ride out.  It is like I’ve drank enough that I’m going to be sick and puke, but I haven’t drank anything.  Being nauseated for hours a day isn’t something I’d wish on anyone.

I’ve read up a ton on what is going on with me.  I like to think, and I’ve been told by my doctors, is that I’m going to be fine, eventually.  But my eventually is way quicker than what is currently going on.

I didn’t do anything yesterday that I think should have made me feel so bad for close to 12 hours now, and counting.  At least something that I know about right now. Maybe I will eventually figure it out, I haven’t yet.

I have an ear doctor’s appointment this afternoon.  I have a lot of questions to ask him.  I’m hoping to feel a tad better before that or it is going to be a challenge.  Just sitting in a car has been pretty bad most of the time.  I don’t drive. That will be a big improvement.

Anyway, I need to finish this, I don’t feel good.  I’m not scared of dying.  I know I am going to die. I know that just over a month ago, I could have easily died.  But I learned that wouldn’t have been painful.  I would have just been out doing what I love, riding my bike and then, poof, I’m gone. Of course that would sadden a lot of different people, but humans do die.

This is a little different though.  I hope to get a lot better.  I always thought this recovery was going to be a little challenging, just because of how I feel.  But that I’d eventually be back up to speed.  I never anticipated these setbacks.

Maybe I didn’t get to an article that covered them or something.  I don’t like them.  Laying around for over 20 hours a day doesn’t suit me.  Laying around feeling awful is even worse.  I would like to think that days like yesterday are going to be less and less.  And that it doesn’t continue today.  But, obviously, I don’t know squat about this. I probably won’t until it is all over. 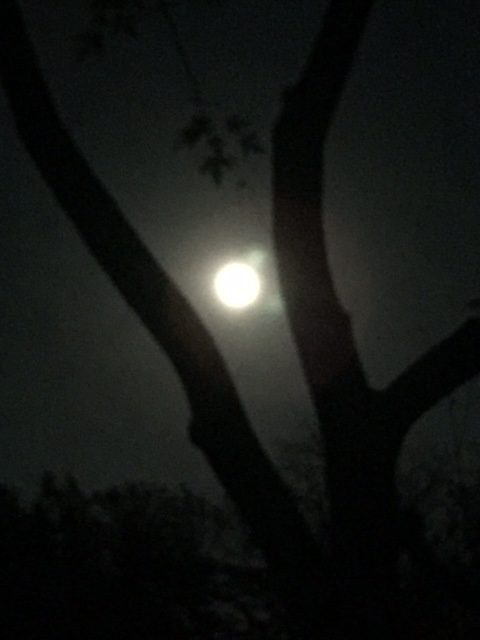 The super moon was a highlight of the night yesterday. If you didn’t get a chance to see it, it you can still go out tonight and it will be impressive. It won’t be this big again until 2034, so it will be a while. 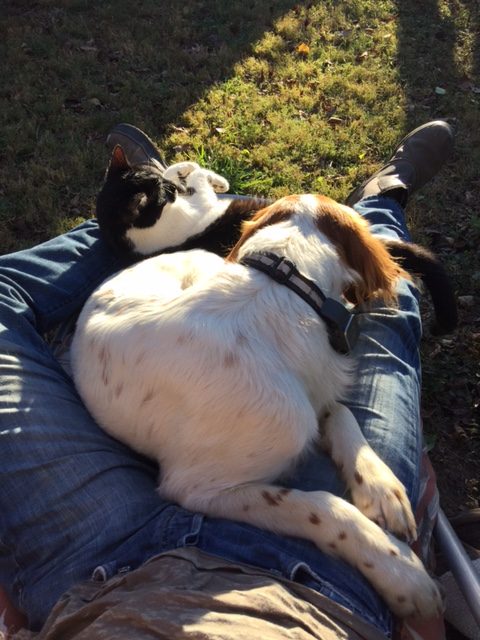 I’ve been trying to lay outside as much as possible. Tucker is always game. And usually at least one cat. It is nice.

29 thoughts on “Thinking about Dying”