Hi guys.  I finally opened my computer to try to write a post, so bare with me.  I’m not so cognizant for very long periods, so I kind of loose focus, or thought process pretty easily right now.

It’s been 8 days since I crashed and smashed my skull. I can’t seem to understand if it has only been a day or two or a month.  It has been neither, but the time is moving so slowly, even though I don’t remember a lot of it.

I haven’t really talked to Jack or Kris,, the two guys that didn’t fall with Bill and I, so I’m not exactly sure what happened.  I know I hit a dog and then Bill ran into me from behind.  We were towards the end of an evening training ride, so were going pretty quickly, over 30 mph.  I don’t think I hit the brakes at all, so I guess all my forward speed was transferred to the ground.  I don’t remember anything.  I do remember asking Bill if he was okay when we were in the ambulance, going to the hospital, but I don’t remember what he said back.

I was in intensive care for the first day or two and don’t have any recollection of that either. Stacie, my friend and an orthopedic surgeon, from Louisville, got on a plane and flew to Topeka. She slept in my room with me for two days and was really the biggest part of me improving quickly, even though to me, it  seems, I’m still at square one.

My skull if pretty fractured.  I have taken a bunch of CAT scans and am not really sure exactly where it is broken.  I know my skull is fracture on the top, but again behind the right ear.  So, the pressure in my head if really high, thus, pretty crazy headaches continually.  I’ve never experienced headaches like this.  It is barely survivable.

I was in the hospital until Tuesday or Wednesday, I’m not sure.  Bill was there for 3 days.   He broke a bunch of ribs and collapsed his lung, which needed to be reinflated.  He came by and visited when he was leaving.

I didn’t really sleep or eat in the hospital.  I think I ate a bowl of oatmeal, some mashed potatoes, and that was it for 5 days.  I was sleeping maybe an hour a night.  These super sharp headaches pretty much limited any chance of sleeping at all.

I was home for a day and then had to go back to the emergency room again.  I spend 1/2 a day at the hospital, more CAT scans, blood tests, etc.  I was doing alright, I guess.  The pressure is acceptable and headaches are about the same.    I went to the ear, nose, and throat doctor yesterday and he said that I have a bunch of blood behind my eardrums, that should leave as the swelling goes away.  I pretty much can’t hear at all out of my left ear, some out of my right.

I’ve been sleeping a couple hours a night the last two nights.  I have over 700 emails, which I can’t really read.  My right eye is really cloudy, from back pressure, so I’m waiting for that to work a bit better before trying to answer the email.   I had a flight to go out to LA this weekend to hang with my friend Seth Davidson, who is doing the South Bay Cycling Awards tonight.  I’m bumming I’m missing that.  Plus, Berryman MTB Epic is going on right now South of St. Louis.  It’s a bad time to be out of commission.

Okay, that is about it from here.  Supposedly I can’t ride my bike for over 4 weeks.   It was originally 8 weeks, but I negotiated it in half.  We’ll see how how that goes.  I can barely walk, I’m really wobbly.  This might be slow going for a while. 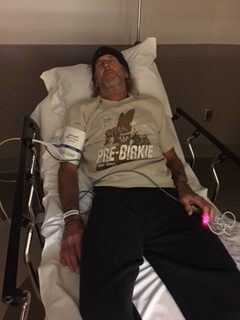 Back at the hospital. 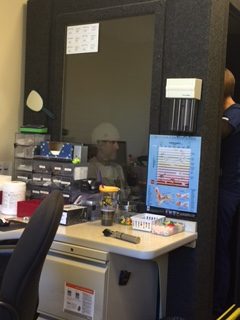 Getting my hearing checked. I couldn’t hear shit. 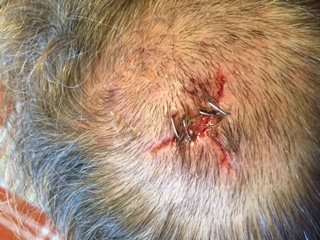 The put a bunch of staples in. I’m not sure when those or getting removed.