I drove from Cable to Topeka yesterday.  I was driving Dennis’ old Dodge pickup, old?  a 2001, and it took a lot of concentration.  Man, does rust do a number on automobiles.  The drive took a ton of concentration and I was beat when I got home around 1 am.  Added to the tension was I was threading thunderstorms all the way from Minneapolis to nearly home, which was close to 8 hours.

There is so much “news” in our sport.

I guess first is that the Tom Danielson “new” doping story has ended.  At least for 4 years. USADA gave Tom a 4 year ban instead of 8 years.  I thought the deal was 4 years for the first doping positive and a lifetime ban for the 2nd, but I must be wrong.   I’ve written enough about my views on Tom.    Tom is going to hang around for a while.  Maybe forever.  (See tweet below.)  I think he views this USADA ruling as a win.  I see it as another example of unfairness.  I don’t think it is a happenstance that a guy that never got caught for doping, other than having to testify about doing it, gets caught up in an accidental ingestion deal.  It stinks.

Ryder Hesjedal is gone too.  He is leaving the door open for maybe racing still, I guess. Cyclingnews did a “last” interview with the guy.  It stunk too.  They threw him softballs and only asked him once about doping, which he really didn’t answer.  Honestly, I would rather have the dude racing at the World Tour level than running into him at some local MTB at Whistler on out riding on Haleakala.

USAC is jumping into the fixed gear road racing category.  I’m not sure this is a good thing for USAC, but the racing looks like a blast.  It kind of reminds me of Fatboy racing on MTBs.  They are starting their sanctioning at the Red Bull Last Stand in San Antonio next weekend.  The promoter of the event is Ravi Rajcooma.  Ravi and I go way back and he was really involved in the Fatboy racing, so he might have gotten the idea from that.  Ravi is a forward thinking guy, so I bet the race is out-of-the- box thinking.

I would like to try some of this racing, but I don’t think I’m very well suited for it.  But, who cares. I have a 1972 Schwinn Paramount track bike that has never been used for anything but roller racing.  I know that bike wouldn’t work for this, but I guess I could go out and ride it a few times to try to understand what it takes.  Probably won’t happen.

I’m thinking about racing a local MTB race this weekend, The Tour de Lizard.   I did this race right after we got Bromont, so it was 12 years ago.  I don’t remember the course much, other than it had some technical sections.  I think it would be a perfect race from my dual suspension bike.  I need to get that out on the trails more this fall.

Okay, my neck and shoulders are wasted from driving tense yesterday.  Maybe that is good training from MTB racing?  Probably not. 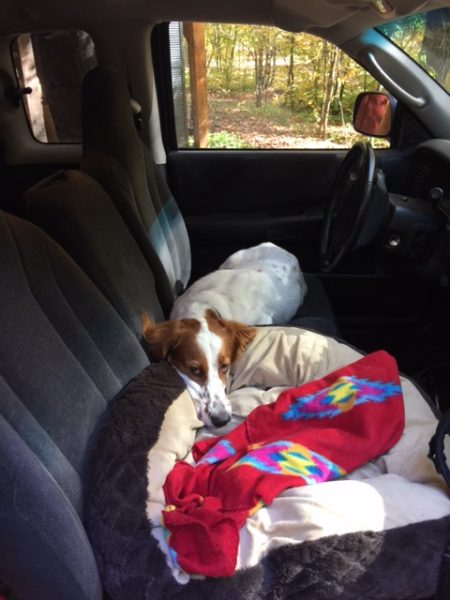 Tucker wasn’t very stressed out. He pretty much slept the whole 12 hours.