As an athlete, sickness is part of the business.  I don’t think that all athletes are hypochondriacs, but most good athletes I know spend a fair amount of mental capacity trying to stay well.

I’ve probably raced sick more than any other person I can think of.  That is mainly because I’ve raced more than about anyone I know.  Both by duration and frequency.

I don’t much like racing full-on sick.  It isn’t fun.  But I’ve really surprised myself a few times, which is always a gift in sport.  Positive surprises are what makes athletes move to higher levels.

One thing about pretty much riding for myself is that no one is forcing me to do about anything. That is a good thing, most of the time, but sometimes you need some help, some outside influences, to nudge you into a certain direction.  When you feel a certain responsibility to teammates, sponsors and such, you never want to let them down, so you nearly always toe the line.

But riding off-road, when team tactics are minimal, at best, justifying racing sick, or even sub-par, gets harder and harder.

What always sways my decision making process is my past experiences of doing nearly the exact some thing before.  I could count on one hand, half of one hand, how many times I regret starting a race sick.  But I can list tons of times where I had positive surprises, super life memories, feeling exactly the same.

I am pretty positive that racing sick doesn’t make you any sicker.  If anything, racing sick can be the catalyst to getting well very quick.  I’ve never got well quicker than a few times I fell ill during a stage race.  Sickness that would normally hang around for a week or two, is over in two or three days, while racing 4+ hours a day.

I’ve won a couple big events sick.  I won a stage of the Biltmore Stage race, a hard race in the rain at the Biltmore estates in Asheville, NC.  I was last guy on until the last lap.  I rode away on a slick descent and then held the lead to the finish.  I beat some pretty great riders that day.   The next day I was well.

I won a Fatboy criterium at Sea Otter, over a decade ago, the day after going to a clinic and getting diagnosed with strep throat.  I had a Zpak antibiotics bottle in my pocket going to the race, but once I take one of those, my racing ability is done.  I won the one hour race, easily, ate the antibiotics and started the drive home.

That isn’t going to happen here in Chequamegon.  I’m not sure exactly what happened, initially I thought it was food poisoning, but now I’m thinking stomach flu or something.  It seems to be lingering on this whole week, I’m not really feeling much better.  I’m not physically ill, like violently ill like initially, I just feel weak and crummy.  This will be the shortest week I’ve ridden this whole year, which isn’t a big deal.  But my power level is pitiful.

And having no power in Chequamegon isn’t good.  I seem to be able to ride off my seat respectable, at least compared to being seated, but that ain’t gonna be enough.

No matter, Chequamegon is a good race to participate in subpar.  I’ve had a blast riding the race after flatting.  There are 3000 other people to interact with.  I’m planning right now on just riding with Catherine tomorrow.  There are definitely lots of advantages to having someone to draft out there.  The majority of the race is on access roads, which are logging roads, snowmobile or atv trails, and such.  There is only around 8 miles of riding on the Birkie Trail, where drafting isn’t that great.  But having someone pacing you, especially someone better, helps immensely.

No matter what happens tomorrow, it is going to be a life experience.  Just listening to my friends tell their race stories is super.  It is going to rain all day today, at least this afternoon, but the soil here absorbs a ton of water, so that isn’t going to be much of an issue.  It might make the FIretower Climb a little trickier, but that is fine.  Tomorrow looks alright as of now.  Okay, back to bed for a bit. 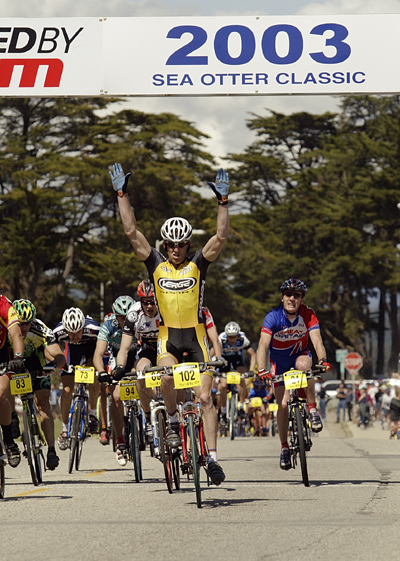 Fatboy at Sea Otter. I was away most of the race in various breaks, but it ended up a field sprint, which was a piece of cake that day. 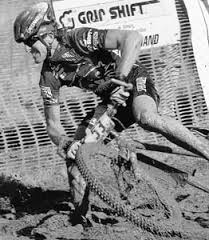 I was looking for the Fatboy photo and saw this one. It is one of my all time favorites. Sea Otter, once again. I was winning overall. This was the dirt criterium, which was really a mudfest. Lots of great photos from that event. 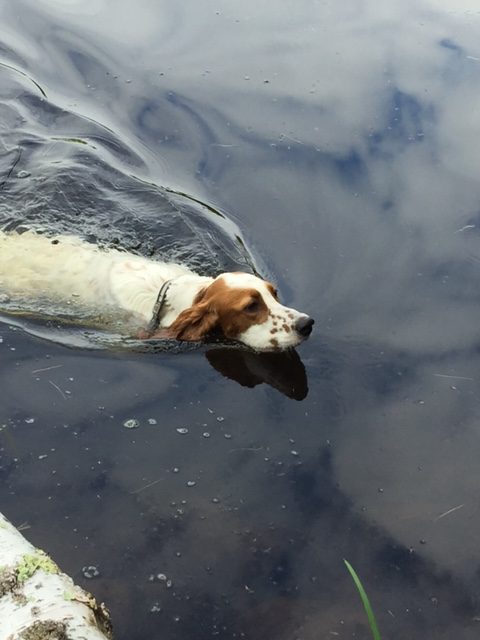 Tucker is a swimming fool. He runs to the lake, a couple times, on his own, to go swimming.