I’ve been coming up to Cable Wisconsin for a really long time.  Nearly half my lifetime.  It doesn’t seem that long, which, when I think about it, is kind of depressing when I project the time into the future.  Dave Flaten, who finished 2nd last year emailed me about the race, so I thought I’d jot down semi-history from my perspective.

I first came through here on kind of a detour.  I was skiing a cross country ski marathon in Duluth and we ended up driving back through Seeley to have dinner at the Sawmill Saloon. That was my first time and it started from there.

I skied up in Cable for a few years before I came to race.  I actually sent Catherine Walberg up a year before I came and she won.  She said the race was super and I should go race it.

I had heard about Chequamegon, mainly because Greg Lemond raced and won it a couple times.  But I was a bike racer and it was thought of as a tour that a couple guys raced.  Even Lemond didn’t get the respect from the cycling community.  We were all naive.

When the first official MTB World Championships were held in Durango, I was there, finished somewhere in the top 20, maybe 18th, and when I was driving back to Boulder, where I lived, I stopped in Denver to get a paper to see if there was an article about the Worlds.  Instead there was an article about Greg Lemond winning the biggest MTB race in the world, Chequamegon.  I was thinking how screwed up that was.

I’m not sure why I first came up here.  It must have been an open weekend and I’d made a ton of friends by skiing the Birkie.  Anyway, my first year was 1997.  I didn’t pre-ride any of the course back then.  Just kind of a show and go.

Marty Jemison, who rode on the road for USPS, won the race.  He won it that year and the next.  I’m not too big on professional road riders that are doping to come cherry pick MTB races, such as Lance, Levis and Marty.  So I can’t really sign off on Marty’s wins.  He is a nice guy, but beating up on Dave Wiens, Rishi and I, while doping, seems pretty deplorable now. (See Tyler Hamilton’s book, The Secret Race, page 56, where Marty admits starting using EPO in June of ’97.)  Anyway, a bunch of better MTB racers started coming just about the same time, so the door was open and the stakes got higher.

The course back then was way, way different than it is now.  I’d say the race approached a real MTB race sometimes then.  Don’t get me wrong, the course still had the 10-15 miles of Birkie ski trail, but the other “roads” were unmaintained roads, which means super rocky and technical. Climbs that you had to pick your line and could drop guys on.  That isn’t the case now.

The lead vehicle was a motorcycle back then.  So there was actual singletrack on the Martel’s pothole section.  Then quads started using the trails for access and that was gone.  There was singletrack again, for about 4 minutes, two years ago, but that isn’t there now, so the whole course is pretty open.

The course has gotten faster and faster.  I won the race a couple times in the teen’s + two hours.  Now the winning times are all approaching the 2 hour mark.  That is because the trails have turned into maintained roads now.  It is still hard, but fast and hard.

The part of the course, that has stayed the most consistent, is the Seeley Fire Tower climb to the end of the BIrkie Trail section.  This is about a 4-5 mile section that is very selective.  It is super hard climbing and unrelenting.  The race has been decided here most years.  It would be hard for this to change much, so that is a good thing.

I’m not sure how many riders actually do the long course now.  SInce Lifetime Fitness took over the event, I think there are maybe 1000 more riders let in to race, but I don’t know that number. I think it is around 3500, but I could be off.  Whatever the number, there are a lot of bike riders rolling out of Hayward  together.

The start is the most stressful part of the race for most people.  It doesn’t bother me much.  A huge mass rolls out of town, slowly for the first bit, the full off for a couple miles on Hwy 77, until you do a turn onto Rosie’s Field.  It is 30 + mph, everyone pretty spun out.

The issue is that you have your hands stuck on these super wide bars and that you can’t really protect your cockpit like you can on a rode bike.  That, plus there are a lot of riders that are pretty unfamiliar riding in such close quarters at such high speeds.  There have been some pretty crazy crashes at the start before.  Never at the very front, except one year Gene Oberpriller turfed it pretty hard on a tandem, at the front.  But other than that, it has been relatively safe.

I can’t really do a quasi history without mentioning Gary Crandall, aka The Fatman, who directs the events at Chequamegon.  Gary is a super rider friendly promoter.  And area friendly.  He sometimes spent more time volunteering at other events than promoting his own.  He knows everyone in the surrounding community and is a go-to guy here.  The real success of Chequamegon is because of Gary Crandall.  He was inducted into the MTB Hall of Fame in 2003. Very well deserved.

This race has been going on since 1983.  Dennis Kruse, who is a great friend, has done everyone of them.  One of 2 remaining guys.  Dennis just told me that in 1983, he got an award for being the oldest participate.  Crazy.  Gary Crandall raced the event that year.

Okay, this is rambling.  I love this race, even though I’m thoroughly depressed about my prospects on Saturday.  I have met a ton of great friends here and have tons of great memories already.  No matter what happens, it is going to be a life memory day, which is what I try to collect. 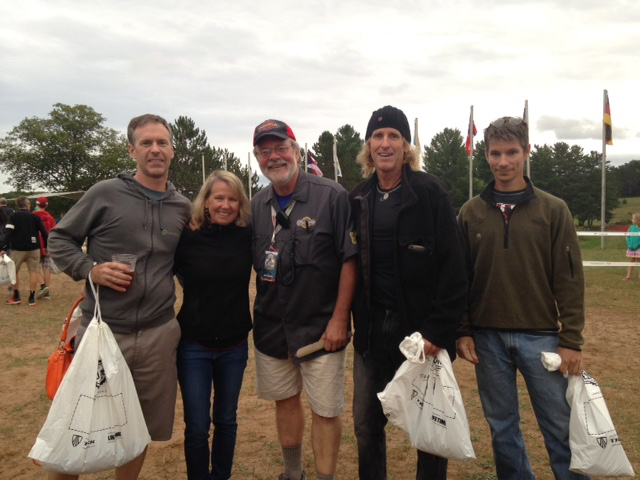 The Fatman and the Kansas gang last year at Chequamegon sign-in. 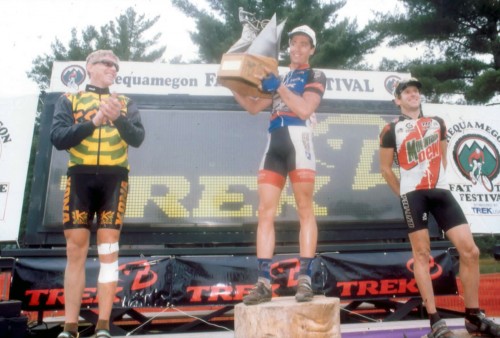 Dave, Marty and I at my first Chequamegon.

The start in Hayward. 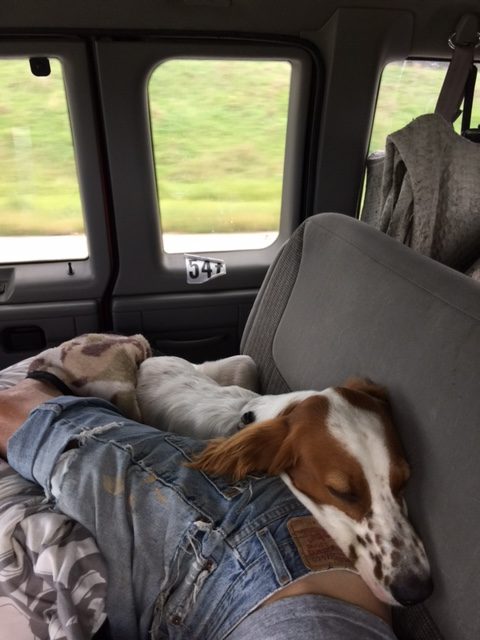 Tucker was pretty clingy when Bill was driving up to Cable a couple days ago.

26 thoughts on “My History with Chequamegon”