Yesterday, it was supposed to rain some or most of the day.  It rained some the night before.  It was a good time to mow.  Karl, my friend from Louisville, told me that he always mows early in the morning when there is dew or after it rains, so it isn’t dusty and he doesn’t get clogged up.

Kris usually mows, but since he crashed and semi-destroyed himself, he’s off that program, so I’ve been around and doing it.

I’m heading out of town for Chequamegon and then Jinglecross, so am not going to be around for a while.  Thus, everything has to be mowed short.

We never seem to have a mower that just works.  Like you pull the cord and it starts. Something always has to be done for it to run.  You have to know that something or you’ll never get the mower started and keep running.

That is until Kris actually bought a new mower a couple weeks ago.  It was a junky new mower, but new, none-the-less.  It had been returned and needed about 5 minutes of repair to run like new.  Junky mowers, running like new, aren’t something to brag about.

But this one worked alright.  You just had to push the primer bulb a couple times and pull the cord once and it started.  I was pretty stoked with that.

The only good thing about cheap mowers is that they don’t weight much.  They are easy to lift in and out of the van.  I have to do that 4 or 5 times, depending upon how much I mow.

Anyway, I started a little late, after noon, and had three places to mow.  The first one went fine.  Kris usually cuts all the corners he can, so when I do it, I have to spend a fair amount of time doing the whole thing.  I understand his thought process, but don’t agree with it.  I like to do a good/complete job every time I do the job.

Anyway, I went over to this house in Central Topeka. Central Topeka isn’t the best part of town. I have owned the house since the mid 80’s.  I bought it because of a tax audit.  The IRS decided that I didn’t have a tax home since I lived with my grandmother, so I just bought a house and that was that.   It has pretty much sat empty most of the time.  I had a friend that worked at the bike shop live there for close to 10 years, but scared him off when I tried to sell it to him too cheap.  Not sure why that was.

Anyway, it is a really nice house, just in the wrong place.  Anyway, I mowed the front and then went to the back.  I hate mowing the backyard because there is some plant there, I’m not sure what it is, but when you mow, just in once place, it puts out a vapor that is nearly choking. Something like if you would be chopping onions except way more intense.  I skipped mowing the backyard last week when I mowed, so I had to be done.

I got about 1/3 the way through the back when I hit a small stump or a bush that had been cut off.  The mower just stopped, which isn’t that unusual.  What was unusual is that oil started pouring out on the deck.  Like running out in a stream.  I was pretty sure the crankcase was cracked.  I didn’t try to restart it.

I decided to finish the rest of the yard with the weed trimmer.  I had just rebuild a Honda trimmer and it is working so/so.  I put a new carburetor on it, but it is still running kind of weird. It has a fuel issue.  As you change the angle of the trimmer, it stalls sometimes.  I put a new fuel line in and thought maybe it was too long.  It has a filter and thought it was maybe getting stuck at the top of the tank, so I shortened the gas line a little.  That really didn’t fix it.  Maybe I just bought too cheap of a carburetor, but I needed it fast.

Anyway, I finished the back yard with the trimmer.  You’d be surprised, it didn’t look that bad.

I own 13 acres in South Central Topeka.  It isn’t as impressive as it sounds.  Same deal, I was looking for a home for my mom a while ago and sent my brother to a tax auction with a blank check. Kris calls and said he didn’t buy the house but bought this land, sight unseen.  It was a mess.  Bill, Trudi and I removed over 4000 tires from the land one summer.  It was a very bad job.  It had a railroad car and a couple semis parked there.  We cut them apart with a cutting torch and sold them for scrap.  Another really bad job.

So, I needed to mow along the street.  It is about one city block long, but half of it is a rock cliff, so it doesn’t need to be mowed.  The other half is just about 8 feet, but the 1/2 block, so isn’t much.  I just kept using the weed trimmer.  It is amazing how much trash is over there.  I go by pretty often and fill garbage bags.  I don’t get it really.  I don’t really know anyone that litters, like throws stuff out of a car window.  I don’t see it that often.  But it must be common or all the trash laying around wouldn’t be there.

Anyway, I’m pretty much done and am using a blower to blow the cut grass back out of the street onto the grass. (On a side note,  It is mor than annoyed when people mow their yards into the street and leave the grass in the street.  Where do they think it goes?  Do they think it just disappears?  I wonder if they realize that most of it ends up in the sewer and clogs it up. Then it runs to the river and clogs it up. If they just mowed with the grass going back towards their yard, it was decompose, it is good for the grass and doesn’t look like shit, plus doesn’t wash into our streams.)

I am blowing the grass when I see a young kid riding a MTB towards me.  I keep blowing and realize he never rode by.  I look over my shoulder and he is walking behind me, like really close. He acts like he wants to talk to me.

I turn off the blower and can’t really understand a word he is saying.  The only think I understand is the word bible.  I tell him I don’t know what he is saying and he says something about bible study.  I’m thinking he need some money or something, but am not sure what he is asking.

I say once again, I’m not sure what you’re saying.  He said in a weird accent, like Caribbean or East Indian, that he is going to bible study and wants to know if I want to come with him?   I tell him I am a little messy for that.  I have sweated thru my shirt and jeans and am covered with grass clippings.  I am a mess.  Then he asked if I want to pray with him.  I told him that I was good.

He got back on his bike and rode off.  I said bye.  It was a pretty interesting conversation.

So, everything is sort of mowed.  Cut at least.  The grass shouldn’t be growing that much now, but it has been raining all the time.  There are these oak mites around that are horrible.  They bite you everywhere.  We have two huge Oak trees in our front yard.  They have been there forever.  I have never even heard of oak mites and now they are everywhere.  They were here last year and back this year.  I don’t get it.  It makes being outside pretty awful.

Okay, working on cross bikes.  I glued a couple FMB tires on last night.  It took half a can of Vittoria glue.  I’m not sure what tires are best for Jinglecross in September.  When using tubulars, you are pretty much stuck with what you have on your wheels.  That is the only disadvantage of tubular compared to clinchers.  FMB’s work pretty good in all conditions.  I’m not all that much into file tread.  Especially on a course that has a sketchy downhill like in Iowa City.  But, it could be super dry and they would work fine.  I guess we’ll find out in a couple weeks. 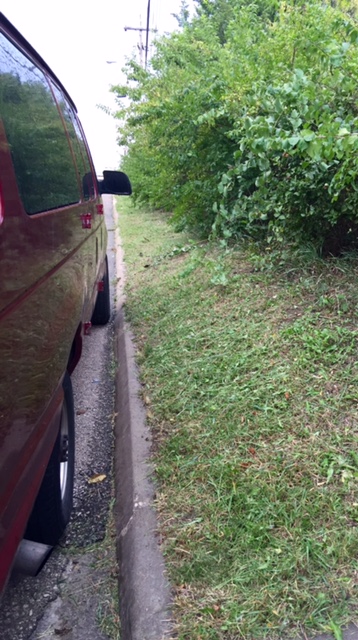 The weed trimmer cuts it pretty short. The bushes look like they need to be trimmed too. 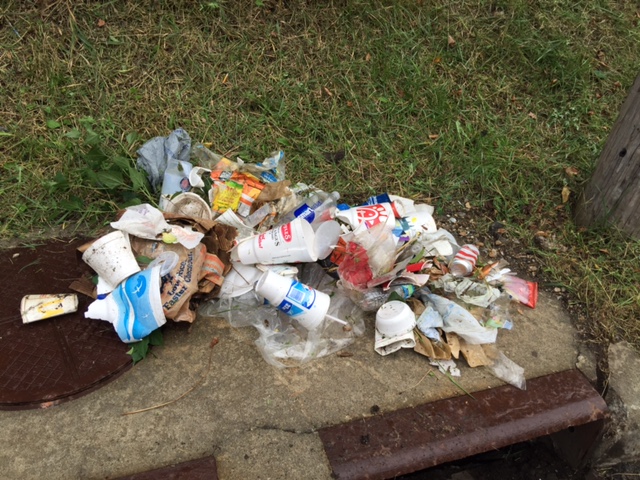 Picking up other people’s trash is creepy. 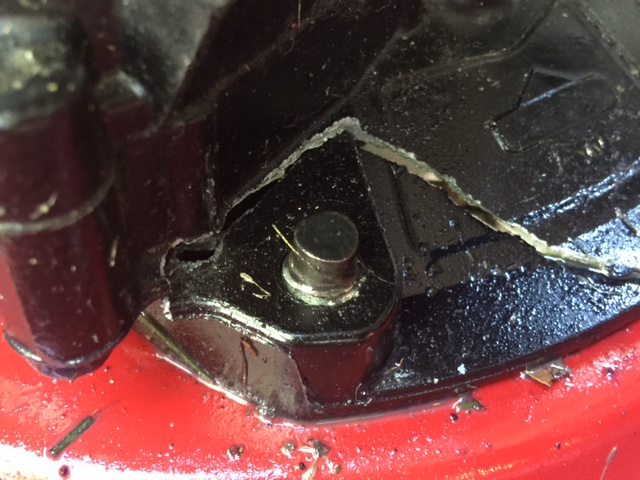 Broken mower piece. These Briggs and Stratton engines are made out of very bad materials.  The piece is $56 at Amazon. 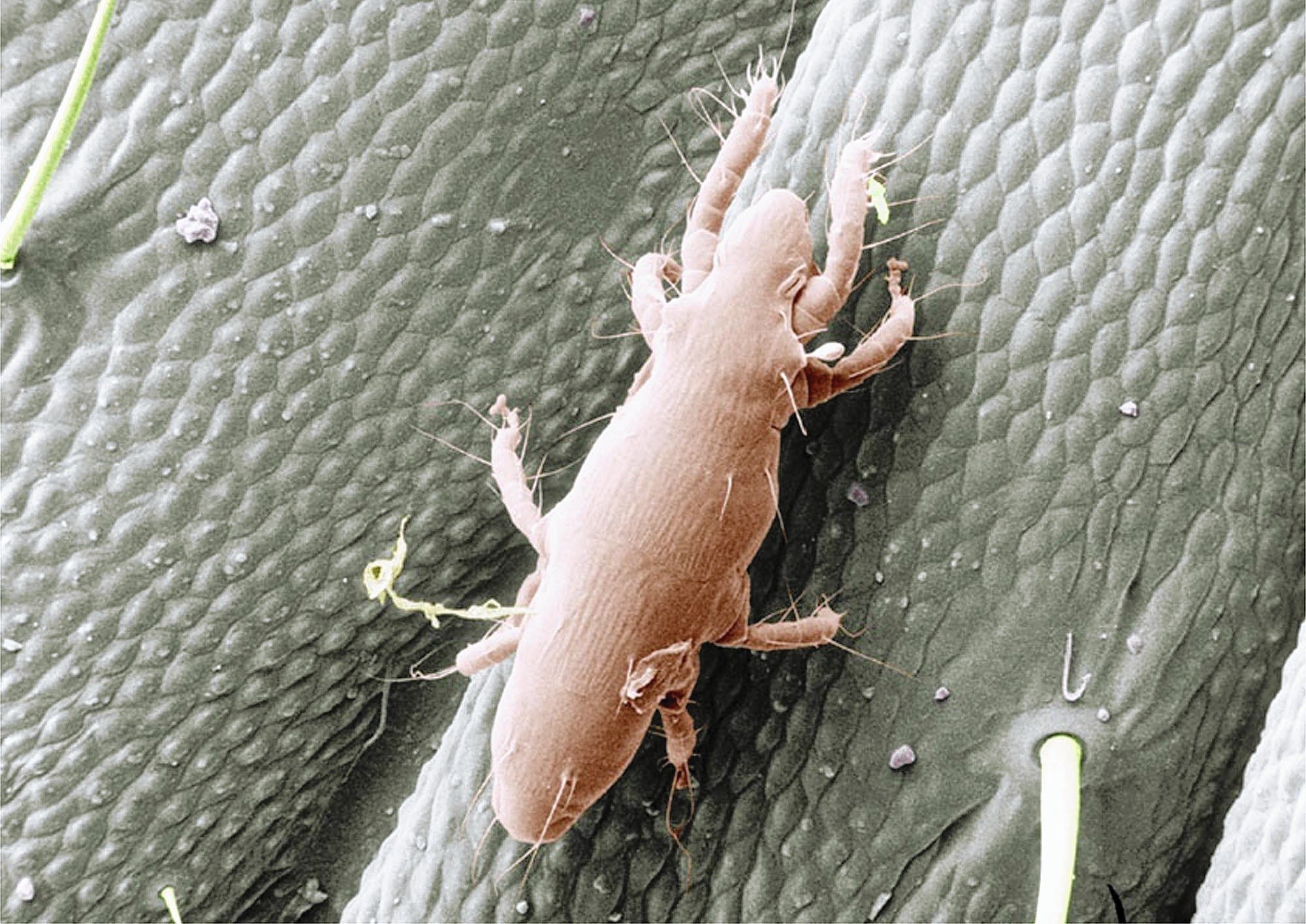 This is an oak mite. It sort of looks like a tardigrade. 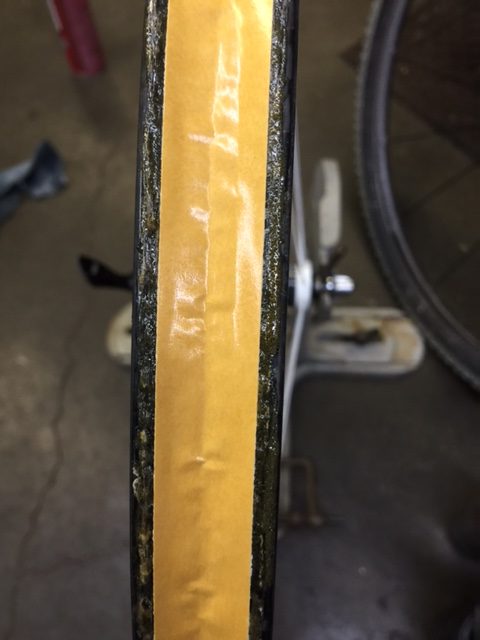 The Belgian tape is hardly wide enough for these super wide rims. I’m hoping they keep the tires from folding over with way lower pressure. 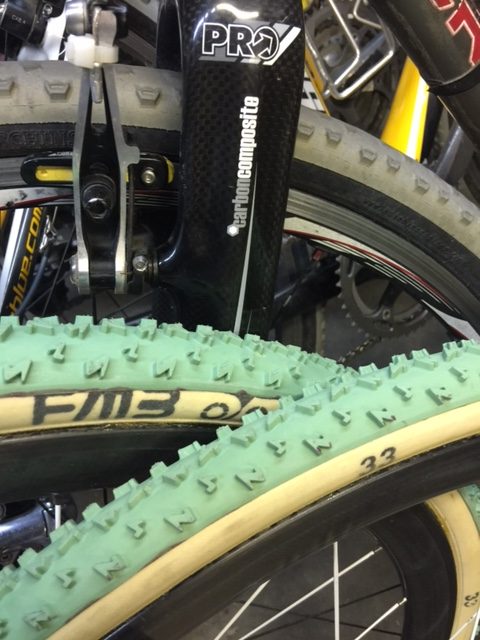 These tires have a lot of tread, but I figure it is better to have too much tread than not enough, Belgianwerks has a whole selection of FMB cross tires. 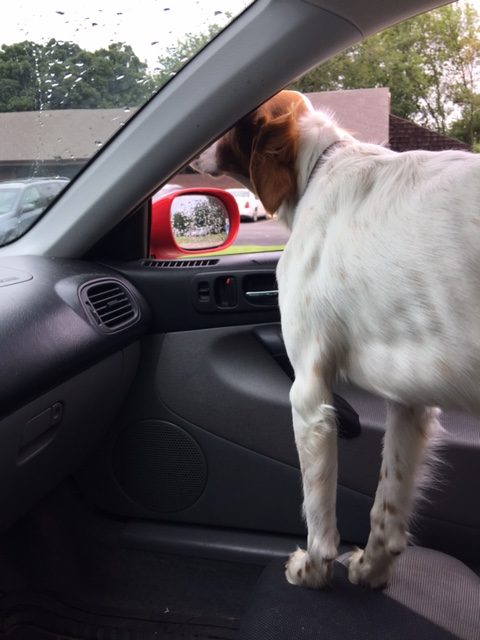 One of the very few times that Tucker is acting like he is concerned where we are going.

23 thoughts on “Mowing before Leaving”