Man, could anyone have predicted the finishes of the men’s and women’s Olympic Road Races. That was crazy and exciting bike racing.   Many would argue for Paris-Roubaix or the World Championships, but in reality, the Olympics have finally become the single most prestigious one day race in cycling.  It took a while.

There was a lot of heartbreak left out there on the road.  I didn’t watch the men’s road race, except for the final bit, but I did see the last hour or so of the women’s race.  But from reading about the men’s finish, then watching the women’s end, it is apparent that the descent really decided the results.

I’m not knocking anyone’s ability level here.   There were some riders that had pretty good descending credentials that didn’t finish the races.

If you look at the final groups heading down the final descent, 3 men and then 2 women.  In reality, 4 medals were lost out of the 5 riders.  In the women’s race, Annemiek van Vleuten, from Holland, had the race won.  That is if she could have managed to not crash.  And she crashed dramatically.  She had disposed of Mara Abbott (USA) nearly the second the road started down.

The road was a little wet and Van Vleuten rear wheel did a minor slide.  It put her into a trajectory that pointed her straight into a narly curb.  She must have tapped her front brake because she was instantly high-sided over the bars, landing head first into that very curb.  It was not good at all.

Mara was overly caution, and it cost her too.  I say that, but look what happened to Annemiek. She had over a minute at the top of the descent and lost 30 seconds to the 3 chasers going down.  She only needed less than 5 seconds at the finish to have a gold medal in her pocket.  It was an unbelievable ride, but not to be.

In the men’s race, 2 out of 3 of the leaders crashed.  Sergio Henao (Colombia), and Vincenzo Nibali (Italy), both, most likely, would have won medals, but crashed so close to the finish. Nibali has historically be known as a super fast descender, but he had some issues in the rain at the Tour last month.  And he had a huge issue in Rio.

Like I said above, falling on that descent wasn’t something to be ashamed of.  It could have been no ones fault, just your tire hit the wrong 1 cm square of pavement.  But it is strange that one section of a course could decide so many Olympic medals and riders careers. 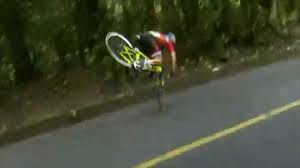 This isn’t for the faint hearted to watch.  If that isn’t you, then skip to about 1:40 in the video to see the crash from a different angle.