I’ve taken a lot of shit over the years about being from Kansas.  When I was a junior, most of the other riders on the national team had never been to Kansas and thought of it as I thought of Alabama or something.  Everyone has their own visions of their Kansas.  I used to tell them that there was only one paved road and one stop light.  And they believed me.

Then after I won the first MTB National Championships, they would call me to the line and say I was from Topeka Kansas and they spectators would crane their necks with audibly chuckles.  I could hear the comments about how a guy from Kansas could ride mountain bikes.  I guess they think it is flat?

Anyway, cycling in Eastern Kansas has been pretty successful, at least since I’ve been racing.  We produced some pretty incredible riders over the years.  Two guys that have raced in the Olympic Games, Marc Thompson and Nathan Sheafor, from Topeka.  Lots of National Championships in multiple disciplines, etc.  Back when I wasn’t a Pro, at one time there were three riders from the state of Kansas on the US National Road team, out of 12.  It was me, Nathan Sheafor and Scott Moniger.  I think there were just a few more than 150 licensed riders in the state then.  Pretty high percentage.

We have some stellar races here too.  The Tour of Kansas City has been going on for over 50 years.  It used to be an Olympic Development Race, which is equivalent to a NRC race now. Lawrence Kansas has promoted great races too.  The KU Criterium, was an Olympic Development race back then too.  Now the Tour of Lawrence, which is amazing.  If you get a chance next year, you should try to attend.  All the categories have a great prize lists and the courses are excellent.

Anyway, we have a pretty good group of elite level riders right now too.  There are a bunch of young guys that are riding pretty fast and it is fun watching them progress.

That is pretty much what I did yesterday at the Tour of Lawrence, watch.  It was muggy hot, like crazy muggy hot.  The crit was 75 minutes and everyone was dragging.  Everyone except Joseph Schmalz.  Joseph won the race again, like he did the day before.  He lapped the field with Alex Hoehn, who is from Kansas too, and a few others.  Alex was 2nd at the Tour of Gila, Cat 1/2, and is riding stellar this season.

I rode better than I had anticipated.  I was shit, but it could have been worse.  I was hot, but I didn’t melt.  I ended up finishing 16th, but at least I finished.  If I wouldn’t have a couple mistakes, I might have finished in the top 10.  But when you’re at you limit, mistakes come fast and easy.

Alex and Joseph are heading off to the Cascade Cycling Classic in Bend today.  It is a good time for them to bug out.  The weather is going to be extremely hot this whole week.

Trudi is flying back from Europe tonight.  She was supposed to come back tomorrow, but got her ticket changed to today.  She only has a handful of days back, having to head to California to prepare for the Tour of Utah.

Okay, guess I’m doing heat training all week.  Last week was the least I’ve ridden since January 1st, and I’m thinking of repeating that again.  This virus thing is hanging on.  I hate being sick in the summer. 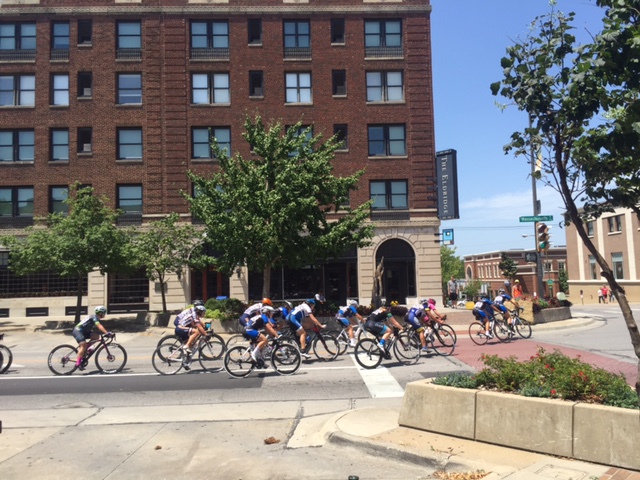 The women racing in front of the historic Eldridge Hotel in downtown Lawrence. 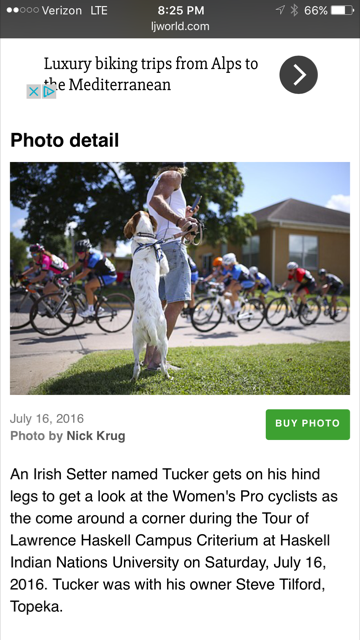 Tucker and I made the Lawrence Journal World from Saturday.  Tucker is an English Setter though. 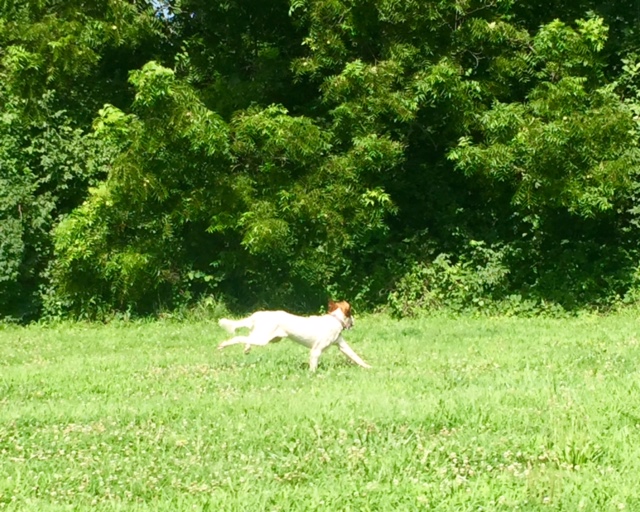 Tucker isn’t much into the heat either. He looks like he is flying here.

28 thoughts on “Cycling in Kansas”