I can’t help but comment on yesterday’s Mount Ventoux finish, again.   We’ll be talking about it for a long while.  I can’t think of a more bazaar deal I have ever witnessed in cycling.  And I’ve seen some pretty crazy shit.

Obviously, what made it completely nuts was Chris Froome running up the climb in his cleats.  I have to assume he had lost his mind temporarily and just panicked.  There is no other explanation. I think every professional cyclist knows you can’t proceed forward without your bicycle.  It is bike racing 101.

The weird part of the running was the guy actually looked better running, in his cycling shoes, than he does riding his bicycle in the very same shoes.  He has super form, plus the build for it. Maybe a 2nd career when he gets fed up with massacring his bicycle racing competition.

I’m not sure about the jury’s decision.  The 3 km rule doesn’t apply.  It would be a shame if the race was decided by that, but it did happen and there is no fair way to work it out.  Guys still got jipped by the jury not enforcing the rules.  When it is a no-win situation, somebody losing time/someone gaining, I say go with the rules.

Then there is now the deal with Nairo Quintana.  You probably haven’t heard this, but if you click here, you can see when all this mayhem was going on, Nairo just grabbed onto the wheel on the back of one of the support motorcycles and was coasting up the hill.  I can sort of understand Froome’s panic run deal, well, not really.  But, another bike racing 101 rule, you don’t hold onto vehicles going uphill in bike races.   Here is a link to one of the videos.

I have to say about this, kick the idiot out of the race.  You might say, just for holding onto a motorcycle for a few seconds to get around chaos?  No, for being such a moron that you think you are above the rest and that it isn’t going to be caught on video by one of the gazillion people standing on the course.  He’s going to get smeared today in the time trial, so at least there is that.

The race jury needs to watch the videos all over twitter, then boot the dude.  In this case, rules are rules.  No free ride up the Ventoux close to the last kilometer. Pretty easy one to understand.   Froome is hoofing it to the finish, while Nairo is chillin’.  What a weird day.

On a side note – I raced up that very climb the first time I went to Europe on the US National Team. I was racing the Tour of Vaucluse.  Robert Millar was killing it up the climbs.  I remember turning the bottom corner, next to another American, Jeff Pierce.  We thought we were climbing great and we hadn’t even gotten to the bottom of the climb.  At the top, the last 500 meters were so steep.  It took forever to get to the 200 meter sign.  If someone would have offered me a wheel at 200 meters, with a bigger cog in back, I would have stopped and taken it.  I was crawling.   I stayed on my bike the whole way.  I didn’t have to run at all.  And, I never held onto a vehicle.  Anyway, the climb is super hard and I’m glad I got to race up it once. 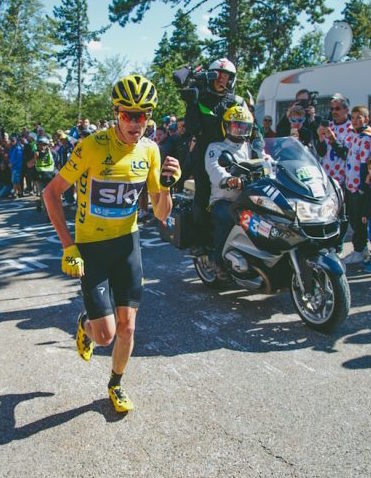 Pretty good form considering he already had 110 miles on his legs for the day. 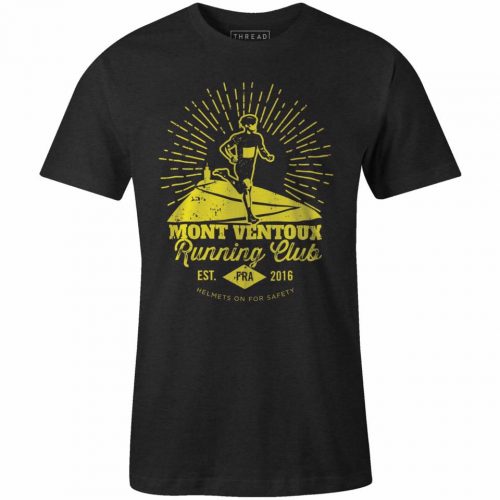 Maybe Chris is a member? 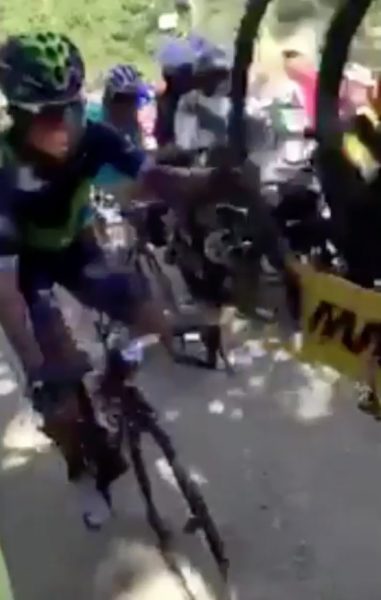 He wasn’t just trying to stay upright. He was definitely towing.. Watch the video at the link above.