The title of this post is a bit misleading.  It is only a 4 am start if you happen to be from the Pacific time zone.  Like all the riders from California, Oregon, Washington, plus a few more.  Just think about it, even if they only get up 2 1/2 hours before the start to eat, they are still waking up at 1:30 am their time to race.  What is up with that?  By the time most of you are have read this, I’ve, hopefully ridden 177km.

It is really an insult to the Elite riders starting them at such a crazy hour.  I’ve done just a handful of races that start this early.  Never a Nationals.  And all the events I’ve done, this early, have all been mass start events that start so early because some of the competitors are going to take 10 hours or more.

The U23 races are arguably the most prestigious here.   They scheduled the U23 men an appropriate start time, at noon tomorrow.  But, the U23 women are at 7am on Saturday morning.  WTF?  The Junior Women 13-14 are at noon.  Why is that?

The schedule could very well be so much more correct.  Like starting the 175 + Elite riders at some hour that is sane.

I drove nearly 80 miles yesterday to get my number.  That is because the registration to pick up numbers today opens at 6:30 and the race starts at 7.  The Elite rider right ahead of me in line was mad when he heard that a woman was picking up numbers for someone other than herself. That was supposed to be a no-no.   He said that he had to take an extra day off work to pick up his number.   An extra vacation day to get a number to race a bike.  At Elite Nationals. Go figure.  He said he was pretty grumpy.

I’m feeling a little grumpy myself.  Just because.  Mainly because I’m not going good.  I don’t think I’m horrible, but I am pretty sure I’m not nearly good enough.  But, I’ve been bad before and surprised myself, so I’m going to go through the motions and just see.   I’m going to try to get 3 hours into the race before I make any rash decisions.

I’m not sure if it is because of antibiotics that I’m taking for my tooth, which are working, thank god, or if I’m just in a funk, but something isn’t going right.

The course is pretty easy, really.  I’ve raced here before and it is all big ring.  I only rode one lap and it really is a big criterium course.  It will flow pretty good and should be fairly easy sitting in early.  I’m hoping anyway.  Sometimes after a few hours, I sometimes get going better.

There is a 40% chance of rain at 9am, which would be disastrous I believe.  There really aren’t many straight sections and not really any tight corners.  Just sweepers where guys will tend to overcook when it is wet.  Hopefully that holds off.

I just got up at 5, two hours before the race. I at something fast,  I’m heading to drink some coffee and then go over to the course to line up.  I’ll let you know how it goes. 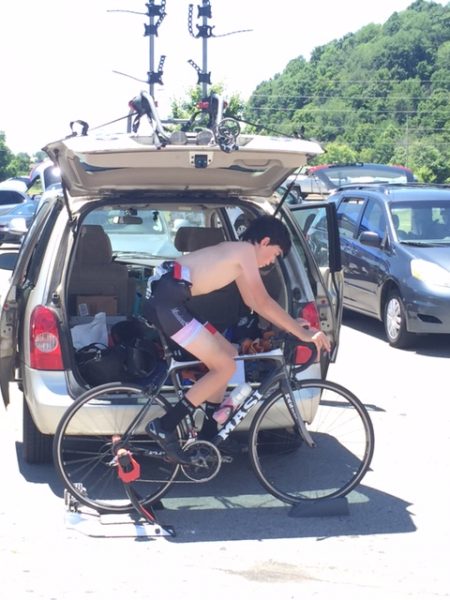 I saw this little guy warming up at the time trial yesterday afternoon. 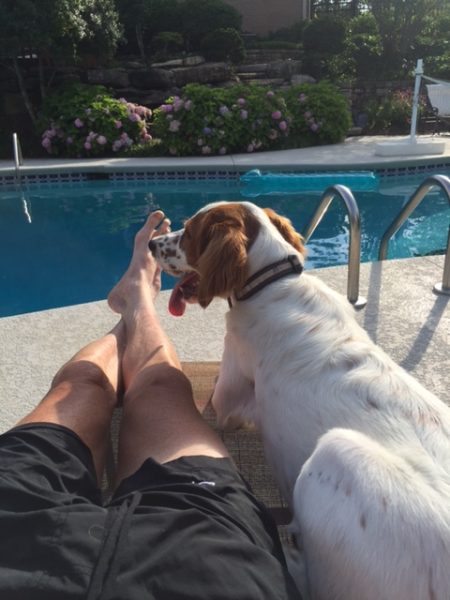 Tucker and I after a short ride yesterday.