It is funny how I hate being hot, then just a couple of days later, hate being cold.  I did that flip-flop the past couple days, being overheated in Tulsa, then yesterday getting caught it a storm and riding in the rain for over an hour at a little below 60.  Normally that wouldn’t have been that cold, but I guess I must have gotten used to, somewhat, the heat, because I was nearly shivering.

I’d rather be hot than cold.  Dealing with being real cold is difficult.  I think cold and heat effects our bodies seriously.  The after effects of each is semi-long term.

I wrote this article 9 years ago.  It was about the coldest I’ve ever been.  I still stick by it.

I’ve been asked a bunch what was the coldest I’ve ever been at a race. The ice dip at the UCICross race in KC (description below) wasn’t that cold. I was putting out an enormous amount of heat, riding so hard, so my hands got frozen solid, but my core was OK.

During the Tour of Bisbee, back in the 80’s when I was riding for Levis, it rained the whole 90 mile road race. The last hour it started sleeting. Roy Knickman and myself ended up finishing 1-2 in the stage and overall. When we finished, we sat huddled in the corner of a local bar, wrapped in wool blankets shivering for an hour. That was really cold.

But, the all time coldest I’ve ever been, by far, is when Outside Magazine came to the Sea Otter Classic to take a photo of me for an article they were doing.

We raced the “dirt” criterium at the raceway in the early afternoon Saturday. It was a flowing mass of mud. When I finished, the photographer from Outside, came and introduced himself. He said that I had the “look” he wanted right then. I was covered head to toe with mud. I said let’s do the shoot then. He said he needed the light at sunset, so I was supposed to meet him in 3 hours at the top of the hill at the race track.

I went back to the hotel, cleaned up and waited. I came back near sunset and rode around the crit. course for a few minutes to get “the look”. Then I rode up to the top of the hill to meet the gang. It was the photographer, his camera assistant guy, and a couple girls holding big light mattress things.

Anyway, the photographer said I didn’t have enough of the mud look, so asked the girls to get some fresh mud to enhance my look. That was the start of one of the worse hours of my life. Me standing there at the top of the Laguna Seca Race track having new mud and water throw on me every few minutes. It was in the upper 40’s and the wind was blowing about 20mph. I was completely done after 30 minutes, but the guy keep shooting more film. I finally gave the guy a five minute deadline. He told the girls that I was drying out. When the girl came over to spray me with water, she apologized. She said, “I’m freezing myself and I’m wearing a down coat.” I was shaking uncontrollably.

The second I got released, I went back to hotel, sat in a super hot bath for at least an hour. I never got warm again the rest of the weekend.  I slept with a 12 inch layer of blankets on me that night and was still cold. The photo was the perfect Outside shot. Rider standing with a sun halo. He got his shot, but it ruined my weekend. It was a frozen smile for sure. And it was the coldest I’ve ever been. 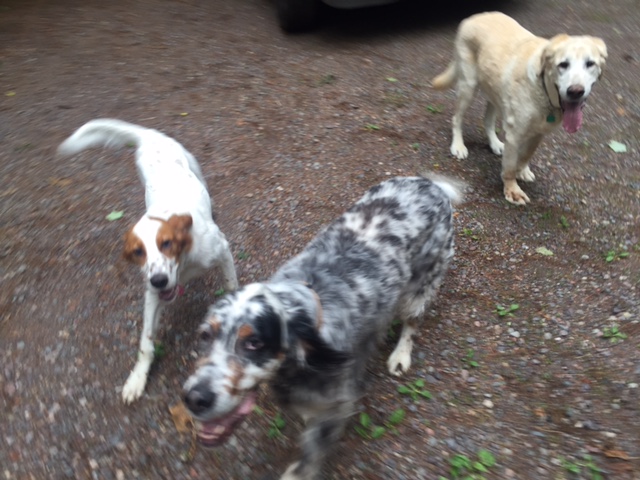 Tucker got to meet Harley yesterday. Harley is really old, but is still happy.

7 thoughts on “Being Cold”