I think the title of this post is correct.  I do know the race has been going on for a really long time.  The first time I raced it was in 1975, when I was a intermediate.  I did the criterium in Penn Valley Park.  I finished 2nd in the Olympic Development race in the 1/2 category when I was a last year junior.

Now the race is part of the Flyover Series.  I think it is a good fit.  The Pro 1/2 field was nearly 60 riders, which was nice.  The race consists of a short time trial, then circuit race, and a criterium on Sunday in the Arts District.

I skipped the time trial because it was too early and the race was scored as an omnium.  I knew I was in no shape to win the whole thing overall, so was sort of just doing it for the enjoyment.

I had been in this funk for the past week.  I think it is allergies, but whatever the reason, I’ve been draggin’.  Nothing changed for the weekend.

I just showed up for the circuit race on Saturday.  I was pretty stale the first few laps, but felt a little better as the race wore on.  It ended up being a field sprint up a pretty substantial hill.

I started the sprint on the best wheel, that of Brandon Krawczyk. He had won both the intermediary sprints and was going to win the race most likely.  I got about half way up, through the first corner and my team mate, Alex Hoehn was coming by.  I tried to move over to let him through and lost a bunch of momentum.  I failed the last 50 meters and ended up 12th.  I wasn’t good.

Sunday morning I drove to the KC airport and did my interview for customs to get a Global ID.  They just wanted my photo and fingerprints.  I passed with flying colors.  I hightailed it back to the Arts District to catch the start of the women’s race.

I then went out for a short ride.  The race was a nice course.  8 corners with a slight hill.  Super course, pretty technical with a long sprint into a headwind.

I kind of started worrying with about 15 laps to go that the sun was hitting the van and that Tucker was going to be getting hot.  I was looking for Catherine around the course and couldn’t see her.  With about 8 laps to go, I was thinking I needed to stop and go to the van, since the sun had moved and the van would be indirect sunlight.

The problem was I didn’t see Catherine before the start and didn’t think she knew where the van was parked.  There wasn’t much shade anywhere near, so I found the one place that had some.  I was totally removed from the race.  15 guys had slipped away and the field was dwindling.

I finally saw Catherine and yelled to her to go check on Tucker.  She yelled back the next lap that she already had.  I was relieved.  But also totally out of the race.

I was in a group of guys that seemed toasted.  A few guys tried to bridge, with no luck.  Finally with about 4 laps to go, Brian West went to the front and put in a huge effort.  He pretty much brought “the break” back, nearly.  With two to go, I jumped past a few guys to get to the back of the front group.  It was the fastest lap of the race (Strava KOM).

But I was sort of hurt.  I was 15 guys back going up the first bit of the climb.  On the descent, coming to the final corner, I got up to Shadd Smith’s wheel.  He and Benn Stover, plus Garrick were all in pretty good position.  I was trying to get up to Brandon, but couldn’t.  I kind of got between Shadd and Benn through the final corner and all of a sudden Benn started drifting super wide.  I didn’t watch, but I think he might have crashed.  He must have had a flat or something.

Anyway, the sprint started late and I had a head of steam, but I was coming up to Alex again and thought I shouldn’t pass him because of the omnium points.  I coasted for a second and I guess a couple guys went by right at the line.  Alex finished 5th and me 9th.  He was 4th overall, which was great.  Brandon won again.  He is pretty quick at the finish.

I jumped back in the van and drove home to pack and do the 9 hour drive to Breckenridge.  Kris was up by then and I heard some of his stories for the DK200 tandem experience.  It was epic, of course.  He flatted a ton.  Rear tire only.  Early on when it was muddy, he was having trouble with his drive chain.   But, they finished and seemed happy enough.

Vincent, Karl (Stacie’s husband) and I went for a couple hour MTB ride.  Man, there is no air here.  It is way different that Arvada or even Gunnison.  We didn’t even ride 25 miles, but a lot of the time we were over 10,000 feet.  Even Tucker doesn’t much like running here.  I’ve had a slight headache for the past 24 hours.

There is a bit of snow still on the trails, so there is some walking.  Keith and Catherine showed up late last night, so they will be along for the festivities today.  I suppose we’re riding trails again.  Why not? 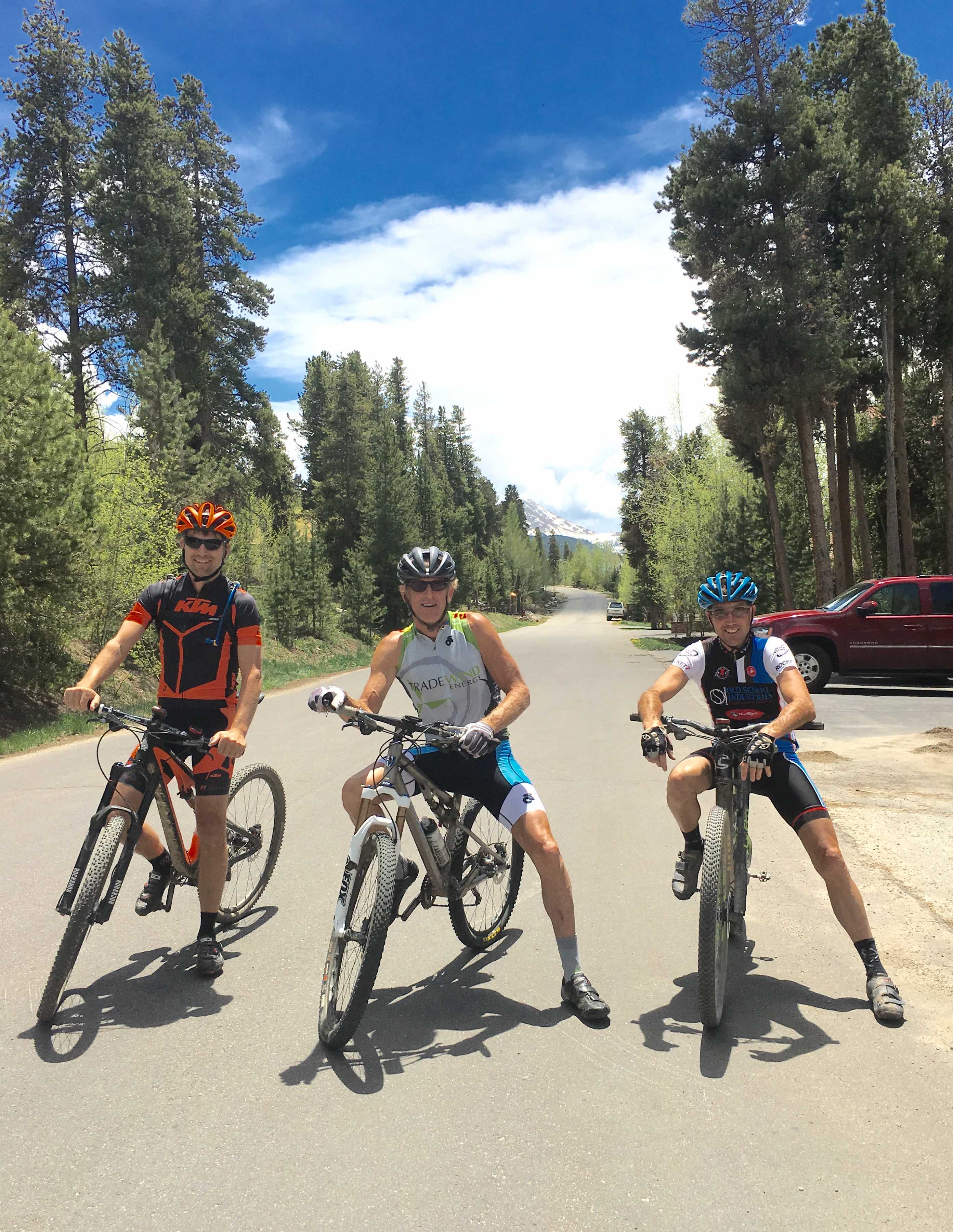 Karl, me and Vincent heading out yesterday afternoon. 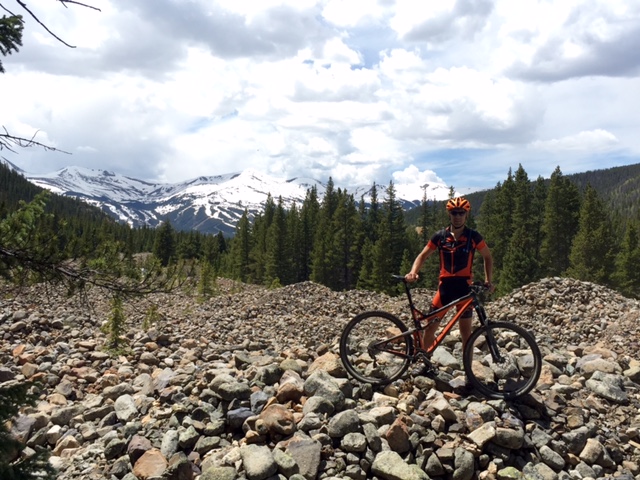 Karl out on a pile of mining rocks. 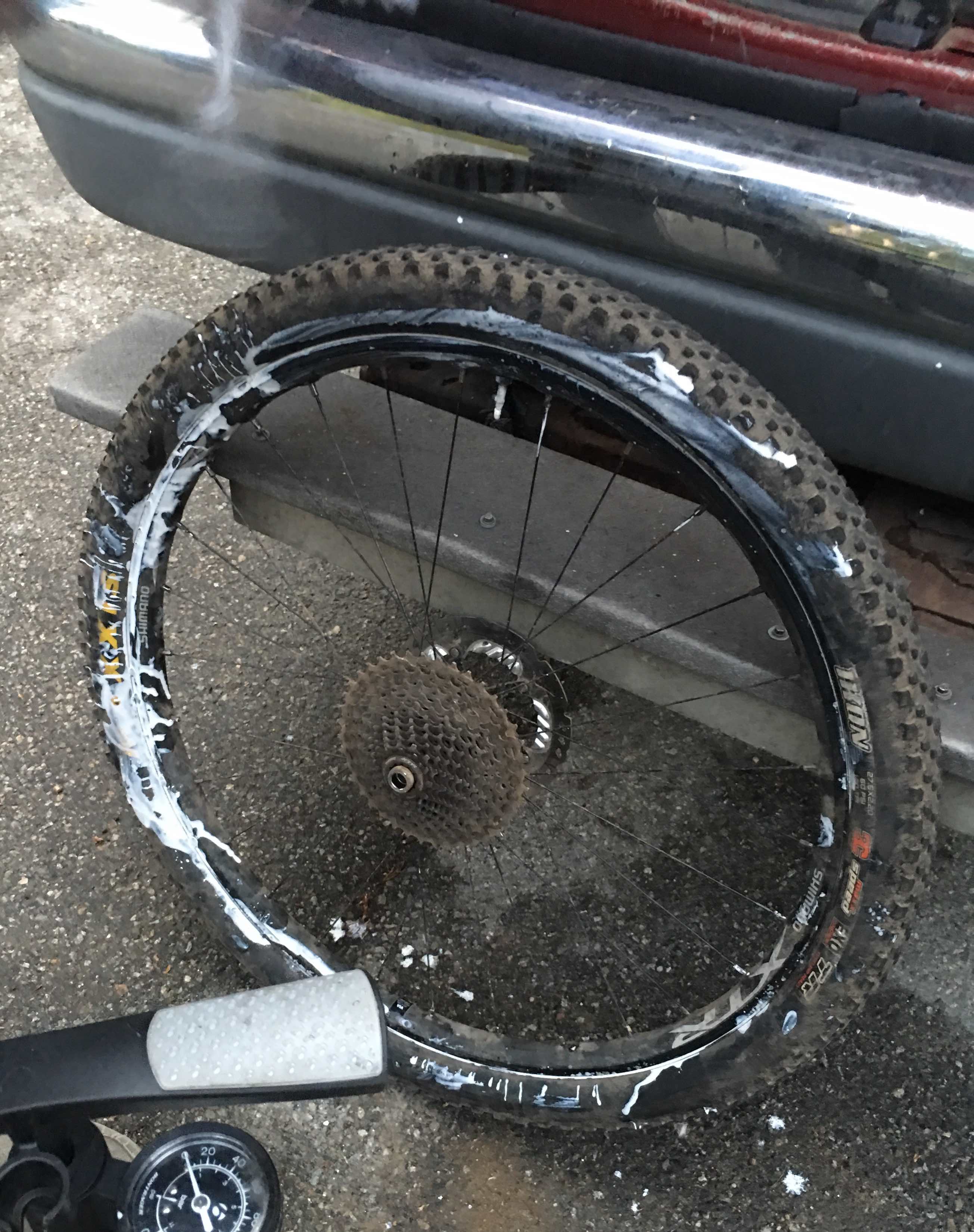 I flatted a couple times, plugged them both. Was resealing my tire. Kind of messy. 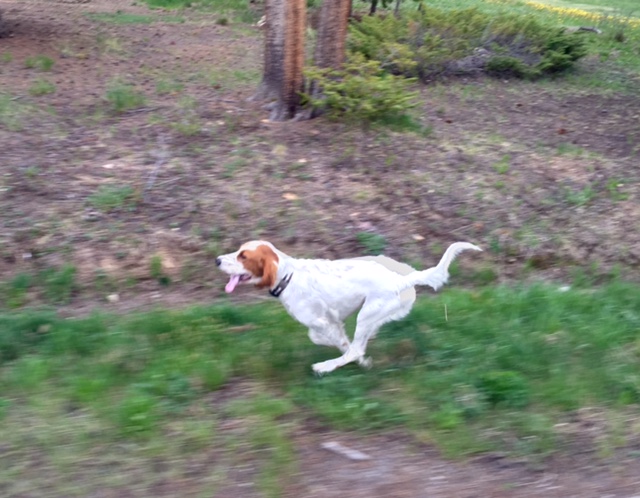 Tucker looks like he was running fast, but he was in slow motion. No air I’m guessing. 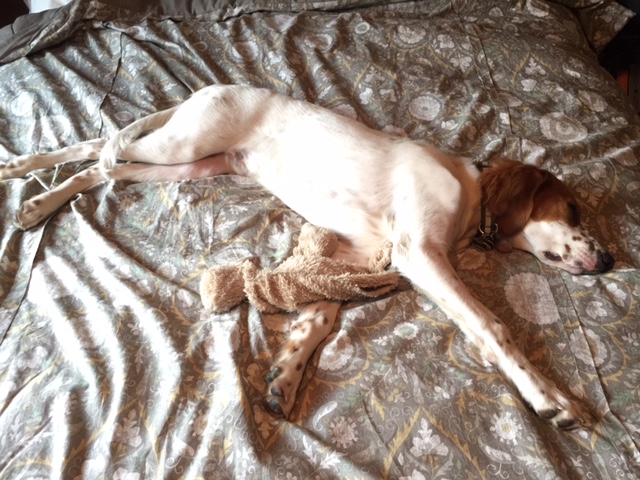 7 thoughts on “52nd Year of the Tour of Kansas City”