Man, decisions, decisions.   I have toiled the past few days about what to do this weekend. I over think things like this as soon as I get it caught in this endless loop thing that sometimes happens.

So, I made a decision.  A big part of that was riding yesterday.  I started out around noon, I was just going to ride for a couple hours, then I got caught by this storm.  Really super early in the ride.  I didn’t mind, it was close to 80 and I like riding in the rain.  But then it started hailing.  It was small at first, then started to sting.  So I turned back and headed home.

I figured I should take a serpentine route home to practice cornering in the rain.  I was having a hard time committing my whole weight to my outside pedal.  It is weird.  I know that is the only way to ride fast in the wet, but when you are apprehensive, there is something that stops you from total commitment.

I was getting more confident, then the tornado sirens went off.  I had to cut my rain training short, just because.

I had planned to go up to Burlington Iowa and race today, then do my favorite race of the year, Snake Alley.  But the forecast shows rain the next four days.  I can’t deny that the forecast is big weight on the decision-making process.  The last time I tried to race up in Iowa, in the rain, I had hip surgery the next day.   I have to admit I’m a little spooked about it.  Spooked enough to drive to Colorado and do a 64 mile MTB race with Vincent.

So, I’m driving to Arvada Colorado this morning and then to Gunnison tomorrow morning for The Full Growler.  I contacted my friend Dave Wiens, Mr. Gunnison himself and he got me squared away in the race.  It is two, 32 mile laps of a pretty technical course.  I figured since I’m not acclimated at all, I should just start the race slow and try to ride into it.  That is probably the best tactic for a 5+ hour MTB anyway.  I historically don’t do too well at altitude initially, but I’m doing it for the life experience, not for the result.

I did ride 4.5 hours on Wednesday, on gravel, with Brian.  He is moving to Colorado in two weeks, boo.  But, he is doing the Dirty Kansa 200 mile gravel race two days before he goes.  He only got in a little over 100 miles on Wednesday, but it was hot and humid.  Not super hot, but a lot hotter than it has been around here so far this year.  I was pretty done at the finish.  I drank 5 big bottles, plus a 52 ounce Gatorade and came back 9 pounds lighter than I left.  It would be impossible to drink enough to keep the water weight on in those conditions.

Anyway, Tucker and I are heading west.  Tucker needs to met Vincent’s new dog, Nick, plus Jack, his older puppy.  Brian is driving out on Saturday to house shop on Sunday and Monday.  I have a van full of Brian and Michelle’s bikes to move to Colorado.  Trudi is flying to Denver on Sunday morning, after Pro Road Championships, from Winston-Salem.  So the travel plans are complicated and set.

I hate missing Snake Alley, plus the new Davenport Criterium in the Quad Cities.  Both those courses are super and suit my abilities.  I eventually hope to regain my rain riding confidence.  It just isn’t going to happen this weekend.

Then the next couple weeks are jammed.  Tour of Kansas City starts next Saturday.  It is both days.  The Friday before is the Oklahoma Pro-Am, NRC race.   Then back out to Colorado on Sunday, after the criterium, to hang in Breckenridge with a gaggle of friends for the week.  Then back to Tulsa for Tulsa Tough on Friday night. Pretty crazy travel schedule.

Alright, I need to pack up and get driving, so Vincent can school me on South Table Mesa this afternoon. 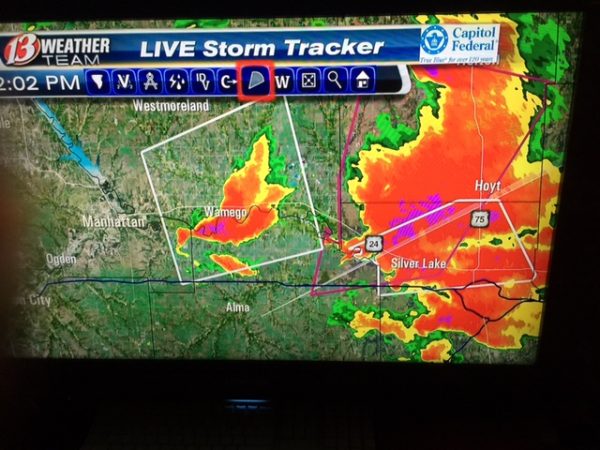 SInce the sirens were blowing, I turned on the TV to check out the situation. This was just west of Topeka. It was ugly. 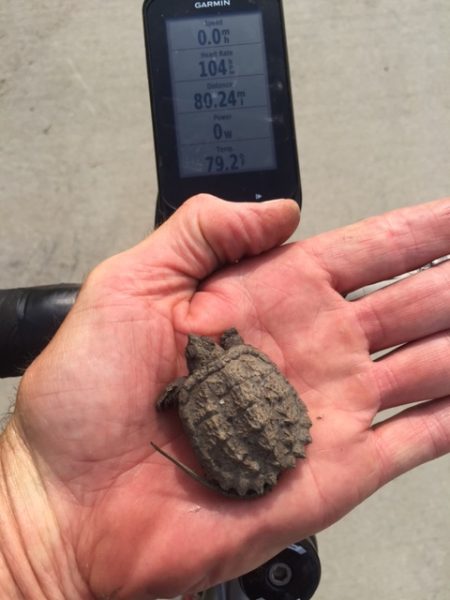 I found this little guy in the middle of the road riding on Wednesday. I moved him to a pond. 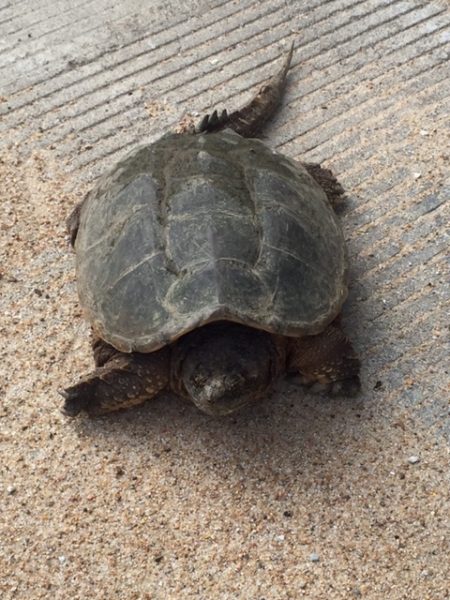 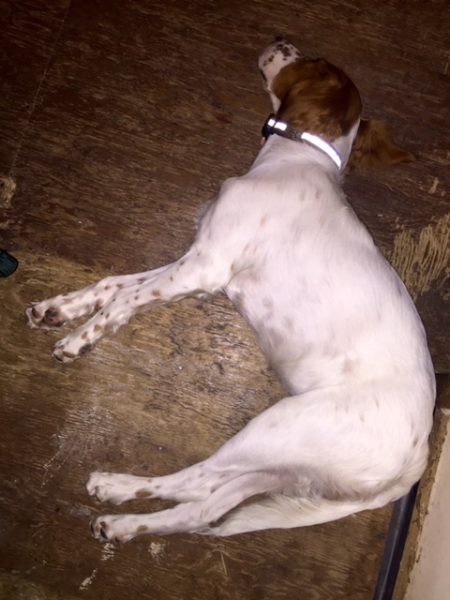 Tucker is moving kind of slow this morning.