It is funny how a mind works.  Yesterday I was looking for some cleats and found an old pair of Shimano shoes.  I was horrified.  They were so beat.  I can’t believe that I rode them until the point they looked like this (photo below).  The soles are split and I had to cut the front from my big toes.

Anyway, on my ride, I was thinking about how many different pair of cycling shoes I’ve gone through and how they have progressed.

I started out of some old Ditto Pietro Italian shoes.  I’m don’t think the first pair were labeled Colnago, but very early on I wore Colnago branded shoes.  They were horrible.  At least compared to modern day shoes.  They were made of leather, with laces, and you had to nail the cleats on and then bend them over.  This was in the toeclip days.

I went through quite a few pair of Colnago branded shoes.  My good friend, Ed Bauman, worked at Celo Europa and I got them cheap through Marcel there.  The shoes were so flexie that they would break my toe clips.  Especially when I started riding aluminum clips.

I went from these POS shoes to Duegi.  I don’t think the first Duegi shoes had wood soles, but very early on they went to wood.  Talk about a difference.  The wood sole was about as stiff as carbon now.  It was crazy how big a change it was.

On a side note, after getting my Duegi shoes set up and realizing they were going to work, I took my Colnago shoes out to my backyard and chopped them up with an ax.  I hated them that much.

All the shoes, up until this point were black.  We would get them super small and carry a water bottle full of water and alcohol to spray them over and over so they would stretch to fit.  It you didn’t do this, when you rode them in the rain, the shoes would get larger, super sloppy.  Our shoes fit like tight gloves.

I raced Duegi shoes for quit a while.  Georgio, from Gita Sports, was the sponsor of the Levis team for a long time and he imported the shoes.  They were great.

Our team director, Michael Fatka, didn’t like the look of the black shoes with our kits, so he spray painted his white.  And that got an idea going and pretty soon Duegi made us white shoes.  So we have Michael to thank for the start of non-traditional cycling clothing.  He was the first to come up with kits matching bikes too.

Nike made me a pair of custom off-road shoes.  They were really for cyclo-x.  Trip Allen, a local bike racer from Wichita, worked for  Nike and made me custom shoes.  I think these were really the first shoe made specifically for cyclo-x or off-road riding.  They were pretty unique.  I had them and loaned them to Trip for a Nike exhibit.  I wonder what happened to them.  I’d like them back.

And Puma tried to copy Duegi with wood soles one season.  They supplied the US National Team one year.  Miji Reoch was working with Puma.  The day after Tour of Texas one year, everyone was hurt from the post race partying.  We had early morning National Team photos scheduled.  Miji handed out new Puma shoes to all the riders.  The problem was that they made the wooden sole with the grain of the wood running perpendicular to your foot, not parallel.  If you rocked on the shoes, they snapped in half.  All our shoes were done after the photo shoot. We thought it was hilarious.

Anyway, going from Levis to Schwinn, I think I kept riding Duegi shoes.  That was until Thomas Prehn, who rode on the Schwinn team with me, started working with Nike.  Nike would sponsor us with something like $3000 worth of Nike product to ride their shoes.  They weren’t very good.  You’d think that a shoe company like Nike would be able to come up with a good cycling shoe.  They never did.

Then one year, Mike Farrell, our team director from Schwinn, said that Schwinn was branding their own shoes, and he would pay us $2500 to ride the Schwinn shoe for the season.  They were bad.  Light, nylon shoes, lace up.  I think I had to modify mine some, but thought that $2500 cash was better than $3000 worth of Nike product.  Plus, I had all the Nike stuff I every could have used.  At the end of the season, when Mike and I were renegotiating contracts, I reminded him he owned me $2500 for wearing the shoes for a year.   I thought it was going to be a problem, but he just said he would have it included in my next paycheck.  And he also said he couldn’t believe I could wear those shoes for the whole season.  No one else on the team did.

Then Shimano started making shoes.  They had some Japanese engineers fly around the world, to the races, and made images of our feet.  And they made shoes.  Like the best shoes, from square one, ever made.  Sidi made some good Italian shoes then, but Shimano was better. They used different materials, not leather like their Italian counterparts.  They fit and wore better than any other shoe up until that point.

I’ve raced Shimano shoes pretty much from then on.  The first Shimano MTB shoes was not so great.  They used Velcro straps that didn’t stay on when they got wet and muddy.  I was racing my first real MTB National, in Mt. Snow Vermont and stepped into a deep mud hole.  When I retracted my lower leg from the hole, no Shimano shoe.  I think I had already taped the shoe on with electrical tape.  That was the best tape they had back then.  Needless to say, I wasn’t too thrilled putting it back on.

When I was riding for Specialized, I had a shoe contract with Shimano.  Specialized didn’t make shoes.  But I had a contract that I needed to wear everything Specialized sold.  Then they came out with MTB shoes.  I was stressed.  They shipped a giant box to the Cactus Cup in Scottsdale for us to race.  The shoes had plastic bottoms.  When we mounted our cleats on the bottom and then clipped in, the durometer of the plastic was off, so the cleats spun.  Each and every pair.  We even tried to heat up the cleat with a torch to melt it into the bottom, but that didn’t work.  I forgot how many pairs that Specialized had made, 10’s of thousand and they didn’t have hardly any pairs returned.  I thought that was impossible.  They were unusable.  It just showed me how knowledgeable the average cycling consumer was at that time.  I kept riding Shimano shoes.

Now the modern day shoes.  The soles stiffness is key.  Now it is carbon or super hard plastic.  I can’t really tell the difference between the two.  It seems to me that a R171, Ultegra version of the Shimano shoe is as stiff as a the R321, which cost twice as much.

Other than the soles, the closure systems have improved a ton.  Some companies, like Giro, have went retro with laces again, but Boa and the normal ratcheting systems most shoe companies use are way, way better.  I’m not so sure about the Boa system.  It seems like a lot of people I ride with have the nylon string break.  I know it is fully replaceable, but that seems like a hassle.

The markings on the bottom of the shoes make it much easier to position cleats when getting new shoes.  It seems like such a no-brainer, but they didn’t do that for such a long time.

Anyway, shoes have improved a ton over the years.  They are good memories.  I’ve went through 100’s of different pairs of cycling shoes.  I remember the shoes I loved and especially the ones I hated.  They all bring back good memories though. 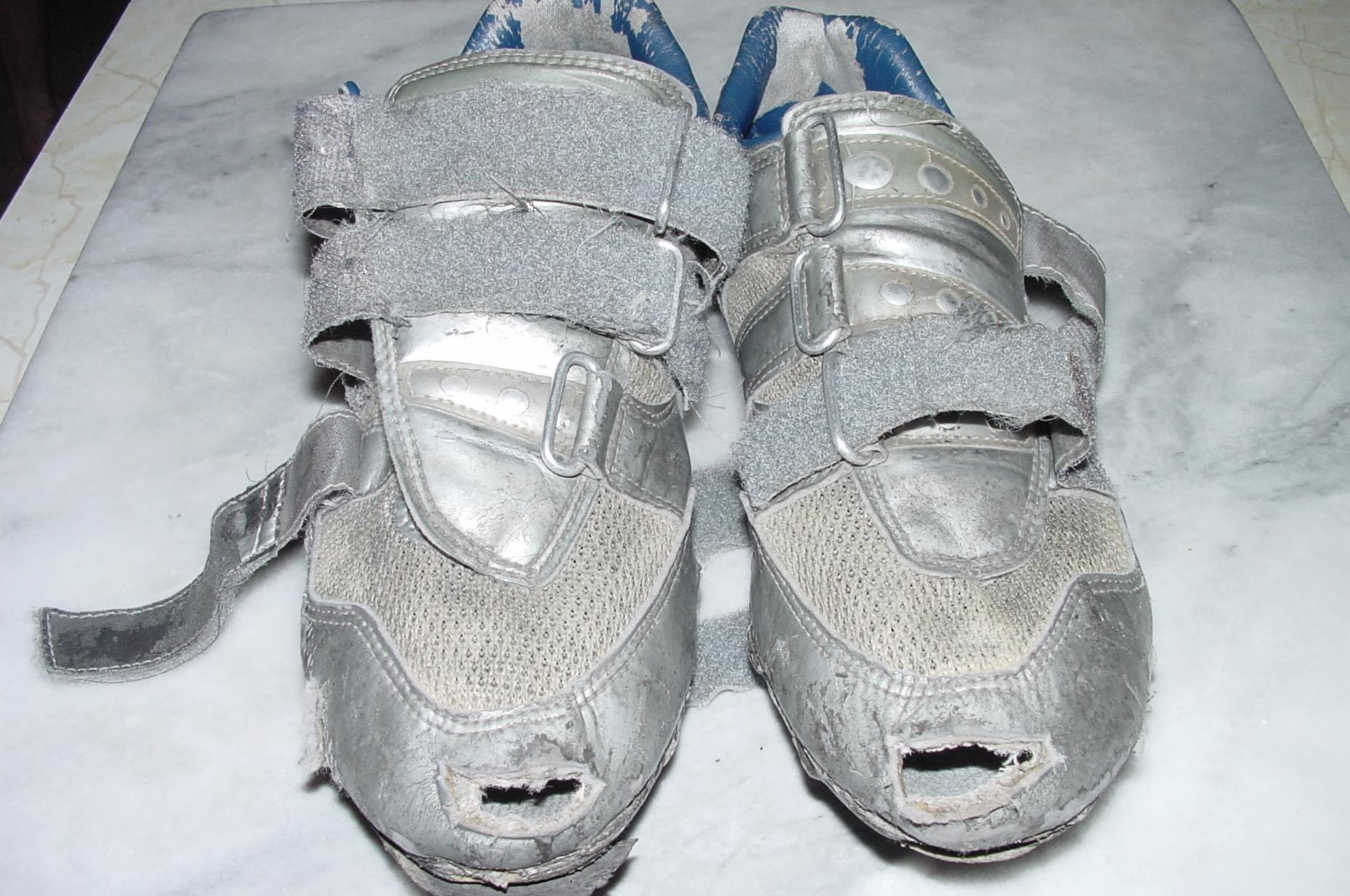 The Shimano shoes I found. I’m not sure why I still have these? 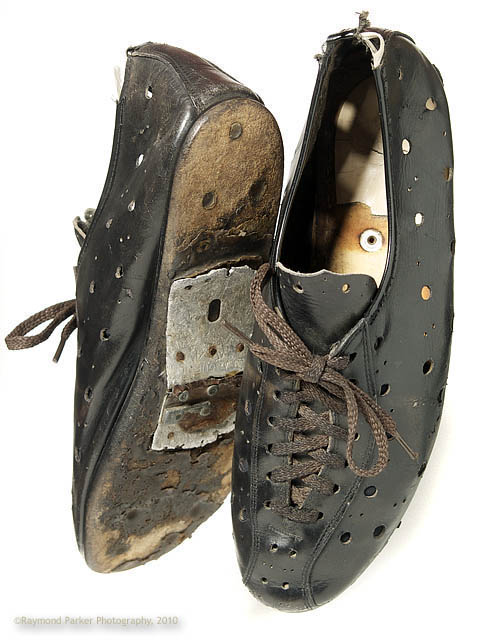 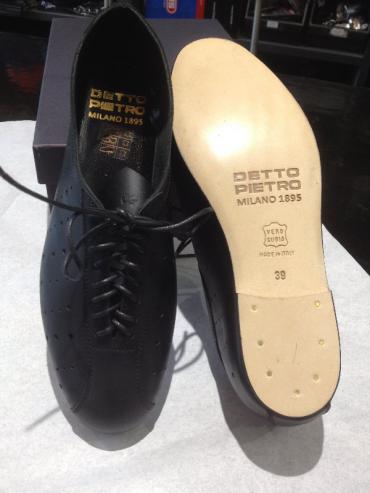 I didn’t realize that Detto still made shoes. They look pretty nice by the photo. 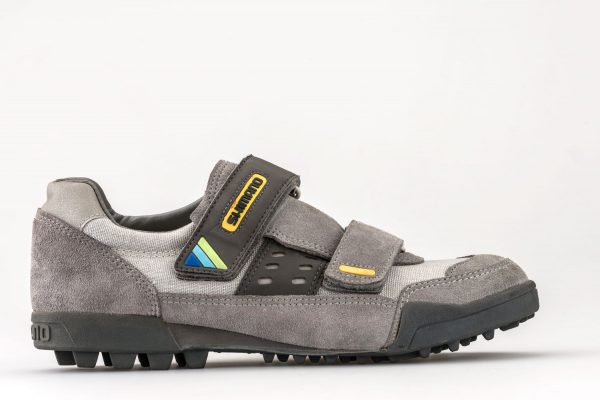 The original Shimano M100. The top strap wasn’t that great. 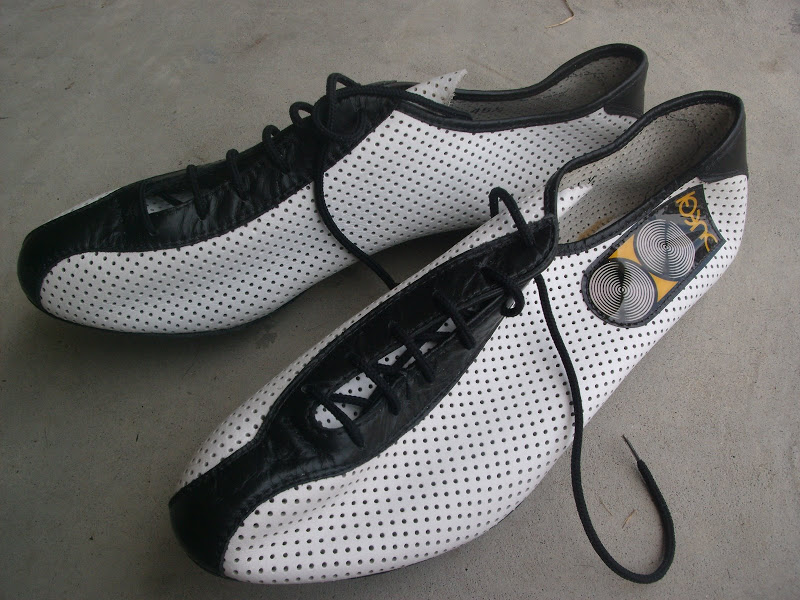 The first white Duegi shoes. They had wood soles, then went to nylon. 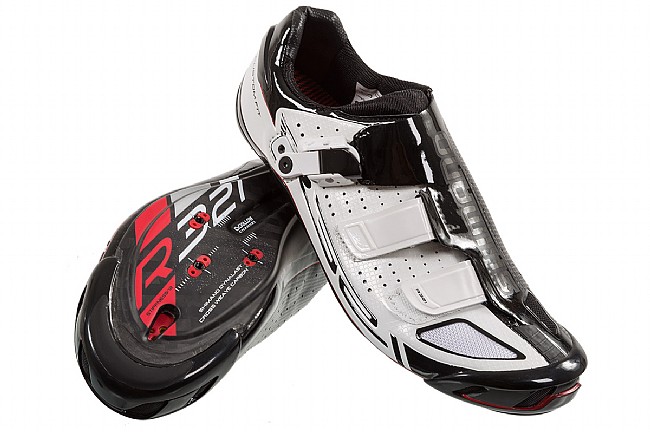 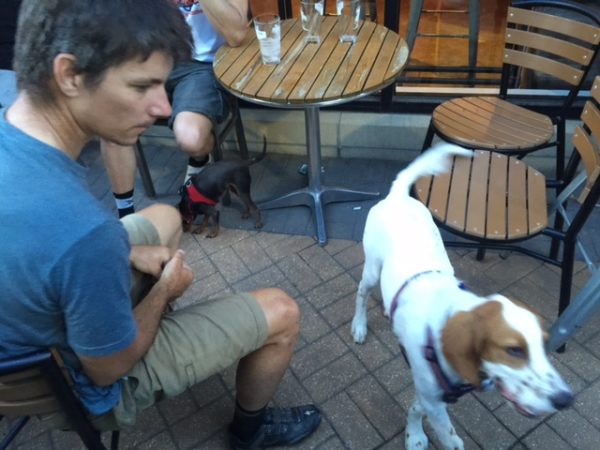 Tucker ran over to Tuesday Night beer night at PT’s. It was long for him. He eventually ditched to cycling crowd to go hang out at the other end of the patio with a group that had a Chihuaha.