I finally got to do the Lake Wilson MTB Race.  It has been on my race bucket list for a long time.  And it didn’t disappoint.

Lake Wilson is a reservoir in Central Kansas.  And the terrain around the area is unlike the rest of Kansas.  You’d think you would be in Utah or some other arid region of the country.  Small hills and lots of rocks.  Much of the trail rides next to cliff drop offs.

The race was 28 miles, but that seemed long for the conditions.  It was hot, not hot by summer standards, but hot by spring standards.  There is no shade on the course, not hardly a tree.  But the wind was out of control.  It was super windy, like 30 + and gusty.  Gusty enough that when I was riding by the edge of the reservoir, I was pretty prepared for a gust that might blow me in.

I can’t say the race was close to perfect for me.  But, looking back upon it today, it is about what I should have expected.  I am a rusty MTB racer.  It was 100% single-track, loose single track and the skills required to ride on that are something you need to practice.  I hadn’t.  I’ve ridden my Eirksen dual suspension bike 3 days this year.   It had my number from Berryman on it just a couple weeks ago. That was from October of last year.

The race is up a kilometer paved climb and then single track for the duration.  I got the whole shot, sort of.  No one was really fighting for it.  Benn Stove should have taken it, but he couldn’t decide whether it was the turn to the trail or not.

The first loop is super technical.  Like walking technical in places.  I led for just a couple hundred meters, then slid out my rear wheel on a loose corner and Micah Gordon passed me.  Then Benn caught me a little later and I let him pass me.  Then a little while later, Kalan Beisel, tried to run by me on a little walk up and I jacked him up, so just moved over and gave him a push when he went by.  I was all over the place.  My “running” on loose sandstone is pitiful at best. Mainly from my left hip, which I broke a couple years ago.  So, I was a ways back.

We did a section they called the “bird section”, but I was over cooking the corners and using a ton of extra energy as Benn, Micah and Kalan rode away together.  I wasn’t losing that much time, but using a lot of energy, which was hard to access.

I eventually caught Benn again, just in time to do the same technical loop the other direction.  It was much easier to ride the other was, but Benn lost me again.  Then we went out towards the water.  I started feeling better and tried to focus, not that I wasn’t already trying to focus.

Benn was climbing pretty good, but I assumed he was going to eventually blow.  He is young and tends to have a hard time going hard for long periods just now.  I caught him, then Micha just a bit later.  We were over an hour plus into the race and I was maybe a couple minutes back on Kalan.

I started riding harder and feeling better.  I was pedalling better.  Pulling up on the backstroke while seated.  Riding less technical hills off my seat.  I was going way better, but was still dabbing a ton.  My bike handling was atrocious.   At least compared to myself.

I did a time check to Kalan and got him down to less than a minute with 7 miles to go.  I was thinking, sort of, that maybe I could catch him if I rode smooth.  But, just a little bit later, I crashed.

It was a stupid fall.  I was threading my way through two big rocks and tapped my bar end on one of them.  I was just 1/2″ inch in the wrong spot.  It twisted my bars and I high sided forward.  My bike got wedged between the rocks and I landed on another one on my right hip.  My left foot was still clipped into the pedal and I was sort of stuck there.  Adding to the misery, my left hamstring cramped.  Plus, I ripped a hole in a brand new pair of bib shorts.  Kind of a disaster.

I finally got my left foot unclipped and stood up.  I realized I wasn’t hurt much and got going, but it was at least 30 seconds, probably more.  I looked at my Garmin and realized I only had 5 miles left and couldn’t catch Kalan anymore.  So I just rode in.

I finished close to 2 minutes back in 2:16.  Not so bad really, but I have a much better race than that in me normally.  But, like I said above, I am super rusty.  If I had the race to do again, I would try to ride much cleaner.

The course doesn’t reward speed in the wrong places.  There are very few spots where you can just pedal hard and not be worried about having to brake a ton.  I hardly ever got anything near perfect.

Doug Chambers, is the man who’s passion is Lake Wilson.  He built the trails and promoted the race.  He thanked me a ton of time for coming, which was super nice.  It didn’t disappoint.

The prize list was top heavy, but great.  $1000 to win.  But it dropped to $400 for 2nd, which was great too.  I wasn’t there for money, I was there for the life experience.  And it didn’t disappoint either.

I learned a ton, or re-learned a ton.  I got to meet a bunch of new people I should have met before.  And I got to race on a new course that is incredible.  Pretty great weekend, really.

Catherine, who went with me, did great too, but she was hurt.  Not from crashing, but from riding.  If I thought I was rusty, then she was nearly seized.  On a new dual suspension bike that she’d maybe ridden 50 miles on total.  Plus, the race was the same length.  She was in 2nd for more than half the race, but bonked and crawled back.  She still finished 3rd, but she was cramped up and barely moving.  The whole drive back she was cramping in different places.  And she doesn’t cramp.

I can’t say I’m not hobbled today.  My right leg, from falling, plus my lower back. Mountain bike racing is a hard sport, especially when it is hot and you’re not conditioned for it. 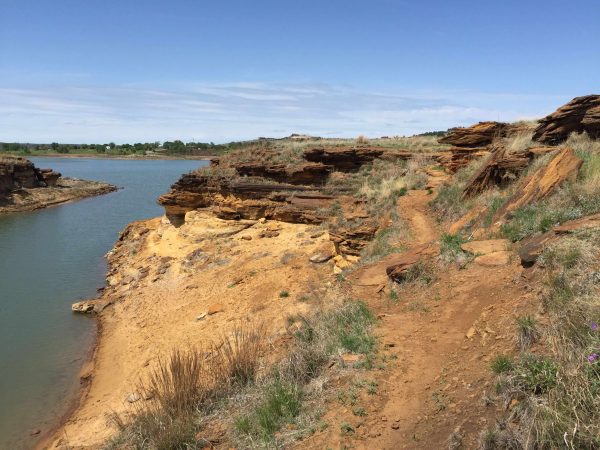 Most of the course is like this. Pretty technical and exposed. 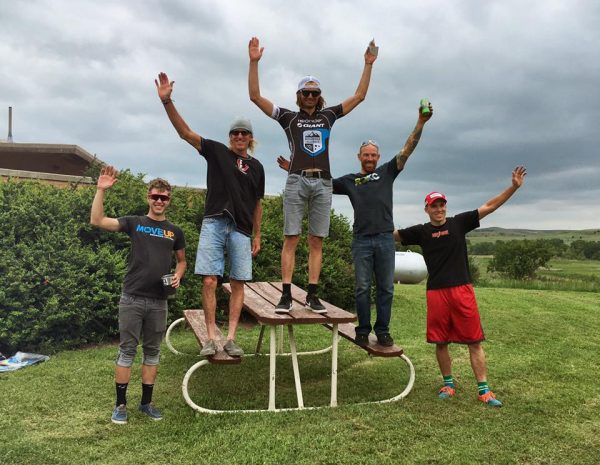 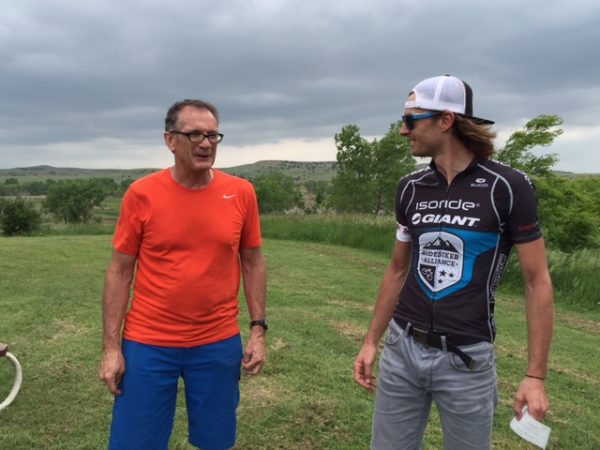 Doug Chambers and Kalan after the race. 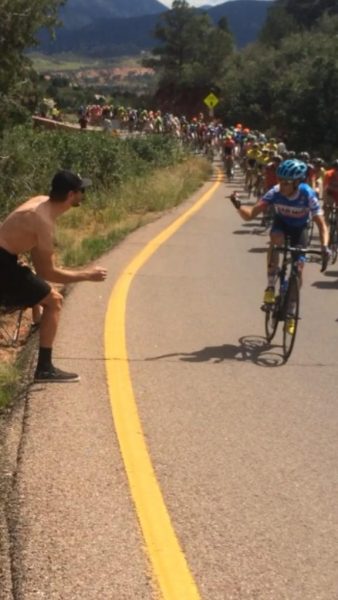 On a side note, Kalan was the guy who got Tom Danielson to give him some love a couple years ago at the Pro Challenge. He just “called him a doper and told him he sucks.” Nothing false there. 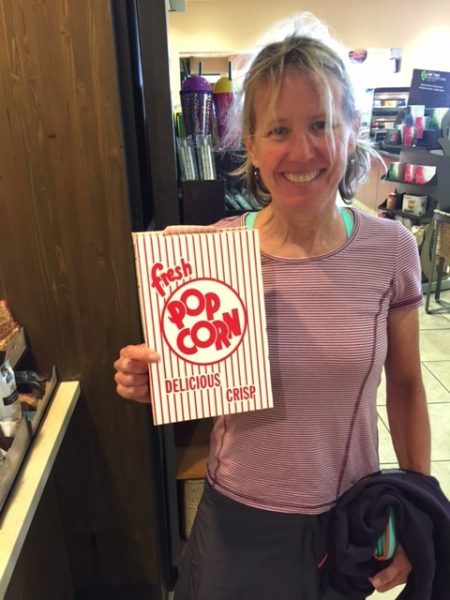 Catherine bought salty popcorn while were were stopping for coffee. 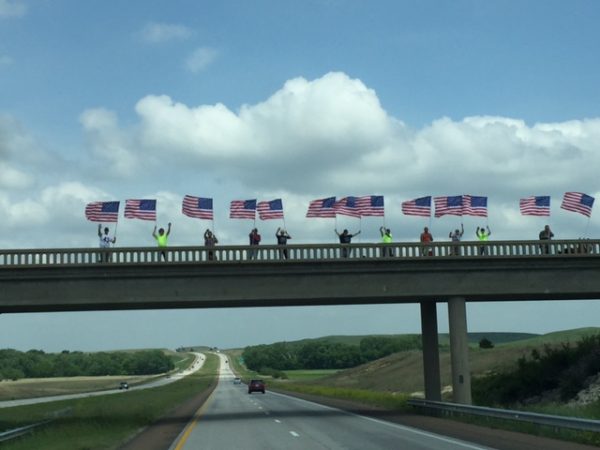 Every overpass on the way home, it was like this. We tried to look it up and all we could come up with it that is was Armed Forces Day. I’m not exactly sure what that is, but there are lots of supporters here in Kansas. 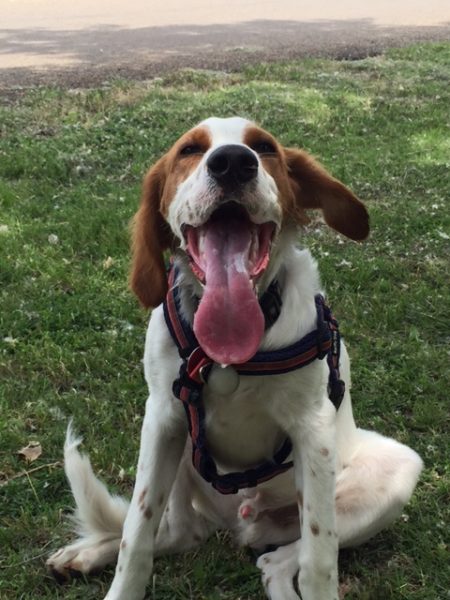 Tucker was hot too. He slept like a rock on the drive home.