One of the reasons the sport of racing bicycles attracted me is that it is not subjective.  By that I mean you start, race, and first one across the line wins the events.  Or you ride the fastest time and you win.  It isn’t a sport where other humans decide whether you win or are good, such as diving, gymnastics and such.

But recently, cycling is becoming more and more subjective.  Race officials are deciding whether a rider can finish a race.  I hate the whole aspect of this.

I meant to do a long post on the 80% rule in cross that has become common.  It was abused seriously at the Cyclocross National Championships last January in Asheville.  It is abused all the time.  I decided it would probably be better to just try to change the situation from the inside, thus through the proper channels, than bitch about it here.  We’ll see if that worked at all.

But after participating, then spectating the races at Joe Martin, I feel obligated to go ahead and “bitch”.

First of all I want to state right up front, that this post is about the officiating of the Joe Martin Stage Race.  The promotion was top notch.  I personally saw Bruce Dunn, the promoter, who races himself, working the event, doing the grunt work, plus doing all the other aspects as the promoter.  I, once again, personally saw Bruce talking to the UCI officials about how he expected the races to be scored. I know from history, that Bruce is super concerned that the racers are placed correctly.

But, Bruce isn’t in charge of officiating.  That is up to the appointed officials.  And I think they did a pretty pitiful job of this.

I should start on Friday’s road race, but will just leave that.  The scoring of the 1/2 race was pitiful at best.  I can’t see any effort made to try to come up with proper results. But, that is that. The Pro race too.

Let’s flash forward to Sunday’s criterium.  The race finishes on a pretty hard climb, for a criterium.  Historically, there are time splits on this stage, so it is an important stage.

I was standing at the finish line the last few laps of the Pro race, when it really started going hard.  The field started splitting into pieces with 4 or 5 laps to go.  Robin Carpenter had taken a flyer and the pace had really picked up.  With 4 laps to go a big split happened in the field. More than half the field got shelled.  It was carnage.

The leaders went through with two to go and then a few stranglers.  About 45 seconds back a huge group of riders, over 20 came up the hill, still racing, and the officials stepped out on the course and gave them the red circle deal and told them they were finished. They pulled them from the race.  I timed the gap to the leaders crossing the line behind them, with one lap to go, and it was over 2 minutes.  On a 2:45 lap.  So they were 45 seconds back at most.  I realized they had no chance of being lapped.

I was standing there with Tucker and went over to the officials and asked them why they were pulling riders with 2 laps left, with no chance of being lapped.  No one really would answer the question, but someone mumbled something about “out of contention”.  At least they could sort of quote a partial rule.

Anyway, about 20 guys left the course, but two of the guys kept riding.  Stefan Rothe, Elbowz, and Evan Murphy, Lupus Racing, kept riding the last two laps.  They were at the front of the group and wanted to finish, for their own reasons. They kept riding and didn’t come close to being lapped.  They finished the race, maybe 1/2 a lap or more behind the winner, Travis McCabe.

I talked to a couple more officials after the race, then called a couple UCI officials yesterday and as far as I can tell, the officials at the race are clueless.  Here’s the rule – 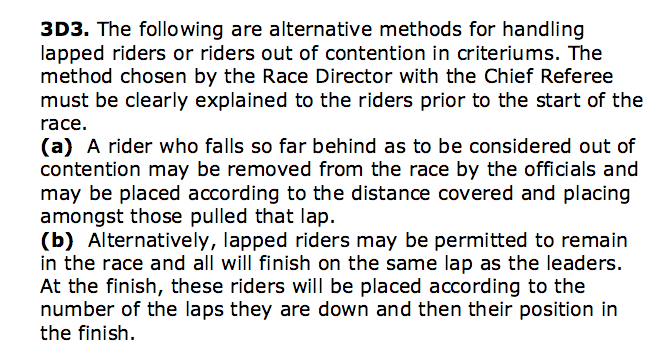 So, if the official clearly explained to the fields that this is what they were doing, then they had “permission” to exercise their discretion according to rule 3D3(a).   But, out of contention for what?  Who is to decide who is out of contention?  For what, winning the race?  Stefan was 3rd rider for his team and was riding for team GC.  Think the official took that into account?   If they were pulling guys out of contention, then they should have not let any rider that was more than a couple minutes back even start the race.  Are they saying out of contention for the stage, the race overall, team GC, what?  These guys had been split off the back with 4 laps to go and only had 2 laps to complete the event.

Looking at the results after the race, they put the whole group, Stefan and Evan included, 4:08 behind the winner.  It is a fantasy time, completely made up number.  They would have had to have been over a lap and a half behind, and since both of them kept riding the full distance and were maybe 1:40 or so behind, then the number is complete bullshit.  I guess according to the rule (b) that they only need to be placed “amongst those pulled that lap”.  So they give them a totally fictionous time and then place them in the overall GC?

And this happened in all the events, not just the Pro1 race or 1/2 race, but I saw them pulling 3’s that weren’t close to being lapped.  Maybe the Pros don’t care that much normally, but I talked to a few and they were furious about how illogical the scoring at this event was.  Sometimes giving the whole field the same time at the end of a road race and then other race splitting the field.

Joseph Schmalz was put 10 seconds back on Friday’s road stage, when he was at a stand still behind a crash with a kilometer to go.  Then he rode back up to finish 27th and they still put him 10 seconds back with a time split at 21st place.  If he would have had the 10 seconds, he would have finished 5th overall, not 8th.

This is a UCI race, with UCI points.  These points are super important to these guys.  It is ridiculous, when considering there was a crash in the 1/2 race in the last kilometer , the same day, and they gave 76 riders the same time when there were huge splits in the field.

These races, both in the 1/2 race and the Pro race were decided by a matter of a couple of seconds overall.  Time bonuses and splits in the last sprint decided both the races.  And the officials add or subtract seconds, or even minutes, from riders times at their will.  Or because they don’t have the ability or knowledge to do it any differently.

Or, how about this.  There was a crash on the last lap of the criterium, when the field was together.  John Murphy, UHC fell, most likely not his fault, and a bunch of guys either fell or got caught up.  The officials gave them, 15 riders, the time of the 9th place rider across the line, 9 seconds back.  What rule were they using here?  Here’s the rule I believe they were supposed to use-

(c) Finish. (i) In the case of a group finish, the Chief Judge shall attempt to place as many riders as possible and those who follow shall be placed equal up to the point where individual riders can again be identified. (ii) A rider who suffers a mishap in the last three kilometers of a road race stage or after free laps have ended in a criterium stage shall be given the same finish time as the riders he was with at the time of the mishap, provided that the mishap was observed or otherwise verified by a race official

These guys were racing for 1st, not 9th?  I’m sure an official tried to use some intellect to figure this one out, maybe they could explain it to me?

I could go on and on about how badly the races were scored.  These were just a few examples. Each and every race, minus the time trial, had problems.  The results in each event were just wrong.   It is so strange racing all out for a matter of seconds for nothing.  The whole fiasco detracts from the credibility of the event.  An event that has gone on for generations and deserves so much better.

I don’t understand the problem that cycling has with scoring.  If you go to the smallest ski race in Wisconsin or Minnesota, they have chip timing.  The results are instant and correct.  There are so many ways that some of this could be minimized.

But officials using their subjective discretion to pull riders out of races because they are deemed “out of contention”, with no downside to letting them finish, other than the hassle of scoring them, is completely wrong.  Especially when they prorate their time erroneously.

Shame on them. This needs to be addressed at all levels from Master’s racing to UCI professional results.  Let try to fix this problem, nation-wide, once and for all.

All the wrong results can be found here. 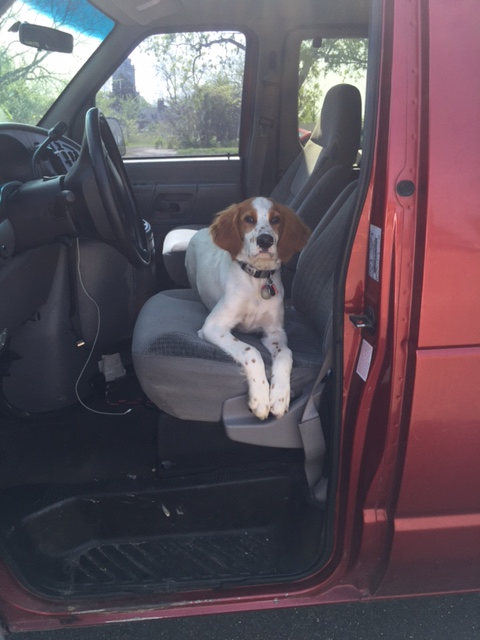 Tucker loved the whole weekend, but he doesn’t yet quite understand how races are scored because he’s a puppy. The officials don’t have that excuse.