Yesterday was a 110 mile road race that is one big loop.  Pretty unique for today’s US racing. Bruce Dunn, the promoter, seems to have a good relationship with the local authorities.  I say that, but yesterday’s “rolling enclosure” was pitiful.  There is no rolling enclosure that oncoming traffic is coming at the field at 60 mph.  It was pretty awful the first hour of the race, then really got a lot better.

The race is not really that difficult terrain-wise.  It is pretty lumpy after 40 miles, then at 70 miles there is a 10 mile climb up Mt. Gaylor.  And even that climb isn’t super hard.

The race was pretty non-eventful.  Nothing really happened.  I actually tried to “escape” a few times over on the lumpy side, but had no luck.  I was pretty sure it was all a waste, but I felt like I had extra energy and like to ride aggressively.  The last time I tried, I had to jump 3 or 4 times on the same hill to get away.  Each time someone new came along.  By the 4th time, the guy that came with me, pulled by me so hard I had to chase him a couple hundred meters to get on. Then I was so gassed I had to sit on.  Some attack by me.  Silly. We only stayed off the front a few miles before the masses reattached.

Heading up to Mt. Gaylor I realized it was going to be a field sprint.  That is 40 miles from the finish.  It was a strong headwind, and I’ve done this race enough to know that just about everyone will make it over the climb when it is a headwind.  Headwind up the climb and headwind down and the 20 miles to the finish.  So, I just chilled.

My feeling were all over the place.  Sometimes I felt close to good, then I was crampy, then good again.  I think a lot of guys were feeling the same.  It was hotter than usual, the first sort of hot day of racing for a lot of guys, so lots of kits were crusted in salt.

I carried a flask of pickle juice with me.  And a flask with a quad shot of espresso.  Man, talk about opposites.  I think the pickle juice sort of worked.  I felt like cramping, but never did.

There is a 20 mile flat, downhill mostly back to Fayetteville.  And it was headwind, as I said.  The field was pretty done racing.  Everyone chatting, no one really doing much.

I talked to John Purvis for awhile.  I met John when he was super young.  He is from Arkansas and he had his grandfather bring him to a cyclo-x by my house in Topeka.  He was so small, but could bunnyhop the barriers.  He raced awhile, then disappeared.  He went to college and ran, and has been living in Sweden for 2 years.  Now is is back racing.  He finished 3 times in the top 10 in UCI cross races last season.  He was 5th in the time trial, I think.

Then I talked to Brian West.  Brian is riding a 1x setup on his road bike.  52 in the front and 11-36 in the rear.  He really likes it.  He said he was hurting during the race.  That Joe Martin was his first race of the year.  Wow.  He finished fine.

One rider rolled away on the flats at the bottom.  A Lupus rider, Kyosuke Takei rolled away about 20 km out.  He was going good.  I timed him at about 10 km and realized we weren’t going to catch him.  Pretty unreal power he had.

Anyway, the finish of the race is a little tricky.   You’re hauling down a giant road, then make a sharp left about a mile from the finish.  Immediately you do a sharp right and start up a pretty short, but steep climb.  And it goes up from there to the finish.  There are a couple little dips, but it is a hard finish.

The end was weird for me.  I was planning to be on the right side of the field, where it was wind sheltered, but got shuffled to the left side.  I had to go into the wind to get towards the front for the first corner.  Positioning is everything for this sprint.

Turning the corner, my bike felt weird.  On the next left corner, my front tire completely folded over.  It was going flat.  I shifted into my small ring for the first pitch and when I stood up I was on my rim.  I just kept riding, but losing places.  I was probably 20 guys back over the first pitch, but everyone seemed dead.  I figured I’d try to limit my time lose, since they normally split the fields.

On the next dip I passed a bunch of guys and made contact with the first group on the descent to the last turn.  There were maybe 8 guys ahead of me and it would have been so easy to just lead into the corner.  But it would have been disastrous.  My young team-mate, Alex, was in super position on the right., maybe 4 guys back.   The last corner is a right, so I went to the left to be on the far outside.  That way I was only endangering myself.   I took the corner super wide and scrubbed all my speed.  Man, the last 400 meters was long coming from such a standing stop.

I’m not sure where I finished.  The results were completely jacked up.  The first set of results had me in the 30’s, which was way off. The second set said 17th, which seems a little far back too.  I have a hard time believing they can’t score a race this day and age.  John Purvis finished 5th and Alex 8th.  At least that is the official results.

Kyosuke won solo by nine seconds.  I heard from a couple people that he took his time posting up.  Like he did it more than once.  He ended up being just 1 second out of 2nd place, in 4th now.  Maybe he felt it was more important to win in style than improve in GC?  It was his choice I guess.

And they scored everyone else together, which was complete bullshit.  If you click here to check out the results, the officials split both the Pro1 race and Women’s race results like a hilltop finish.  In the 1/2 race, they gave everyone the same time.  Over 70 riders. There was a crash at about a kilometer, but there still should have been big splits in the finish times.  Whatever.  They don’t really give a shit about the 1/2 riders at this race.  Anyway,  I secured my overall place a couple days ago with a lousy time trial.  I’m really here for 4 days of racing.

The pollen was still bad yesterday, but nothing like the day before in Devil’s Den.  My throat is all scratchy, but I wasn’t horrible.

We race today at 2:45.  It is the Hogeye circuit race.  Catherine left at 6:30 to go ride a time trial. Hopefully I’ll hand Tucker off after she is done doing her circuit race at noon.

I can’t say I’m all that spry this morning.  My legs are pretty tired.  I stayed up way past midnight glueing a new tire on my front wheel.  I did it outside, with hardly any light.  It might be the worst glueing job I’ve done in recent history.   I’ll be fine once I get moving.

Todays race has a harder climb and I think a lot of guys will get shelled.  We do 3 circuits which is around 90 miles. Good race mileage this weekend.

Okay, Tucker wants to go out and I should eat. 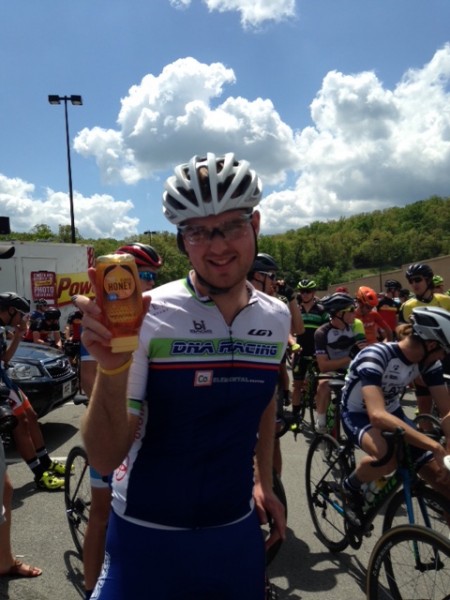 Jack Funk was carrying a whole honeybear with him. 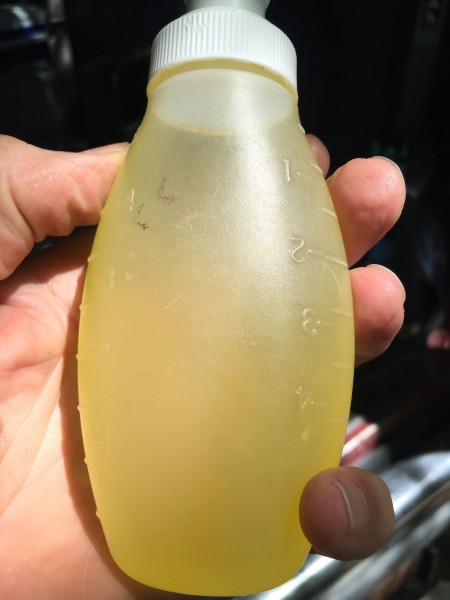 I had this flask of pickle juice. Sort of looks like pee. 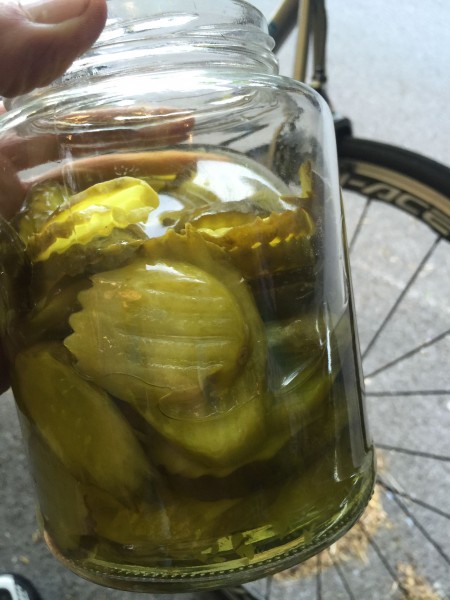 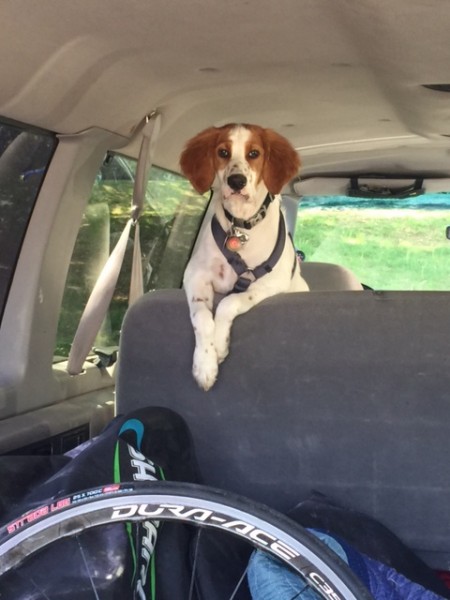 Tucker likes to keep track of his pack.