Can’t say I am too please with yesterday’s ride at Joe Martin’s time trial.  I’m not all that bummed, but the result was so mediocre it irks me some.  I have a few excuses, but in reality, if I would have ridden perfect, I wouldn’t have been all that pleased either.

The new time trial course is in Devil’s Den State Park still, 25 miles south of Fayetteville.  But the course goes up a hill on the opposite side of the park that has been used historically.  The hill isn’t much harder, it goes up about to about the same elevation.  But it is steeper at the bottom, with lots of switchbacks, then gets faster at the top, like a 40+mph short descent.

I started nearly last in the 1/2’s race, which was at 4:30.  I had went over early and had ridden the hill a couple times.  It is a little less than 3 miles.  I felt okay, but the pollen in the park was crazy.  Like super thick.  Descending down in the climb it was so bad that I could hardly blink.

I talked to a bunch of different guys about it.  It seems about 50 % of the guys I talked to thought it was horrible, the others didn’t even notice it.  Funny how that is.

I rode about 20 miles earlier, then another 10 before the time trial.  Here is how bad I was.  I warmed up on the old time trial course and averaged higher wattage warming up than during the race. Pretty bad power allocation, huh?

They say you are supposed to start easy finish hard.  I started hard and finished…. slow.  I caught my 30 second rider about 1/2 way up the hill and he went by me again about 500 meters to go.  Pretty terrible.  The last km was so bad, that if I had the 15 seconds I gave up I might have been somewhat pleased.  I started my timer with my 30 second rider and coming up to the finish, forgot  I should be subtracting 30 seconds, so was over 11 minutes, disgusted, so pretty much gave up. That was a huge error. I finished 40th out of a hundred and twenty guys, but in the Pro race it would have been in the 120’s out of 150.  Ouch.  Results are here.

So, I was a little rusty.  The pollen turned out to hurt too.  I did a couple nasal rinses and my throat still hurts this morning.  It seems better in Fayeteville than Devil’s Den.  I hope it isn’t an issue the next few days.

My new team-mate, Alex Hoehn, rode pretty great.  He caught me, he started 30 seconds back, and finished 7th.  He is young, I think he is just 18 or so, and the result was great.  It will be fun watching him during the 110 mile road race this afternoon.

One odd thing I noticed, and need to ask someone about it.  A bunch of the guys warming up for the Pro race, warm up in their street clothes.  It seems like probably 25% of the guys riding up the climb were just wearing baggy shorts and t-shirts instead of cycling clothes.  Same with the women.  I have no idea what that is all about.  It wasn’t that hot out.  Maybe they were going to race in super tight, hot skinsuits or something, but you still would think that they would warm up in team kits.  Pretty weird.

Last night we went over and had dinner with the Olathe Subaru guys.  Most of them ride for TradeWind Energy for cyclo-x so we are all pretty much team mates.  Benn and Garrick both had decent times up the hill, 10:26 ish, so they are looking good.

I’m riding better than the result, I think.  Maybe not, but I think so.  The next three days should be good.  I wanted to race this event for training.  Getting multiple race days in is important to get to a higher level of fitness.  At least for me it is. 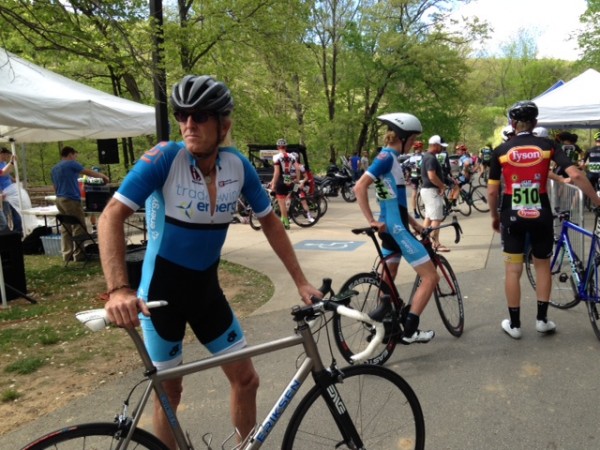 Waiting to start. Alex was wearing a time trial helmet. I didn’t notice that before the race. 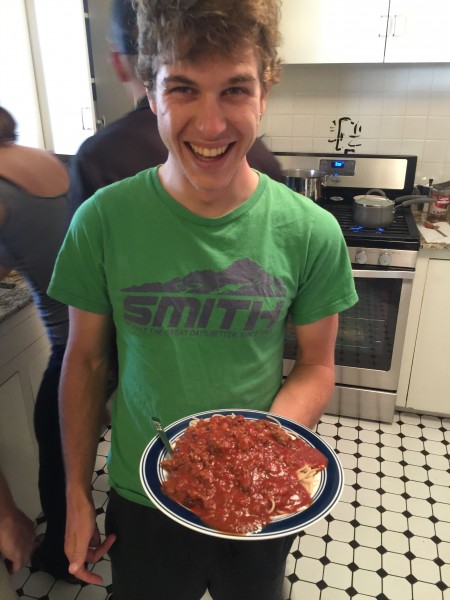 Here’s Benn Stover with just his first plate of spaghetti. Man, I remember when I could eat like that. 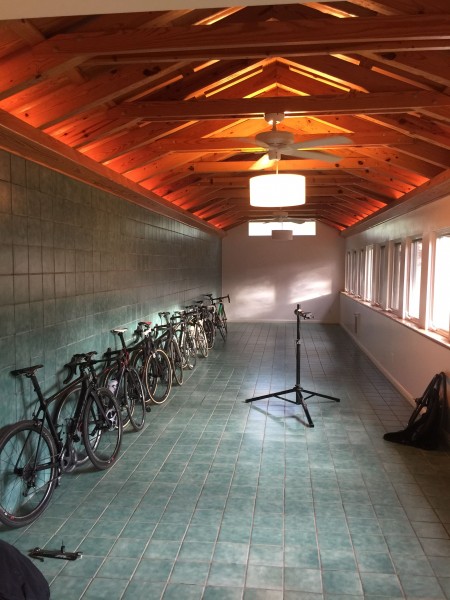 The house the Olathe Subaru guys are renting is cool. Eclectic cool, but still cool. It must of been built in the 60’s and has all these weird rooms and spaces.

Tucker has been eating a ton, but is still super skinny.