Yesterday was a weird day.  I went to Lawrence to see a chiropractor, then get a blood test.  The first went super, the 2nd not so.  The Labcorp in Lawrence wasn’t in operation so we were sent to Kansas City.  The first medical place that had a Labcorp was closed, so we had to go to another.

The blood test was next to awful.  It took 3 separate needle sticks to draw 3 test tubes of blood. But it was done.

Next was a stop at the Apple Store in Leawood.  My phone has been acting up for the past 3 weeks, every since I had the screen replaced.  The appointment was at 12:20, but took a really long time.  When I was waiting, I got a call from a friend from Arkansas, Kris French, who said he had read on my website that I was looking for a Pro team to ride on in Joe Martin.

I told him I was and he said he could help out.  He said the Seasucker/Guttenplan Coaching team was needing riders and he was sure I could ride for them.  I told him great.  Right after that, the guy at the Apple Store took my phone and reset all the setting so it was pretty much erased.  Then he told me that they needed to put a new screen into it again and I would have to leave it.

I told him I wasn’t going to leave the phone and I needed the settings restored.  He said that it might take up to an hour to download from the iCloud.  I told him I didn’t have an hour.  He said to do it when I got back to wifi.  So I left.

I left with a phone that didn’t have any numbers in it.  I didn’t know how to get back ahold of Kris or much of anyone else.  So I drove to Fayetteville and got to the race hotel in time for registration.  I told a few guys my plight and was finally directed to the head UCI official.

I could list lots of times this rule hasn’t been applied, in way, way bigger races than Joe Martin. Like the Tour.  But, it is what it is.

Like I said yesterday, the 1/2 race is going to be a ton harder than the Pro race.  It is real bike racing.  I don’t really know many of the riders in the race, so it is going to very hard to read. The 1/2 race pretty much does the exact same race as the Pro/1 race, but one lap shorter on Saturday, which is 20 something miles.  It should be fine.

I hope to get out  this morning and ride over to the new time trial course and ride up it at least once.  It is 3 miles instead of 2, heading up the opposite way in Devil’s Den State Park. Pretty hard climb.  I got to ride 20 miles or so yesterday and didn’t feel too bad.

Anyway, I didn’t get back from eating, then I ran Tucker and feed him, etc. until late.  And it was after 1 am before I got to bed, so I missed a ton of sleep.  Glad I headed down early for a relaxing day before the start of a stage race.  BTW, when I went to bed, my phone said 3 hours remaining until restored and it still isn’t done this morning. 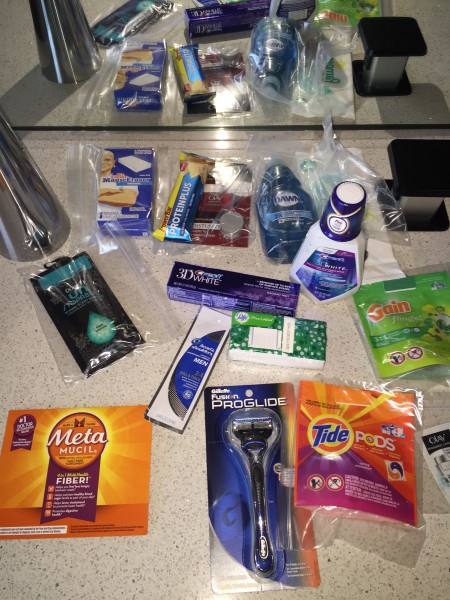 Craziest race bag I’ve ever received at a event. Pretty useful though. 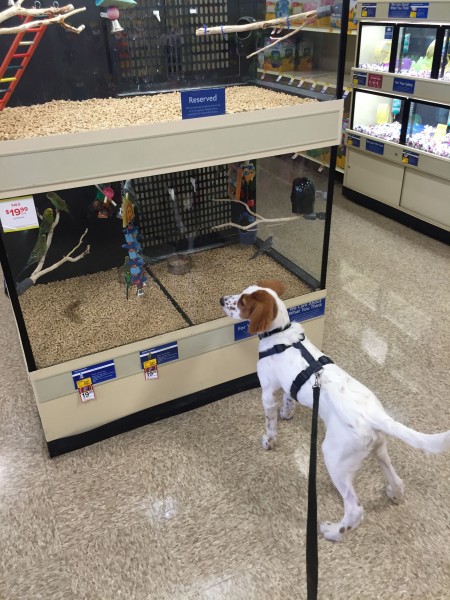 We stopped at a Petsmart to get Tucker a chew toy. He was fascinated by the birds of course.