I did a MTB marathon on Sunday.  It didn’t really seem like it lived up to the word marathon for cycling, but the way MTB racing has gotten, anything over 3 hours seems to be classified as a marathon.  It used to be just a race.  Now the races are more like cyclo-crosses and the marathons of old are ultra endurance events.  Anyway, it is what it is.

Chris Locke and his crew have been putting on races for years.  I had never made it over to one of his MTB races, but had a free weekend and am trying to switch it up some this year, so why not.  Chris promoted a full weekend of events with a duathlon on Saturday, MTB marathon Sunday morning, then a cross country at noon.

The race is on the Lawrence River trails, which is a nice trail system North of the river in Lawrence.   The trails have been there forever.  I raced there a bunch in the 90’s, but haven’t had the pleasure since.  They are a blast.  They flow like water.  Lacking technical challenges, but that is fine.

This was a local race, I think maybe 30 riders started the marathon race.  Brian Jensen, was racing with me.  He is from Denmark and had flown to Chicago on Saturday, to escort his mom, who was visiting, to escort her from Midway airport to O’hare International, then flew back. Pretty nice son.

So Brian was rested and I was tired.  I am always tired the day before a MTB race.  That is because I go to the course and to too much pre-riding.  Plus at MTB events, you tend to stand around a ton.  I really didn’t care because I knew that it was just for training and fun.

The race was pretty uneventful.  We didn’t even have to start that fast and I led into the singletrack.  Then it is singletrack for the next 9+miles.  After a few minutes, Brian must of gotten tired of watching me blow corners I couldn’t see and said he’d lead.  I moved over and Brian proceeded to be on the front the next two laps.

The course is by the river and is pretty sandy in sections.  The majority of the race it is hardpacked, but the back loop has a few sand pits.  Brian was super fast on the normal trail, but the back section we were both iffy.

I led the 3 laps, knowing we were going to do 5, which would be a tad under 50 miles.  The lap times were quicker than I had guessed, around 37 minutes, which is flying by MTB singletrack standards.

I stopped at the end of lap 3 to get a bottle out of a cooler.  I had frozen a couple bottles and it worked out fine.  Brian waited up and then we continued.

I got to win since Brian won the weekend before.  I know it seems a little weird not racing team mates at a MTB race, where team tactics don’t really apply, but you don’t really want to be racing your team mates at all, ever, so it was normal we didn’t.

I felt better the last lap than the previous 4.  My left leg wasn’t working great, but it wasn’t horrible either.  I think I could have done a pretty quick lap the final lap, but when we started to go fast, I slid my rear wheel out on some sand and I unclipped and jammed my left foot on the ground to stand upright it is sent a shock to my hip.  I decided to just bail on the fast lap time and ride in.

The weird thing about these trails is that it isn’t that big of a time difference between riding super hard and riding easy.  Like a minute a lap.  I think when you are going hard, you tend to come into corners too hot and then have to grab a bunch of brake and then re-accelerate.  Our last lap was hardly a minute slower than our other laps and it seemed like we were crawling.

I think we had the 3 fastest lap times of the day, which was nice I guess.  I think the course was more chewed up for the cross country riders, so it is really comparing apples to oranges.  I have the Strava KOM on the course now, so I guess that is something.   Strava KOM’s on MTB courses are sort of stupid, really.  It is like weather conditions for road Strava KOM’s.  Wind aided, or no mud is always going to be faster.

Anyway, I wasn’t too hurt from the day.  Yesterday I spent most of the day doing taxes, then got done just in time for the evening ride.  I drug the group over to the North Topeka postal annex to mail my taxes.  Then we did a good ride after.  I didn’t think I was going to get 45 miles in, but it was good.  I felt pretty good most of the way, then completely fell apart the last 5 miles.  I realized I hadn’t eaten anything since breakfast, which consisted of two pieces of toast and oatmeal with blueberries and maple syrup.  I guess I bonked.  I don’t bonk much anymore, so it was unfamiliar somewhat.

I plan to do some more MTB races throughout the year and this was a nice start.  I think my bike handling got better.  I know it got better during the race, it was downright ugly the 1st lap. Baby steps once again, always a learning or relearning process. 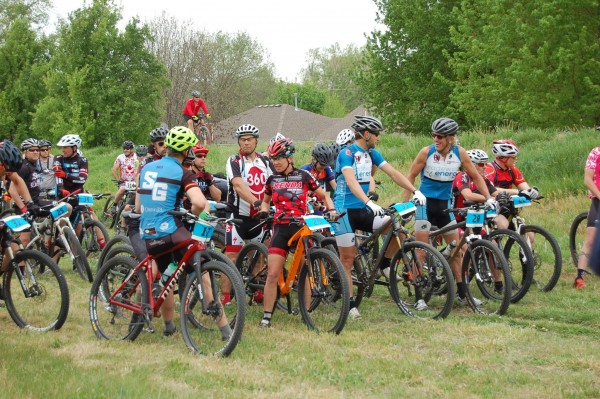 Waiting around for pre-race instructions. Catherine won the women’s event. She got a new dual suspension Specialized and it seems pretty crazy light. It was a good start for her re-entry back into the sport. 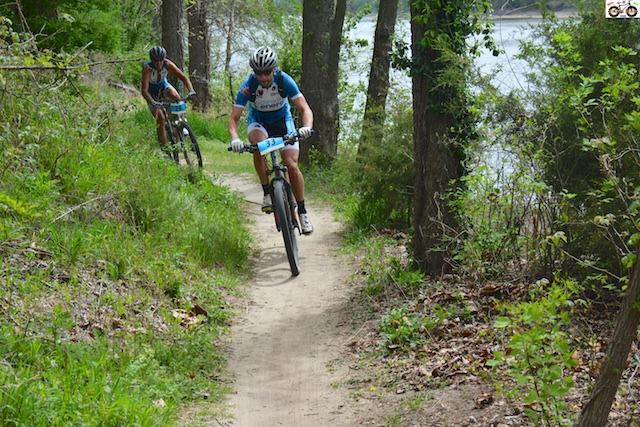 Brian leading the first couple laps. He was riding a dual suspension Eriksen and I was on fully rigid. Go figure. 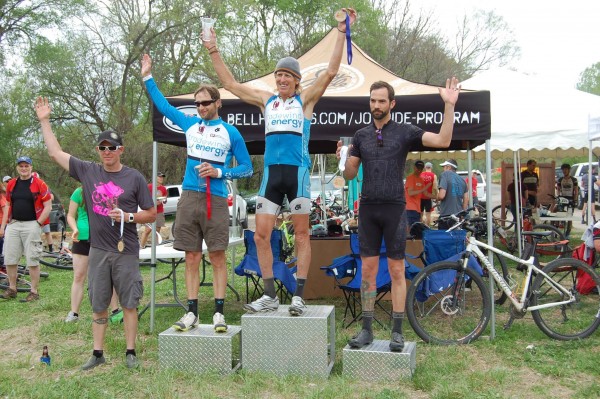 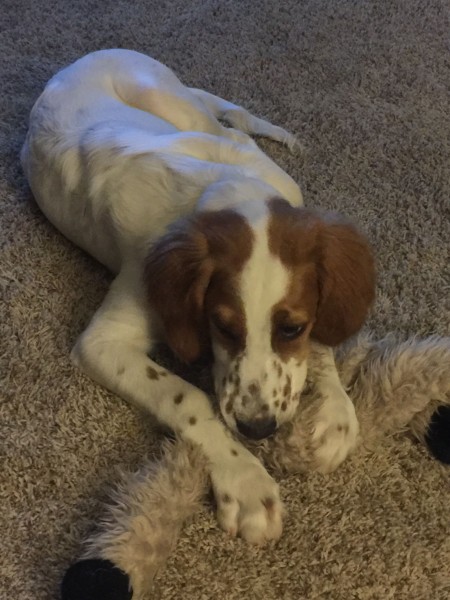 Tucker is always playful. If I don’t play with him, he always finds something else to do on his own. Pretty user friendly, except when he is chewing stuff up.