Brad Huff upset the UHC Blue Train and won the National Criterium Championships yesterday. He came around the final corner in 3rd and handily smoked John Murphy and  Luke Keough to win the race.

In my opinion, Brad is the fastest guy at the end of the race that is currently racing domestically here.   He is just unbelievable.

My sprint has deteriorated the last couple years.  Mainly through injury.  But even before then, I wouldn’t start a sprint on Brad’s wheel because when he jumped, I lost enough space that I was riding in the wind.  He is just too fast to follow.  Especially if it is downhill.

I’ve known Brad for a long time.  I think the first time he was on my radar screen was when I was racing the Missouri State Criterium Championships in Jefferson CIty and someone said that a guy that had finished on the podium at Criterium Nationals in Downer’s Grove was racing there.  That was probably 10-15 years ago.  I think he was riding for Mercy?  He didn’t make such an impression that day, but has many times since.

I can’t tell you how many times I’ve seen the guy do incredible rides.  Rides that don’t seem to be in his repertoire, but he has them hidden away for specific instances.

A while ago, I was in a break in Superweek with Brian Jensen, who was riding for Jelly Belly, and Brad, who I think was riding for TIAA-Cref, but don’t hold me to that.  It was at Whitnall Park and it is a couple mile circuit with a big hill.  Early on, Brad says he’s just along for the ride.  That it was between Brian and I for the win.  Then Brad proceeds to pull like crazy for the next 1 1/2 hours. Brian was going super that year, and was winning the series overall.  I was riding okay too.  I ended up winning and was trying to figure out why Brad was pulling so hard only to get third.

The next day, I think, was Brewer’s Hill Criterium.  A course that you wouldn’t think would suit Brad’s abilities.  Straight up a climb and down a descent.  Repeat.  Brad, and Brian, both made the break again.   There were a lot of Euro guys there that year and they had a couple guys in the move too.  Anyway, virtually the whole race, Brad was alone.

He would soft pedal up the climb, go hard over the top, bomb the descent and the final two corners just in time to reattach for 200 meters, just to get “dropped” at the bottom of the climb again.  It was that way for nearly 100 kms.

The break went around to lap us, but Brad wasn’t on.  I wondered why the other guys didn’t jsut go to the front and kill it, because it was obvious, at least to me, that Brad would win the race if he caught back on. He could win the race just on his cornering ability.  But they didn’t and he did.  He won, virtually riding a time trial the whole day.   I think Brad was just training the day before when I won.

I rode with Brad, last fall,  in Richmond, at the World Road Championships.  He came down with the guys from Rapha and was just hanging.  He was sort of down and out, saying that he had lost his contract with Optum (Rally).  I had raced with him at Labor Day in St. Louis and had seen his results in a couple hard criteriums on the East coast.  His worst day out East was 2nd, I believe. Anyway, I found it hard to believe that Jonas was going to let him loose.   Maybe if they quit sending him to Utah and the Pro Challenge in Colorado, his talents could be better ultilized?   I’m thinking Jonas is pretty pleased now that they worked it out.

Here’s his quote from after the race yesterday.

“They actually sat up into the last corner,” Huff said of the UHC lead-out as Keough and Murphy set up for their sprints. “But I was savvy enough and I knew their tricks, so I jumped around them and I got to their last three guys, and then out of the corner it was just kind of luck and leg speed.”

A little luck and leg speed.  Yep, that is an understatement for sure.  He is the fastest guy in the peloton and can make his own way to the finish, with extra energy to still sprint.  Pretty amazing.   Brad is a local boy, from Springfield Missouri.  Glad to see him get rewarded for his abilities, perseverance and effort.  Congratulations! 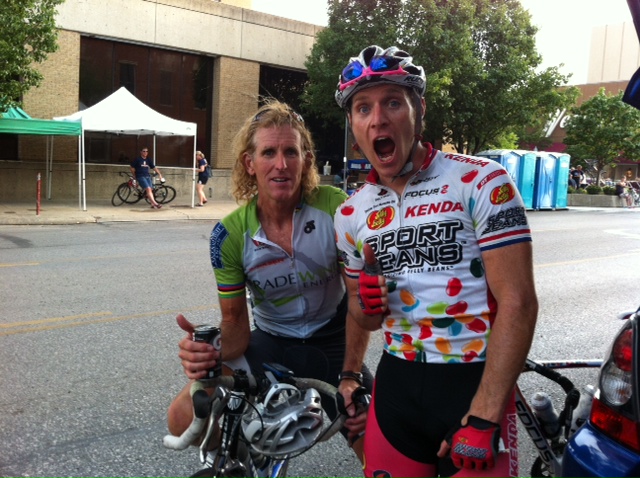 Brad and I after the Tour of Lawrence Criterium a few years ago. Sometimes Brad can come across as sort of a goofball, but his is just a nice guy having fun doing what he loves. 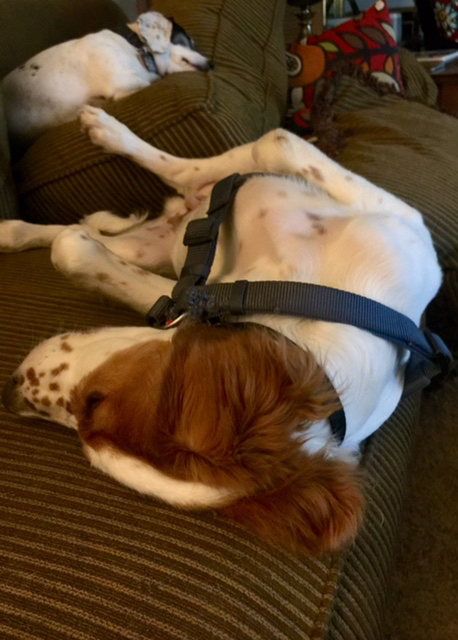 Tucker was pretty pooped out from hanging at the MTB race yesterday.